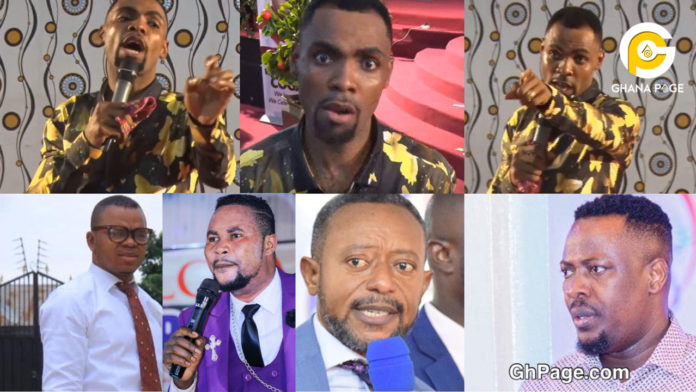 Controversial Ghanaian prophet, Reverend Obofour, the founder and leader of Anointed Palace Chapel has made a shocking revelation about pastors in Ghana. According to Obofour, no pastor in Ghana was called by God.

Obofour claims that it is foolishness for people to tag him and other few prophets as fake and conclude that they were not called by God because no pastor was called by God.

He dared any pastor who claims he was called by God to come and show him the number God called him on or show him when an angel descended and told him God wants him to do his work.

The controversial man of God explained that God doesn’t call anybody to do his work as some pastors want people to believe. He claims being a man of God is just a career so all pastors should shut up.

Obofour warned pastors from Pentecost, Presbyterian Church of Ghana, Roman Catholic etc to stop tagging secular pastors as fake and not called by God. He further dared them to prove their calling.

WATCH THE VIDEO BELOW

Pastor Kwaku Antwi aka Reverend Obofour was speaking as a guest speaker at Prophet Abruku Abruka’s church called COGA at Sowutuom, a suburb in Accra.

No Ghanaian pastor has been called by God - Rev. Obofour reveals

Mr Eazi And His Rich Girlfriend, Temi Otedola Narrate How They Met And Started Dating | Audio