The police have arrested Ernesto Yeboah for organising a vigil for the late George Floyd, who was killed by a white police officer who knelt on his neck for almost nine minutes.

The police say Mr Yeboah and his Economic Freedom Fighters were in breach of the Public Order Act.

The group told Class 91.3FM’s Executive Breakfast Show producer Nii Marmah Boye in an interview that armed police and military personnel stormed the vigil grounds at the Black Star Square and whisked Mr Yeboah away to either the Osu or Ministries police station.

Nii Marmah, however, reported that Mr Yeboah was taken to the police headquarters.

The group insists its leaders notified the police five days ahead of time.

“We’re going to storm the police station where they’ve taken him”, Mr Abeiku Adams, Commander in Charge of Solidarity of the Fighters told Nii Marmah.

A few days ago, the Accra Regional Police Command warned the public against holding any George Floyd-related protests.

The lynching of Mr Floyd in Minneapolis on Monday, 25 May 2020 has sparked simultaneous protests in virtually all States in America amid looting and rioting.

A statement signed by DSP Effia Tenge, head, Public Affairs Unit of the Accra Regional Police Command, said the attention of the police has been drawn to “an intended demonstration against the United States trending on social media and slated for tomorrow, 2 June 2020”.

“The Command wishes to state that it has not been notified on any demonstration”, the statement said, adding: “Moreover, the restrictions on public gatherings, demonstrations and rallies, among others, to contain the COVID-19, are still in force and the public is being advised to disregard the open call for a march”. 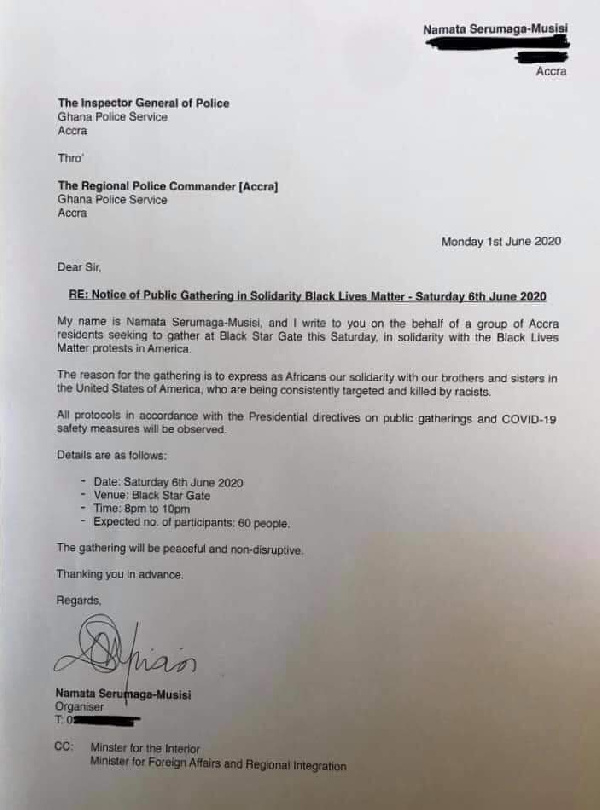 According to Nana Akufo-Addo, it cannot be right that, in the 21st century, the United States, “this great bastion of democracy,” continues to grapple with the problem of systemic racism.

In a Facebook post, Nana Akufo-Addo said he hopes the tragic death of George Floyd will inspire a lasting change in how America confronts head-on the problems of hate and racism.

The full post read: “Black people, the world over, are shocked and distraught by the killing of an unarmed black man, George Floyd, by a white police officer in the United States of America. It carried with it an all too painful familiarity and an ugly reminder. It cannot be right that, in the 21st century, the United States, this great bastion of democracy, continues to grapple with the problem of systemic racism.

“On behalf of the people of Ghana, I express my deep condolences to the family and loved ones of the late George Floyd. We stand with our kith and kin in America in these difficult and trying times, and we hope that the unfortunate, tragic death of George Floyd will inspire a lasting change in how America confronts head-on the problems of hate and racism.”

The white officer has since been arrested and charged with 3rd-degree murder and manslaughter.

The death of George Floyd, who told the white cop he could not breathe while he knelt on his neck, has sparked a week-long protest in the US.

The protest has stretched to New York, Atlanta and Portland where thousands gather without recourse to social-distancing in the wake of the coronavirus pandemic.

The protestors are demanding that three other police officers who were involved in the incident be arrested, too, and made to face the law.

This is not the first time an unarmed black man has been killed by a white cop in US.

Watch below how Ernesto Yeboah was arrested by the police.