The President, H.E Nana Addo Dankwa Akufo Addo may be compelled to rescind any decision for the retention of the Volta Regional Minister, Dr. Archibald Yao Letsa for his second administration, as some pressure group within the New Patriotic Party (NPP) are threatening to demonstrate against his appointment.

Though too early, it is a timely action on their part to push an agenda they believe would satisfy the expectations of the grassroots and the people of the Volta Region.

The group christened; “Volta NPP Grassroot for Justice” had stated categorically that they would reject the reappointment of the former Regional Minister to the area.

The group in a release dated 20 January 2021, disclosed that they will be embarking on a mammoth demonstration to register their displeasure with the choice of appointment which they claim to have learned of in the grapevine.

The group had dubbed the intended demonstration; “Enough is Enough Demonstration“, and outlined the route they would take as well, in their press release.

The police have been duly informed however no response has been given on their part. 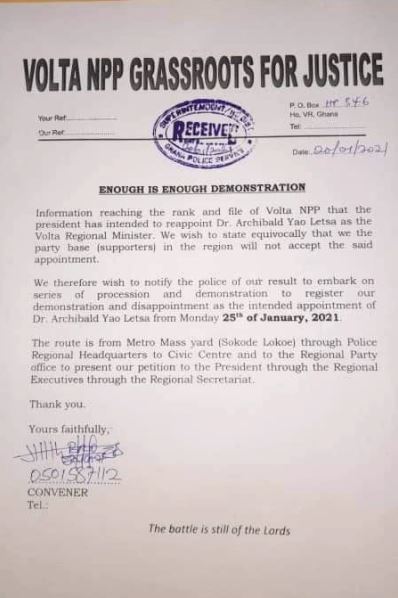 Per the release, the intended demonstration will start from the Metro Mass yard at Sokode Lokoe through the Regional Police Headquarters to the Civic Center and then finally to the NPP Regional Office, where they will file their petition with the Regional Secretary on behalf of the party executives and the President.

No reasons or whatsoever had been given for which Dr. Archibald Letsa must be excluded from President Akufo Addo’s appointment.

It will be too early and bad to speculate until the group comes out on the 25 January 2021, which falls on next week Monday.

It would be quite an interesting development to learn of what becomes of their petition and demonstration when the President concludes on his appointment in the coming weeks.