Witnesses describe chaotic scene as protesters ran and jumped over barricades to avoid being hit by truck.

Live video of the incident showed demonstrators rallying against the death of George Floyd – an unarmed Black man who died on Monday after a white police officer knelt on his neck – running as the truck appeared to charge them. The truck then came to a stop, and protesters begin to gather around it. Police said no serious injuries among the protesters had been reported.

“[We] jumped over the barricade and into the grass” as the truck approached, said Sydney Rubel, who witnessed the incident.

Rubel told Al Jazeera that she did not see the truck coming, but was alerted by other protesters to move out of the way.

Natalie Jokinen, another witness, told Jazeera that she and dozens of others, among them children, had been protesting peacefully when the incident took place.

“We were all sitting down, we could hear the truck getting faster and faster,” Jokinen said, adding that she was “just terrified”, by the events. 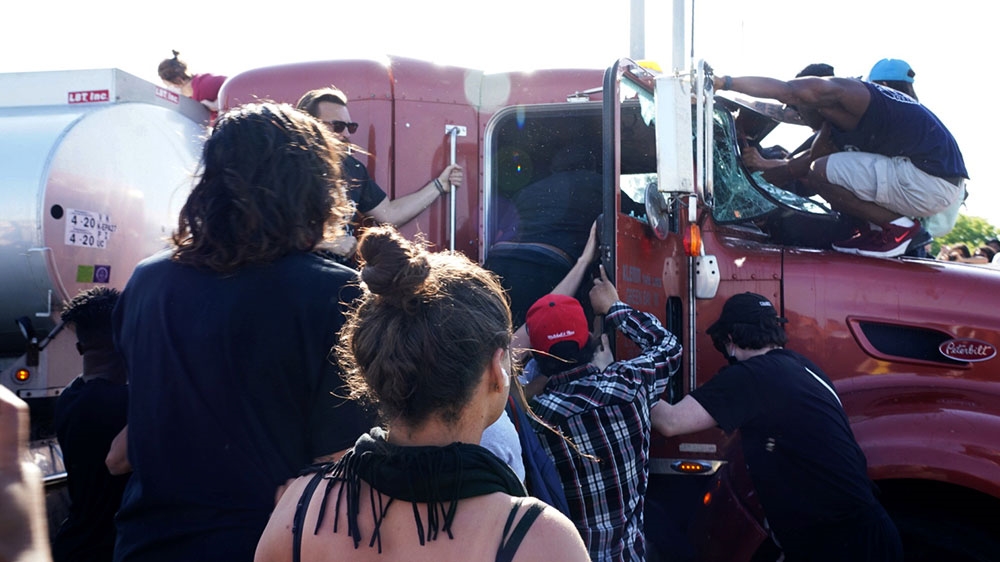 Protesters look inside a truck that was driven into a rally against the death of George Floyd on the I-35W bridge in Minneapolis, Minnesota [Go Nakamura/Reuters]

In a series of tweets, John Reinan, a reporter for the Minneapolis Star spoke to witnesses who said the driver drove the demonstrators at about 30 mph (48 kph).

“A truck came. The horns were blaring. It was picking up speed. It was ploughing down the highway into the protesters. It was the most terrifying thing I’ve ever seen,” Reinan tweeted, quoting a witness named Melanie Ramos.

Very disturbing actions by a truck driver on I-35W, inciting a crowd of peaceful demonstrators. The truck driver was injured & taken to a hospital with non-life threatening injuries. He is under arrest. It doesn’t appear any protesters were hit by the truck. #MACCMN

The Minnesota Department of Public Safety said in a tweet that the actions of the driver were “very disturbing” and incited “a crowd of peaceful demonstrators”.

Officials said that the driver suffered “non-life threatening injuries” and has been arrested. An investigation has been launched.

The scene from the overpass where a semitrailer ran into a group of protesters. Law enforcement and protestor face off. "There were babies next to me, said one eye witness, who had already left the scene. "I puked as soon as I got to a safe spot." pic.twitter.com/XGO4xYf97c

The truck had a Kenan Advantage Group logo on it. The company said in a statement that it had been “informed of an incident involving one of our independent contractors in Minneapolis”. It added it would cooperate with authorities.

Other witnesses told Al Jazeera that protesters were throwing bikes in front of the truck “to try to get it to stop”.

Sunday’s incident took place on the sixth day of protests in Minneapolis over police brutality and Floyd’s death.

Protesters are demanding all four Minneapolis officers involved in Floyd’s death be charged. So far, only Derek Chauvin – the white officer who knelt on Floyd’s neck for nearly nine minutes while Floyd pleaded “I can’t breathe” – has been arrested. On Friday, he was charged with third-degree murder and manslaughter.

Protocols for the reopening of mosques from June 5

All Branches Of Angel Obinim’s Churches Close Down, Reasons Revealed