Kobe Bryant’s wife has posted a heartbreaking photo of her late husband and daughter Gianna as her Instagram profile image after they were killed in a helicopter crash.

The former NBA superstar’s wife, Vanessa Bryant, has not spoken out since Kobe and their 13-year-old daughter tragically died on Sunday when his helicopter crashed in California.

Vanessa publicly acknowledged their shock deaths on Wednesday when she changed her Instagram profile photo to one of Kobe and Gianna embracing and smiling at each other.

The photo was taken during an NBA all-star game in Toronto in 2016, which was among his last all-star appearances. 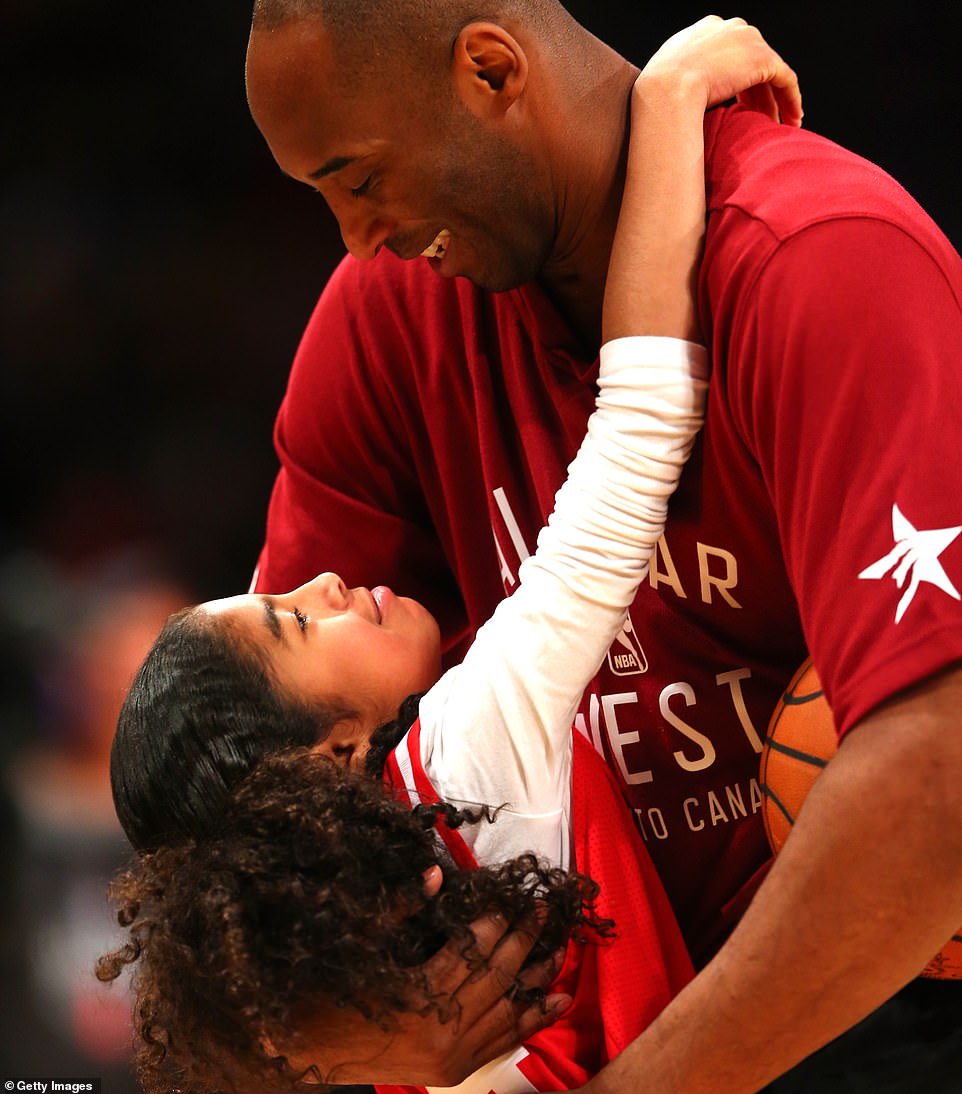 It is not clear if she made the account, which has more than one million, followers, private before or after the crash.

Sources have said Vanessa has been trying to stay strong for their three surviving daughters but is devastated, numb and can barely keep it together.

‘She can’t finish a sentence without crying. But she is working very hard to pull it together for the other girls. She now has to be the strong one,’ the source told People.

Bryant met Vanessa back in 1999 when she was 17 and was working as a background model on a music video.

They got engaged six months later and married in 2001.

The couple have four children together: Gianna, 13, who was killed alongside her father, Natalia, 17, three-year-old Bianka and seven-month-old Capri.

Kobe would often share heartwarming photos and tributes to his family on social media. 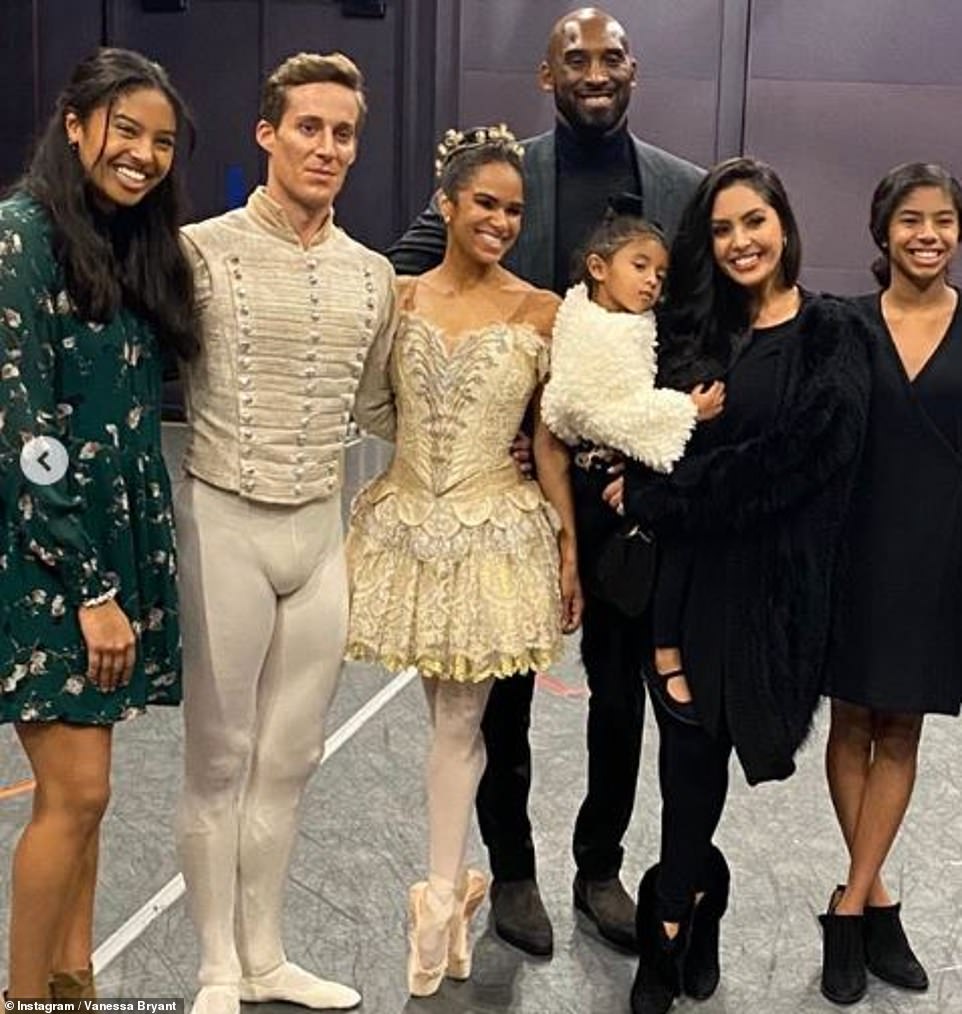 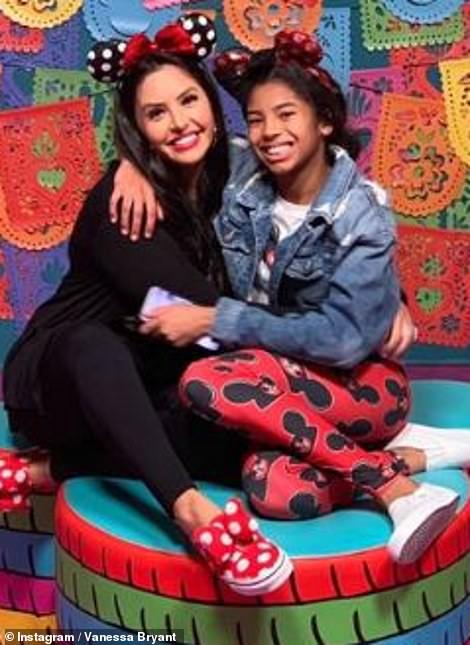 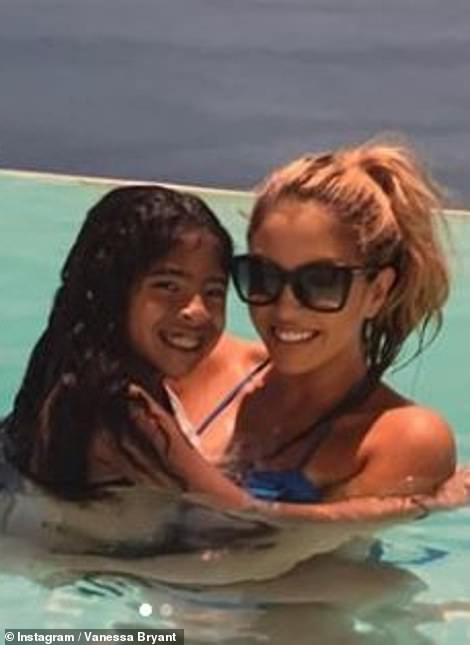 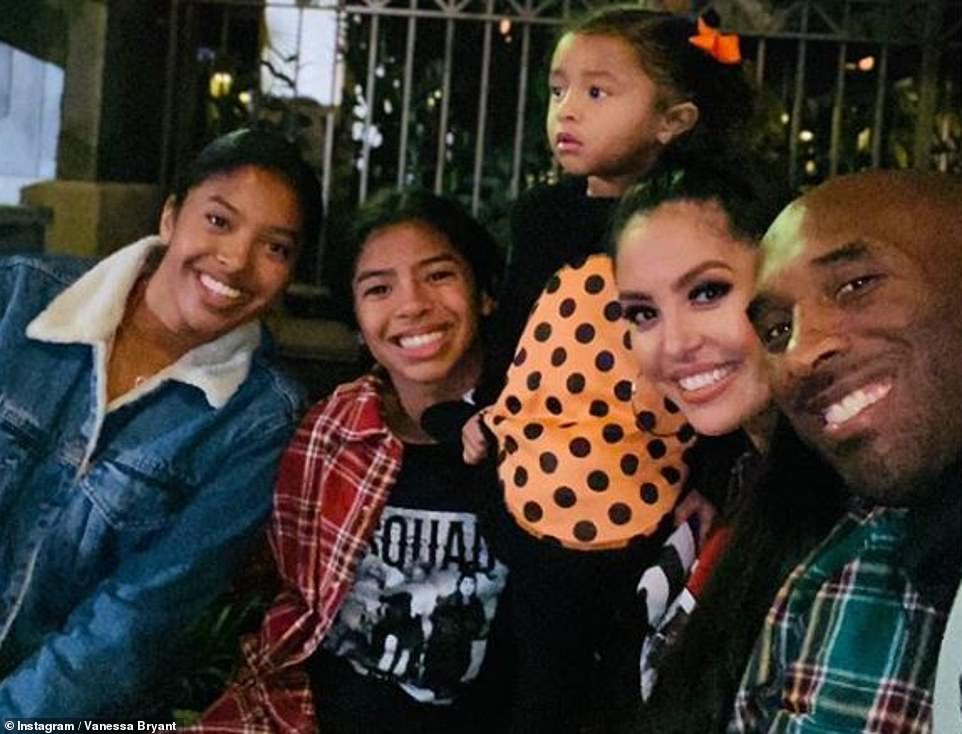 Vanessa and Kobe, who married in 2001, are pictured above with their three eldest daughters: Natalia, 17, Gianna, 13, and three-year-old Bianka 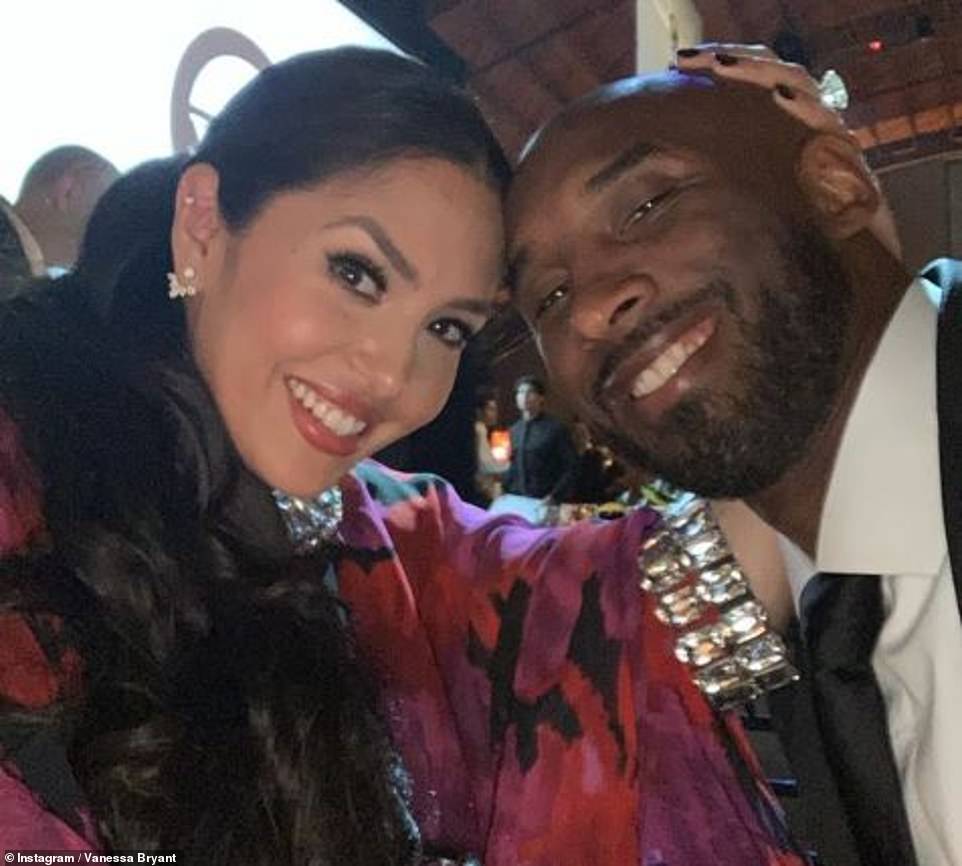 Bryant met Vanessa back in 1999 when she was 17 and was working as a background model on a music video. They got engaged six months later and married in 2001

In November 2019, he called Vanessa his ‘Queen’ and their daughters ‘princesses’ in a touching post to mark 20 years since they first met when she was at high school.

‘On this day 20 years ago I met my best friend, my Queen @vanessabryant I decided to take her on a date to Disneyland tonight to celebrate old school style (pre 4princesses),’ he wrote.

‘I love you my mamacita per sempre,’ Bryant captioned a throwback photo of the couple along with a photo of them at the time in the Anaheim, California, theme park.

Kobe, Gianna and seven others were killed on Sunday when their helicopter went down in a fiery crash in Southern California on their way to the 13-year-old’s basketball game.

They were killed alongside John Altobelli, 56, longtime head coach of Southern California’s Orange Coast College baseball team; his wife, Keri; and daughter, Alyssa, who played on the same basketball team as Bryant’s daughter; and Christina Mauser, a girls’ basketball coach at a Southern California elementary school. 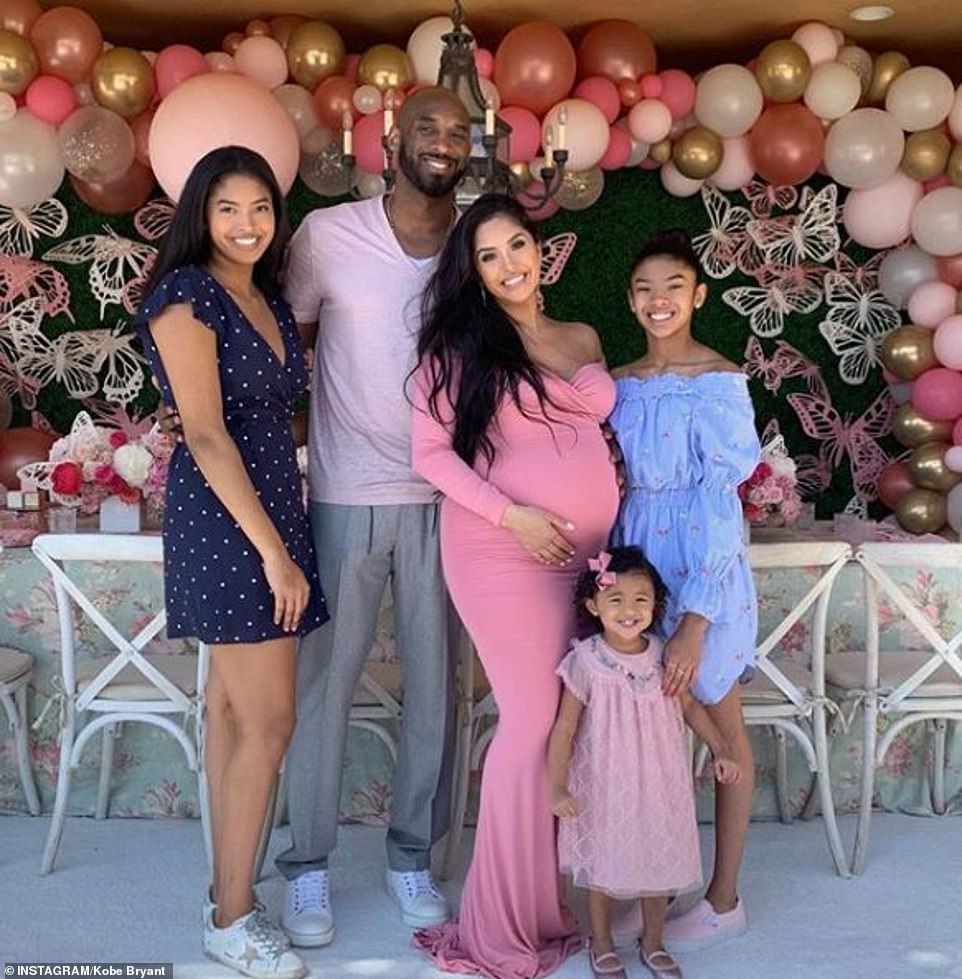 The NBA legend and Vanessa married in April 2001 when he was 22 and she was 18. Together they have four children: Gianna (far right), 13, who was killed alongside her father, Natalia (left), 17, three-year-old Bianka (right, in pink), and seven-month-old Capri 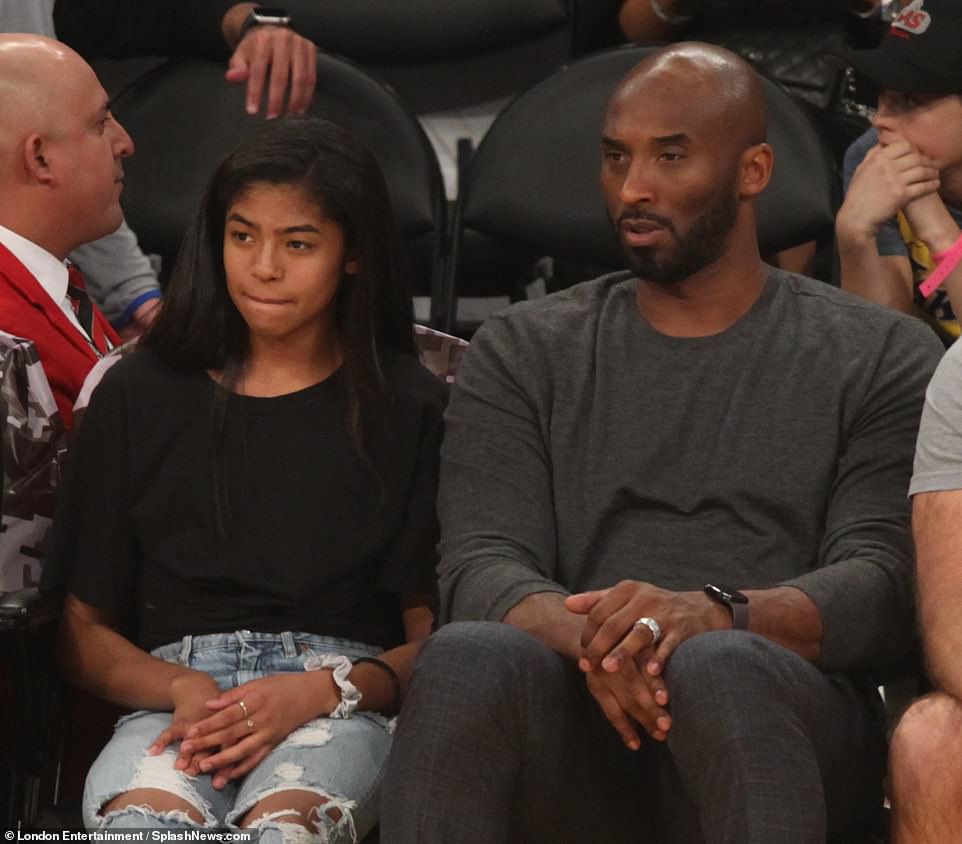 Bryant, 41, and his 13-year-old daughter, Gianna (pictured in November 2019) were both killed in the crash

Another young player, Payton Chester, was also killed in the crash along with her mother Sarah Chester.

The pilot, Ara Zobayan, 50, was the ninth victim. He was the chief pilot for the aircraft’s owner, Island Express Helicopters.

The company said the pilot had more than 10 years of experience and had logged more than 8,000 flight hours.

He also was a flight instructor who had flown Bryant and other celebrities several times before.

Investigators and experts have since said the helicopter didn’t have a long-recommended warning system to alert the pilot he was too close to the ground.

It is not clear whether that system would have averted the foggy-weather crash.

The pilot, Ara Zobayan, had been climbing out of the clouds when the chartered aircraft banked left and began a sudden and terrifying 1,200-foot descent that lasted nearly a minute

The last of the victims’ bodies were recovered on Tuesday and coroner’s officials said the remains of Bryant, Zobayan and two other passengers were identified using fingerprints. 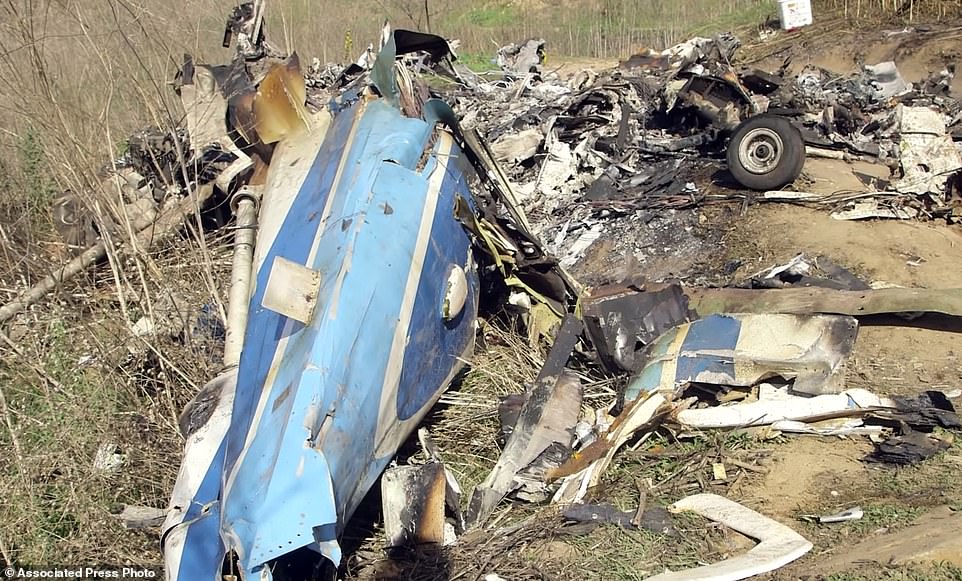 After destroying the face of an innocent Kotoko fan with punches & technical knockout, Patrick Allotey speaks for the first time