In a final burst of campaigning, US President Donald Trump and his Democratic challenger Joe Biden have criss-crossed Midwestern states that may hold the keys to the White House.

Mr Biden went on the offensive in Iowa, a state that voted for Mr Trump by 10 points in 2016.

Mr Trump made a play for Minnesota, which voted narrowly for Hillary Clinton four years ago.

But his advantage over Mr Trump is narrower in the handful of US states that could vote for either candidate and ultimately decide the outcome in four days’ time.

More than 85 million people have voted early, 55 million of them by post, setting the US on course for its biggest voter turnout in over a century.

The Democrat has taken a more measured pace to campaigning than his rival, spending much of the election cycle at his home in Wilmington, Delaware, citing coronavirus restrictions.

But on Friday he sprinted through Iowa, Wisconsin and Minnesota on his busiest day yet.

When Mr Biden was last in Iowa, in January, his presidential campaign was in serious jeopardy after he was defeated in a party vote to choose the Democratic challenger to Mr Trump.

Now Mr Biden could be days away from becoming the 46th president of the United States.

He made a 22-minute appearance at a drive-in event in a car park outside the Minnesota State Fairgrounds.

But a throng of Trump supporters turned up and tried to drown him out by honking their horns during his speech.

“These guys are not very polite, but they’re like Trump,” Mr Biden said.

He was interrupted again later in the speech while urging a national mask-wearing mandate to counter coronavirus. 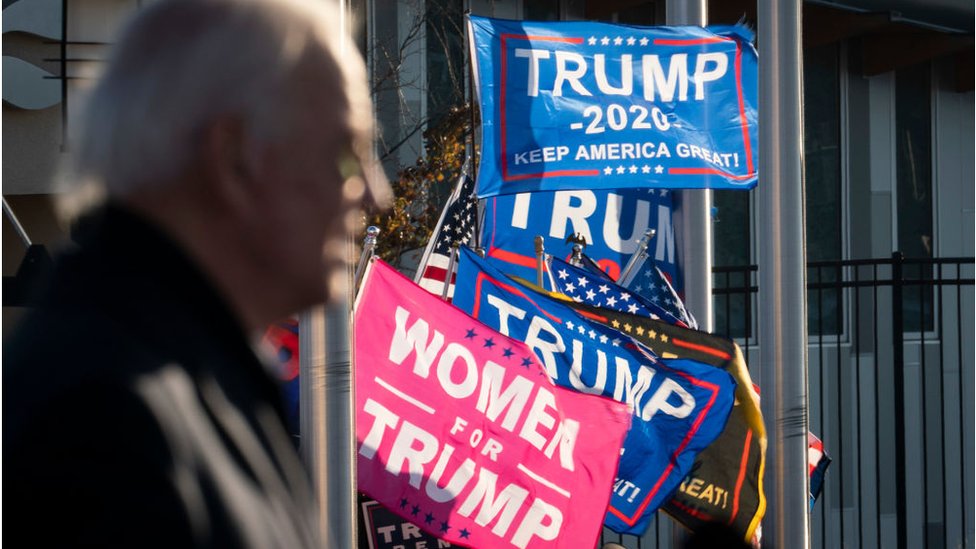 “This isn’t a political statement like those ugly folks over there beeping their horns,” Mr Biden snapped, eliciting a renewed cacophony of vehicular horns.

The Democrat used many well-honed attack lines on his rival, saying: “Donald Trump has waved the white flag and surrendered to this virus but the American people don’t give up, they don’t cower and neither will I.”

He also added a local pitch to the state’s Somali diaspora.

“That’s why he [Mr Trump] shamelessly equates Somali refugees, folks seeking a better life in America, contributing to this state and our country, with terrorists.” He added: “We need a president who will bring us together, not pull us apart.”

Mr Biden’s visit to Minnesota, where he holds a steady lead in opinion polls, was interpreted by some election-watchers as a sign that the Democrat’s campaign was anxious about the state.

The candidate told reporters in Delaware as he set out for the Midwest: “I don’t take anything for granted.”

His campaign war chest, double the size of Mr Trump’s, has earned him the luxury of making a play for conservative states such as Iowa and Georgia, where a Democrat has not won the presidency since Bill Clinton in 1992.

Democrats even dream of flipping Texas, which has not voted for one of their White House contenders since Jimmy Carter in 1976. If Republicans lose the Lone Star state, it would be all but impossible for the party to win the presidency again without broadening its voter coalition.

More than nine million Texans have already cast ballots, eclipsing the 2016 turnout there. 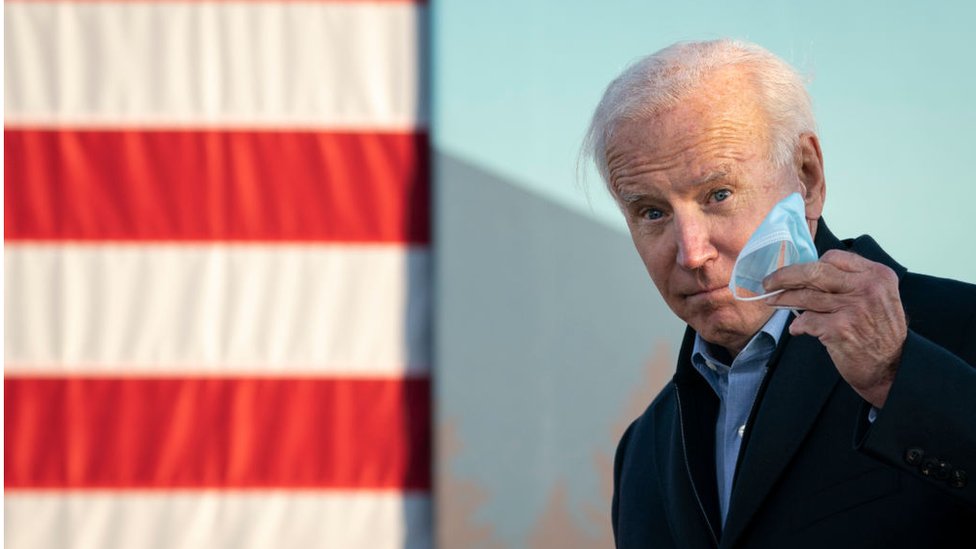 The Republican president is focusing over the last few days on historically Democratic industrial states such as Michigan, Wisconsin and Pennsylvania that he picked up four years ago in his against-all-odds victory.

On Friday he also headed to Minnesota, which has not voted for a Republican presidential candidate since 1972.

Mr Trump lost the state by just 44,000 votes four years ago. It is one of the few that Mr Trump is trying to turn Republican this year.

In his first stop of the day near the car-making hub of Detroit, Michigan, the president acknowledged the steep odds, adding: “But we’re very popular [in Minnesota] because I helped with that disaster in Minneapolis.”

The president was claiming credit for the Democratic governor of Minnesota’s decision to send in the National Guard to quell riots in Minneapolis following the police killing of George Floyd.

At that 73-minute event, he also teased Fox News host Laura Ingraham, who was in the audience, for being “very politically correct” by wearing a face mask.

Attendance at the president’s final stop in Rochester, Minnesota, was capped at 250 people at the insistence of state and local officials, citing coronavirus prevention, though Mr Trump claimed it was an attempt to make him cancel the rally.

He told the crowd: “When large numbers of rioters and vandals sacked the city of Minneapolis earlier this year, Keith Ellison [Minnesota’s Democratic attorney general] did not ask them to submit a permit.”

Referring to coronavirus lockdowns, he added: “Keith Ellison and Joe Biden want to imprison you in your homes while letting anarchists, agitators and vandals roams free as they destroy your cities and state.”

He went on: “Biden and the Democratic class treat law enforcement like criminals and they treat criminals like heroes.”

“One of the most crucial issues for Minnesota in this election is the subject of refugees,” Mr Trump continued. “This is a vital matter of national security.” 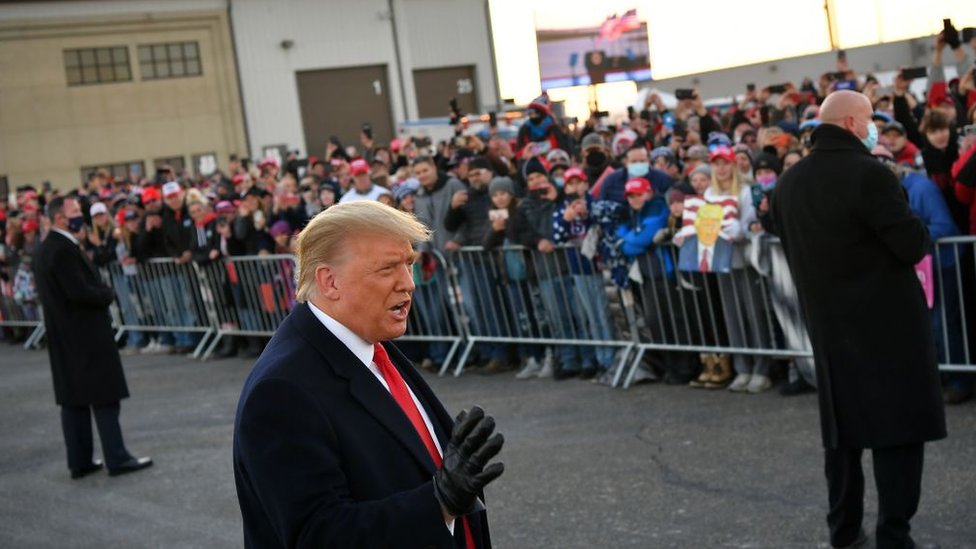 He touted his directive to suspend entry of refugees to the US from countries “compromised by terrorism” and also referred to the stabbing attack at a church in Nice, France, allegedly by a Tunisian migrant.

Mr Trump’s visit to Minnesota came a day after a federal court in the state ruled that all ballots received after election day should be considered late.

The verdict overturns the state’s plans to continue counting mail-in ballots for seven days after the election, and is a legal victory for the president’s fellow Republicans.

Mr Trump is planning a head-spinning 13 rallies over the next three days.

Loading...
Tags
Biden and Trump Midwestern tug-of-war US US election 2020

Nice attack: Grief and anger in France after church stabbings