US president says Beijing wants his Democratic opponent, Joe Biden, to win to ease pressure over trade and other issues.

President Donald Trump said on Wednesday he believes China’s handling of the coronavirus is proof that Beijing “will do anything they can” to make him lose his re-election bid in November.

“China will do anything they can to have me lose this race,” Trump said in an exclusive interview with Reuters news agency at the White House.

Trump said he was looking at different options in terms of consequences for China over the virus, also known as COVID-19.

The Republican president, often accused of not acting early enough to prepare the United States for the outbreak, said he believed China should have been more active in letting the world know about the coronavirus much sooner.

Asked whether he was considering the use of tariffs or even debt write-offs for China, Trump would not offer specifics.

“There are many things I can do,” he said. “We’re looking for what happened.”

Before the coronavirus pandemic began, the US and China were already engaged in a trade war that has resulted in billions of dollars in tarrifs.

For weeks, Trump has been heaping blame on China for a global pandemic that has killed people nearly 61,000 people in the US according to data compiled by Johns Hopkins University and thrown the economy into a deep recession undermining his campaign for a second four-year term.

On Tuesday, he had said he wants to conduct “serious investigations” into China’s handling of the pandemic.

“We’re doing very serious investigations … We are not happy with China,” Trump said. “There are a lot of ways you can hold them accountable.” 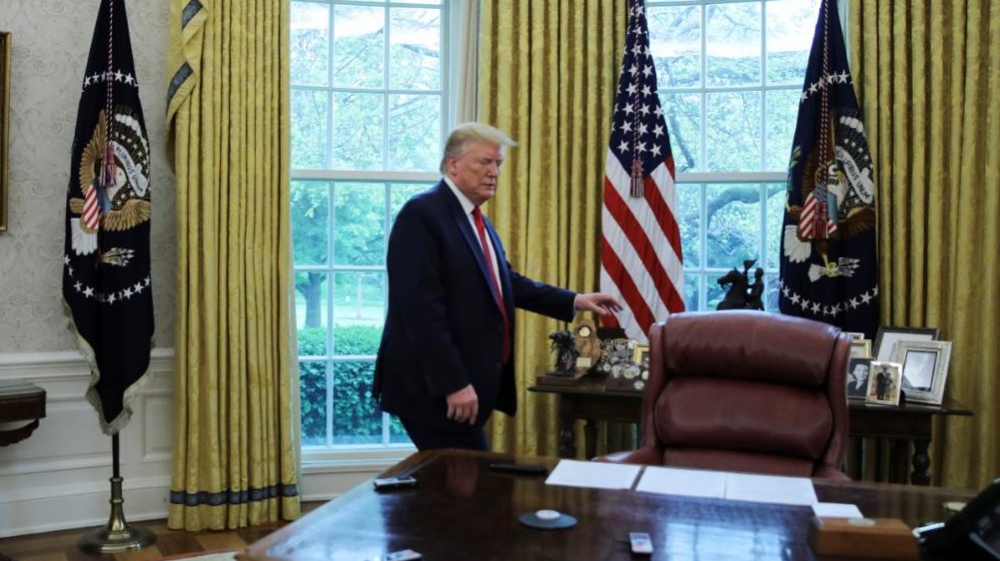 Trump had previously referred to COVID-19 as “Chinese virus”, igniting a war of words with Beijing, which accused the US military of bringing the disease to Wuhan.

Trump said he did not expect the election to be a referendum on his handling of the coronavirus pandemic and expressed surprise that the former vice president was doing well in the polls.

“I don’t believe the polls,” Trump said. “I believe the people of this country are smart. And I don’t think that they will put a man in who’s incompetent.”

Trump’s public statement contradicts with a New York Times newspaper report, which said that the president had reportedly erupted in anger during a phone call with his campaign manager over the recent polling.

Trump also told Reuters news agency that South Korea had agreed to pay the US more money for a defence cooperation agreement but would not be drawn on the amount of the contribution.

The US president had publicly complained in recent weeks against Seoul and rejected a sum it offered to the cost of US military forces deployed in South Korea.

At least 28,000 US troops are stationed in South Korea.

South Korean legislators said US officials had demanded up to $5bn a year, about five times the 1.04 trillion won ($896m) Seoul agreed to pay in 2019.

JUST IN: Kennedy Agyapong’s life in danger as Assassins plan to eliminate him on Thursday

WATCH: Kennedy Agyapong And His Family To Be Murdered On Thursday, Hot Video And Details Drop