The life of Thomas Partey snuffed out of him in stray-bullet style. Too quickly to afford him the luxury of screaming or writhing in pain, eyewitnesses say.

It would seem as quick as power is snuffed out of homes by the Powe Distribution Service (PDS) officials on a mass disconnection exercise in the Eastern region. 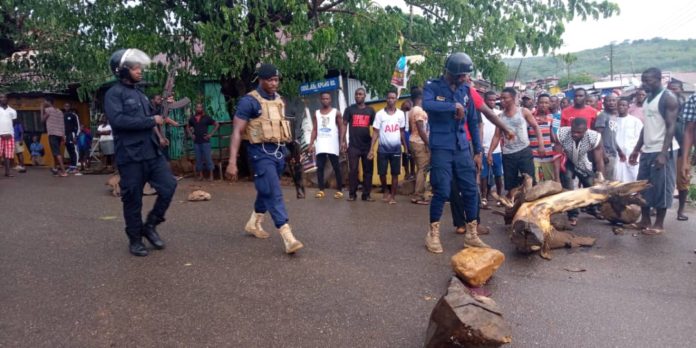 The 14-year-old has died over a 3-year old problem – “extremely outrageous” electricity bills in the Lower Manya Krobo area.

The bills have “quadrupled”, a resident, Teye, told Joy New Friday as a post-mortem continued on Wednesday’s violence but not on Wednesday’s fatality.

He said in 2014, they realised their bills had not been forthcoming. Nobody pays bills with smile and so they did not immediately frown.

But they would later inquire the cause of the delay from ECG (now PDS) district offices. It would be coming, assurances came in as residents braced for an end to the freebies.

In a community of small businesses, traders and farmers, some have bills piled up to 7,500.

Their shock was comforted by ridicule knowing surely something is wrong somewhere. And something was wrong, Teye said he found out after another visit to the ECG office with somewhat polite anger.

According to him, ECG officials explained a defective billing software was the problem. It would be resolved, assurances came and residents heaved a sigh of relief.

“But nothing was done about it,” Teye would come to learn after more visits bore little fruit and more stonewalls. Whinings, pleas, threats – did nothing to change an official conclusion that the bill was as true as an audit report – they must pay.

The Tema Region General Manager of the PDS, Joseph Mensah Forson, has explained there was no overbilling. Residents may have used the power freely for “probably one, two, three years.”

But inside the mind of the residents, something snapped. A cork popped off.  And they quickly learnt the language of violence.

That was how the Somanya ECG office was attacked that Friday in May 2017.

‘Mayday, Mayday, Mayday we are under attack’, as ECG officers barricaded themselves inside the newly commissioned office as a spontaneous throng laid siege, smashing glass windows.

Twelve (12) were arrested as the state laid down the law. What has not been arrested is the problem.

Three days after the arrests, the residents struck again. Peace and disorder are now switches that go on and off as the power goes on and off in Lower Manya Krobo.

Power disconnection exercises in the area is a national security exercise. A cohort of police officers provide cover and discourage threats as PDS officials work to switch off the power. After severe injuries, serial destruction of properties and several arrests, the disagreement over bills had led to the first kill at Agormenya.

Youths in their hundreds stormed down the road leading to the office of the Municipal Chief Executive, Eastern Regional Police Public Relations Officer, Deputy Superintendent of Police (DSP), Ebenezer Tetteh.

Hurling stones, brandishing deadly implements, the angry youth took their chances against police firepower that came in waves of reinforcements. In the hot afternoon, Thomas Partey was allegedly hit and his lifeless body left in the sun for several hours.

Sammy Partey, uncle to the deceased has wept. He has been taking care of Thomas after his father died when he was four years, he told JoyNews.

He was a “jovial” boy who could “throw off your sorrow,” he said. “He will do some dances and then you forget everything you are thinking about,” he reminisced the talent lost.

There has been no police statement on his death. Since Wednesday, public officials, chiefs, opinion leaders and police chiefs have huddled over meetings upon meetings.

The Eastern Regional Minister, Eric Kwakye Darfuor, addressed one on Thursday, where he made the quip, “if you can’t pay the bills, cut the power off.”

But he would say little about Thomas after JoyNews regional correspondent, Edwin Kofi Siaw approached him for a comment.

There has been an Eastern Regional Security Council meeting where PDS has been given the nod to go ahead with more disconnection exercises but with a human face.

There is another meeting as the Energy Minister and officials of the Public Utilities Regulatory Commission, head to the area for more talks about the protracted problem.

But the blood of Thomas Partey is becoming water under the bridge.

Loading...
Tags
The Odumase bill that has led to a kill

22 prostitutes, 75 others arrested at Odawna railway