Hundreds of thousands of people trapped near fierce fighting in Myanmar’s far west may know nothing of Covid-19 thanks to a yearlong internet shutdown, according to rights groups.

Last June, the Myanmar government, led by State Counselor Aung San Suu Kyi, cut internet access to nine townships in the area due to concerns that it was being used to inflame clashes between the Myanmar military and insurgents.

One township its service restored in May, but eight others, with a total population of about 800,000 people, remain in an information blackout.

Human Rights Watch and Amnesty International say the extended shutdown is putting lives at risk, not only because it’s preventing people from reporting possible human rights abuses — but because it has cut them off from public health campaigns about the coronavirus pandemic.

“With the armed conflict between the Myanmar military and Arakan Army in Rakhine State amid a pandemic, it’s critical for civilians to get the information needed to stay safe,” Linda Lakhdhir, Asia legal adviser at Human Rights Watch said in a statement. 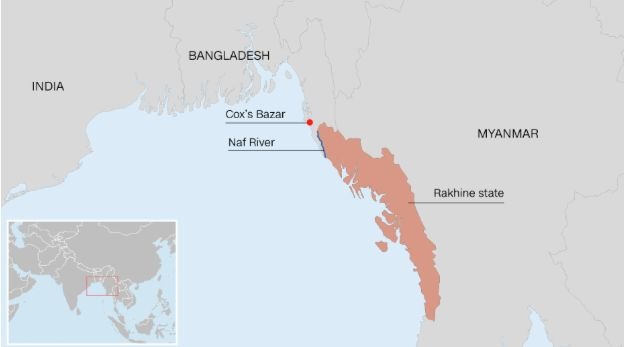 As of Monday, Myanmar had recorded six deaths and 292 positive cases from over 64,532 tests, according to Myanmar’s Ministry of Health.

A handful of cases have been found in the Maungdaw and Buthidaung Townships in northern Rakhine state, where more than 100,000 Rohingya Muslims live in crowded camps.

Many have fled “clearance operations,” launched by the military against Rohingya insurgents in 2018. The UN has called for the Myanmar military to face an international tribunal on charges of genocide for atrocities carried out by Rohingya Muslims.

Rakhine Buddhists made homeless by more recent fighting are also living in camps in the area.

As the coronavirus pandemic spread around the world earlier this year, Suu Kyi’s government launched a “No Person Left Behind” information campaign on disease prevention, such as social distancing requirements.

But MP Htoot May, who represents the Arakan National League for Democracy in the Upper House of Myanmar’s Union Parliament, said on Sunday that many people who live in northern Rakhine state and neighboring Chin state aren’t receiving the public health notices circulated on Facebook, messaging apps and government websites.

“When I ask people in my constituency whether they are aware of Covid-19, I have to explain the global pandemic to them from the beginning,” said Hoot May. “I have to explain to them what social distancing is and how to practice proper hand hygiene.”

“I can’t travel widely because of Covid-19, obviously, so there are only so many people I can warn,” the MP continued.

“They’re not afraid of Covid-19 because they don’t know about it, at this stage they’re far more concerned about the fighting.”

Fighting broke out in late 2018 between the Myanmar military, known as the Tatmadaw, and the well-equipped Arakan Army, which wants greater autonomy for Rakhine Buddhists, the majority of the population in Rakhine state.

As the war rages, the internet shutdown has resulted in more civilian deaths by denying people real-time information, according to an open letter published by a coalition of Rakhine political and community groups to social media on Sunday.

Clashes have increased regardless of the internet blackout, while 151 civilians have been killed and 344 injured in the crossfire between January and May, according to the letter.

“This is not a conflict that can be won by either side on the battlefield,” said independent Myanmar analyst Richard Horsey in a statement to The International Crisis Group. “It’s essentially a political problem where the Rakhine people want more autonomy and more say over their future. (Myanmar) needs to develop a political response and that is currently lacking.”

The alternative is an ongoing war, Horsey says, and both the Arakan Army and Myanmar military have been accused of atrocities. Khine Kyaw Moe, an MP representing the Rakhine National Party, says that with no internet connection, those atrocities are going unreported and undocumented.

“Both armies may be committing human rights violations and, without the internet, people are cut off from the journalists and from the local and international NGOs that they might report these things to,” Khine Kyaw Moe said.

Sunday’s open letter, addressed to Suu Kyi and signed by the 79 Rakhine stakeholder groups, says it is looking for that political solution, which would begin with the government reconnecting the internet.

“Freedom of speech and access to information is the foundation of democracy. In this age, access to the internet is the democratic standard. Equality demands ready information on economics, education, health, and society,” the letter reads.

Like many other nations, Myanmar introduced curfews, bans on large gatherings, and a period of quarantine for foreign arrivals in an attempt to control the spread of the coronavirus.

The government also introduced criminal penalties for people who didn’t comply with the rules, including prison sentences for those who broke quarantine orders. At least 500 people, including children, have been sentenced to jail terms as long as one year.

The country’s response seems to have stemmed the spread of the virus but hasn’t been without its critics.

“Throwing hundreds behind bars in crowded, unhygienic prisons defeats the purpose of containing the spread of Covid-19,” said Phil Robertson from Human Rights Watch in a statement in May.

Suu Kyi’s approach to the pandemic could work against her as the country prepares to vote in an election later this year.

MP Htoot May said the fighting in Rakhine and the subsequent communications shutdown could also erode voter support for Suu Kyi and her party, the National League for Democracy.

“In 2015 I believed in Suu Kyi and I was happy to work with her,” said MP Htoot May. “I would have thought that Aung San Suu Kyi was going to help people in remote areas to gain internet access, not cut them off from it.”

“Human rights aren’t something that Aung San Suu Kyi can just talk about. She needs to practice it.”

On the other hand, Suu Kyi’s record on the virus could have no bearing on her election result — as due to the internet shutdown, large numbers of people in the far west of the country might not even know it happened.

MzGee drops bombshell; This is why she left Multimedia

Election petition: Here are 5 issues the Supreme Court has set out for determination to begin trial