It was a more “Black Stars” worthy performance as Ghana beat Qatar 5-1 at the back of a disappointing performance against Mali.

After five changes made to the team, CK Akonnor reverted back to a more familiar 4-2-3-1 / 4-4-2 setup. With Partey back in a deeper midfield role, Andre Ayew up-top alongside Jordan Ayew with Samuel Owusu and Tariq Fosu playing as inverted wingers.

The team slightly adjusted the 2-2 shape in build-up used against Mali for a 2-3 shape against Qatar. In the build-up, it was common to see one of the two deep midfielders (Baba and Partey) drop deep to collect the ball with the fullbacks stretching the pitch. 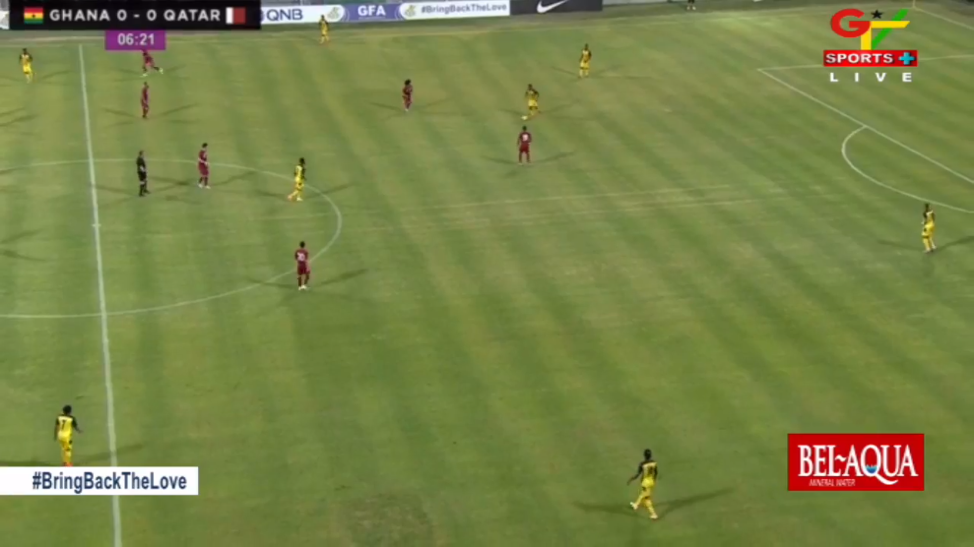 Playing out from the back involved a lot of combination play down the flanks, with the common pattern being ‘Winger-Fullback-CM’ passing combination to get into the final 3rd.

When the build-up was stagnant, one of the wide players or Dede Ayew would drop deep to cause an overload against Qatar’s press (2 strikers + 3 midfielders).

The team would often attack with the fullbacks high and wide, with the wingers tucking on either side of Jordan and Andre. This offered passing lanes between the lines for the Ayews, Samuel Owusu, and Tariq Fosu; 4 attackers who had the ability to receive the ball with their back to goal or in behind the defense. 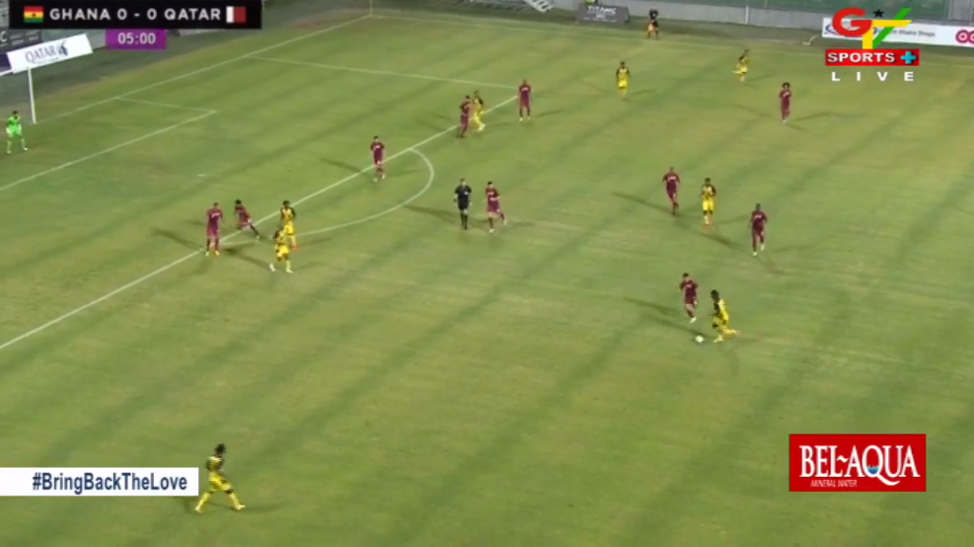 Most of the time, the shape would look like a 2-3-5 shape with Andre/Jordan/Tariq/Owusu dropping deep into midfield to progress the attack.

The involvement of the attacking foursome is something CK Akonnor is very used to since his days at AshGold and Kotoko and throughout the match, some of the combination play among the front 4 was delightful to watch and created many openings and chances in the game.

Very exciting and open game especially in the 2nd half, i counted 25 shots. It might have been more, GTV stream went off for about 10+ mins (sadly)

With the change of system from the Mali game, came a change of defensive shape: the 4-4-2 block offered more solidity at the back. With both the fullback and winger given less complex instructions on how to defend the flank, Ghana found it easier to prevent attacks from wide. 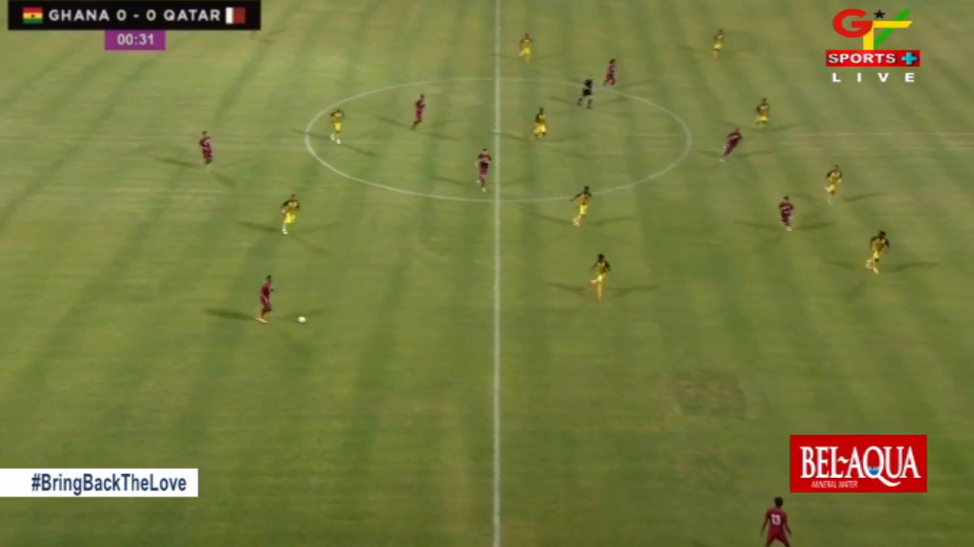 The 3-5-2 normally offers advantages against the 4-4-2 (2v3 in midfield and 2v2 in attack) but the movement and rotation of the Black Stars in the 4-4-2 block often negated Qatar’s attacks to hopeful long balls.

The work rate of the midfield ensured that the problems of the Mali game did not creep in.

When pressing in a 4-4-2 shape against a back 3, the two strikers need to move quickly and intelligently in order to avoid the wide center backs from breaking through the press with one easy pass. This happened a few times in the game when Jordan and Andre dropped off, it encouraged long balls in behind the defence and one chance caused a goal.

Similar to the game against Mali, Ghana pressed in a 4-4-2 shape, with the intent of the press to force a pass to the fullbacks or force a mistake to win the ball in midfield. But after conceding a goal, CK tweaked the shape to better press the 3 center backs, with Thomas Partey often pushing up to join Andre and Jordan to press 3v3 as seen in the image below. The wingers would tuck in fully aware of the positioning of Qatar’s wingbacks in order to press them when they receive a pass.

Counter-pressingvs Qatar was very good too, it helped the Black Stars control the game-high up the field, and re-start attacks to sustain pressure on the opponent.

A Counter-press means that the team immediately after losing the ball tries to press against the ball to prevent an oppositional counter and – instead of transition into the ordinary defensive organization, whatever it maybe – being able to immediately get into possession again.

Baba Iddrisu especially was very active when recovering the ball during the counter-press, Joseph Aidoo also did his part with his very aggressive positioning to intercept any balls behind the midfield.

From the first game against Mali, we could already see what kind of team CK Akonnor is trying to build. The game against Qatar was a massive improvement across all departments. An attack-minded team is one Ghanaians love to see, and I personally look forward to more games under CK Akonnor, this kind of ‘rebuild’ deserves time and patience.

Kwadwo Hemeng is a football enthusiast who analyses tactics and has an interest in stats and data analytics. You can follow him on Twitter @Kwadwo_Hemeng

Woyome begs Supreme Court; this is why

Just In: Another Sika Gari Mallams Busted By Police, See The Fake Monies They’ve Been Using To Deceive People (VIDEO)