According to him, the police and government should focus on arresting corrupt people in the country rather than going after ‘wee’ smokers.

He reiterated that not a single individual has been arrested and jailed for corruption in recent times.

“Stop arresting wee smokers!!!! Too many young people have wasted their lives in jail just because they were caught in possession of the leaf of a plant. This is 2021 and all human beings convicted of wee smoking must be released immediately. Corruption is more dangerous than wee smoking. However, not a single person has been jailed in this country for corruption.

“What sense dose it make for a policeman to meet two people, one smoking weed and the other smoking cigarette, but arrest the wee smoker while the cigarette smokers is allowed to walk free.

“The wee smokers they say will go mad and eventually die. The cigarette smokers will also die of smoking-related diseases.

“In fact, the dangers of cigarette smoking is even boldly written on the pack. So what is the point? Wee death is no different from cigarette death?“ Release all persons convicted of wee smoking now!!! This nonsense must stop immediately! Immediately!!!” 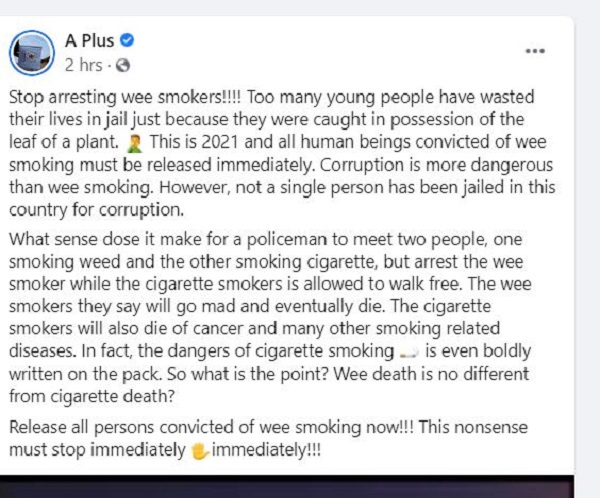 HOT VIDEO: Koku Anyidoho's wife speaks about how she was sacked, baggage thrown out of matrimonial home