Afro-dancehall artiste Stonebwoy is on the verge of suing Kelvynboy for alleging that he was the brain behind the confrontation that happened in Ashaiman on June 22, 2020.

Kelvynboy, a former signee to Stonebwoy’s record label, was yesterday, at the mercy of an attack that was launched on him at the new Electroland Ghana Limited office.

According to reports, the leader of the attackers was once a personal bodyguard to Stonebwoy which gave the clue that the BHIM Nation President may be behind this unprofessional display of hostility.

Following that, Kelvynboy took to social media especially Twitter to vent his anger and to seek the sympathy of the public in a subtle way to paint Stonebwoy black and to eventually accuse him of sending thugs to attack him.

On the back of the foregoing, Stonebwoy and his lawyers have issued a statement and described the allegations outlined by Kelvynboy as an “imputations of criminal conduct” and “very scandalous, and calculated to cause disaffection for Stonebwoy, our organisation, and our brand.”

Refuting the essence of the allegations, the statement added: “we have instructed our lawyers to take the appropriate steps to vindicate the legal rights of Stonebwoy and the brand of our organisation.

“To suggest that we will divert our attention from our efforts to promote Ghanaian music to devote time and/or energy to an artist who was voluntarily released from our organisation can only be the product of an exaggerated sense of self-importance.”

The relationship between Stonebwoty and Kelvynboy has been on a descendency since 2019 after the latter left the former’s record label.

Accusations and counter-accusations have plagued their relationship and thrown the once-vibrant cool vibe into the gutters.

Check Out Statement Below: 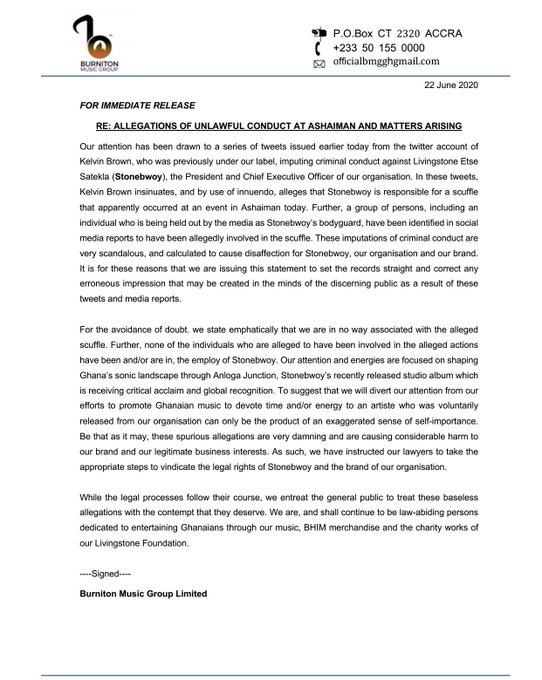