Multiple award-winning dancehall artiste, Livingstone Etse Satekla, well known in music circus as Stonebwoy is suspected to have terminated his deal with samsung.

Stonebwoy, on April 15th, was reported to have signed a juicy deal with Samsung Mobile Ghana Limited.

A delightful Stonebwoy decided to share it with his fans on social media. “Deal Sealed,Action Time. Let The Works Begin. @stonebwoyb X @samsungghana #BhimNationXSamsungMobile,” he captioned under the video.

Well, it’s been less than 4 months and it seems the deal has been terminated between both parties.

Ghanaians started asking questions when the dancehall artiste was exposed on Twitter using iPhone instead of his usual samsung phone.

Also for a while now, our own observations reveal the dancehall artiste has stopped using the hashtag – #SamsungMobile – in his tweets and posts on social as he used to.

We at Gossips24.com cannot say for sure whether the contract between Stonebwoy and Samsung has been terminated, but whatever it is we will be here to keep you posted.

In the mean time, check out the tweet that exposed the dancehall artiste 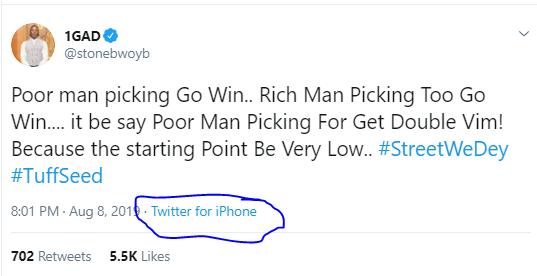 Video: I will drag Kennedy Agyapong to the supreme court if he fails to apologize – Kweku Baako spits fire!!

Don’t relax, prepare for your exams despite coronavirus – Minister to students

3 new COVID-19 symptoms added to official list; Check them out