As part of its election’s coverage, theghanareport.com brings you an analysis of 10 constituencies where the winner was decided by less than 500 votes in 2016.

Relying on the data, theghanareport.com’s political desk looks into their chances in the 2020 parliamentary elections which is some 27 days away.

In the previous data-centred analysis, theghanareport.com highlighted four constituencies in which less than 50 votes decided the winner.

Today, this has been expanded to less than 500 votes deciders.

It was just 157 votes that handed him victory against an experienced NPP MP, Jabaah John Bennam.

John Bennam had won the seat in 2008, got re-elected in 2012. But his attempt to clinch a third-term was stopped by NDC politician, Alhassan Umar, who is now the incumbent.

A little story about NPP’s John Bennam who was kicked out by the incumbent. His votes had been shrinking since he first won it in 2008 by 6,600.

Only four years later, the man this lead all but vanished as the NPP politician won by only  987 votes. His defeat appeared to be on the wall. In 2016, he lost to the NDC by a 157 vote difference.

But Bennam is coming back again to face the incumbent, Alhassan Umar. The two will renew their rivalries in 2020. The NDC would take solace in the fact that they have won the seat four times against the NPP’s two victories.

These two victories came through Bennam. And this man has been contesting that seat since 1996. It’s game on.

When NPP candidate for Zebilla, Frank Fuseini Adongo, won the seat in 2016, he did something really big. He kicked out the Majority leader of Parliament, the NDC’s Cletus Avoka.

A staggering five wins, two losses. And his last loss was by only 200 votes. And so by now the incumbent, Frank Adongo, could be dreading his chances when he comes against the old lion of Zebilla in the 2020 re-match.

But voter fatigue could see advocates for Avoka’s return disappointed. Voters appear to favour younger candidates and a fresh impetus for parliament. In 2016, 123 MPs were novices.

If you want to know why there was violence in Dormaa West during the new voter’s registration in August, you may have to check the data on the 2016 parliamentary elections.

And so with the two set to renew their rivalries in the 2020 parliamentary elections, tension there is high as seen during the registration exercise which resulted in a fatality.

The NDC candidate Asamoah had won the seat in 2012 with almost 1,900 votes difference. This difference was not emphatic enough as Maiga wrestled the seat from him in 2016. But his winning margin is hardly comfortable.

The two will meet again on December 7.

In 2016, the NDC came close to losing the Amenfi Central to the NPP, winning the seat by a narrow margin of 275 ballots.

It is the second time the party had a close shave with a defeat in a constituency it had consistently won since 1992.

But in 2016, Mr. Kwakye Ackah was chosen to represent the NDC. And it is his winning margin that is now under threat in 2020.

He will face Ampongteng in 2020 for the second time. Will the incumbent protect his seat? Or will the NPP win that seat for the first time?

The NDC’s Emmanuel Nii Okai Laryea is the incumbent. He is a two-term MP who is not seeking a third consecutive term in parliament.

Nii Laryea bows out in the 2020 race for Sedem Kweku Afenyo who is now representing the NDC. He will face Akwasi Owusu Afrifa of the NPP.

But there is in-fighting within the NPP camp. An aspirant in the NPP primaries feels disgruntled after he was disqualified. Rockson Aduboahen withdrew his case from court after the party had urged him to come for talks. But soon after he did, the primaries were organised without addressing his disqualification. He has gone back to court and the saga is yet to be resolved.

But Boar was re-elected narrowly by 284 votes.

He first snatched the seat in 2012 from the NDC’s Duut Emmanuel Kwame with 680 winning margin.

Bunkpurugu could be described as a swing constituency as it has elected six MPs in the last 24 years—the NDC has won thrice, NPP twice and an independent candidate, Joseph Yaani Labik, formerly of NDC, winning it in 2004 after he had once won it for the NDC in 1996.

The MP for Lower Manya, Ebenezer Okletey Terlabi, has squandered an 8,000 victory margin he secured in 2012.

In 2016 when he contested Samuel Nuertey Ayertey, he won by only 387 votes in a constituency that has always voted NDC.

In 2020, he is going again in his second clash with Terlarbi who was a deputy Interior Minister under the Mahama administration.

The NPP candidate would fancy his chances especially as his government is in power. But theghanareport.com sources in the constituency say the party is not as united as it was in 2016, questioning their candidate’s human relations.

The NPP won the seat in 2016 to restore the constituency to NPP factory settings. The party had lost that seat in 2012 to NDC’s Georgina Nkrumah Aboah.

But with Anthony Effah, the NPP recovered the seat by only 430 votes.

In truth, the NPP has been losing ground in that constituency since 2008. Corruption campaigner, P.C Appiah-Ofori, after rocking the party, won by only 471 votes.

The NPP took the seat back in 2016. But it heads into the 2020 race without the incumbent MP, Anthony Effah, representing the party after losing the primaries.

He has been replaced by Emmanuel Adjei Domson who would now face the NDC candidate, Alhassan Kobina Ghansah, who contested in 2016 and lost.

Theghanareport.com sources within the constituency say the NPP could easily win the seat because of the One District, One Factory policy in adjourning constituencies that is benefiting the youth of AOB

For a big name in the NDC, Dr. Rashid Pelpuo would not be impressed with his victory margin in the Wa Central constituency. He won by 425 votes in 2016.

The former Youth and Sports Minister entered Parliament in 2004 with almost 9,000 votes margin. But over the years, like butter close to heat, the margin has melted away. This is despite the NDC having a firm grip on the 28-year on the constituency.

One of the few constituencies in which the Peoples National Convention (PNC) has a strong showing, the incumbent tossed aside Bernard Mornah the immediate past Chairman of the PNC thrice – 2004, 2008, and 2012.

The NPP’s imminent threat to the NDC came in 2012 and 2016 when it crossed the 20,000 votes for the first time with Tahiru Issahaku Moomin in both elections. In 1996, the NDC won the seat with a 14,000 margin but it was slashed to half in 2000. In those two elections, Clement Eledi N. Lugri was the NPP candidate while Seidu Mumuni of the NDC won the seat.
Dr Pelpuo will meet the NPP’s Hajia Humi Awudu of the NPP in a contest that will be the biggest referendum on the four-term MP’s tenure.

The NPP candidate is a young inexperienced woman going against an experienced MP whose brother is a royal. But after 16 years in parliament, could Rashid Pelpuo suffer from voter fatigue?

He would need more than  his strategy deployed in 2016 that helped him win by just 430 votes, defeating the NPP’s Eugene Sackey.

But it may not be a difficult task. The last time the NDC won narrowly in 2004 by just 189 votes, it emerged stronger in the following elections in 2008 to widen the victory gap by almost 2,900 votes.

So when Mr. Bekoe meets his contender, the NPP’s Fredrick Obeng Adom on December 7, he will have history on his side

The seat is more NDC than NPP.

But the Eastern R 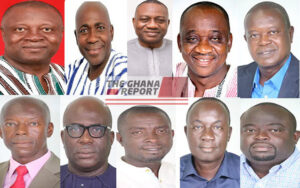 egion is an NPP stronghold and with an NPP government, the party would fancy it can snatch the seat from the NDC.

The government has been paving its road to victory with road constructions. The NPP candidate was reportedly moving around the constituency taking personal credit for the roads being constructed. It irked the NDC MP who came to explain it is a government project, albeit NPP.