Former Finance Minister, Seth Terkper, ahead of this year’s mid-year budget review, has advised the current Finance Minister, Ken Ofori-Atta to reconcile the country’s fiscal data with that of the International Monetary Fund (IMF).

According to Mr. Terkper, reconciliation is necessary as it will maintain the government’s fiscal credibility in the eyes of the international community.

The advice follows the much-publicized inconsistencies in fiscal data presented to Parliament in March 2020 by the Finance Minister and that of the IMF, particularly in the area of the budget deficit and public debt.

The Finance Minister, presenting the revised 2020 budget and fiscal gaps created by the Covid-19 pandemic to Parliament in March, said the fiscal deficit and public sector debt were 4.7 percent and 58.0 percent of GDP, but IMF’ Rapid Credit Facility (RCF) contradicted government’s computation, stating that fiscal deficit and public debt were actually 9.5 percent and 68.7 percent respectively. 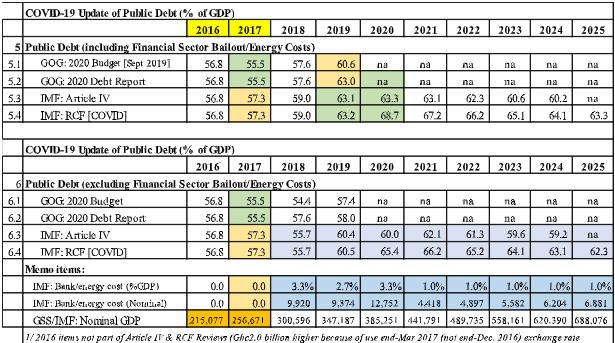 Mr Terkper, speaking further, argued that Ghana, just like the rest of its African counterparts as well as the Western world, practices the all-inclusive approach of fiscal reporting and that this government’s decision to do otherwise by excluding exceptional expenses and arrears (bank bailouts and energy sector arrears) is not acceptable.

“Ghana practices the all-inclusive approach of fiscal data reporting, and that’s the same approach IMF uses. Exceptional costs and arrears are always included in the computation of macroeconomic data, this is the first time it’s being excluded,” he said in a media interaction on Friday.

Sharing his expectations on the mid-year budget review, Mr. Terkper noted that he expects the Finance Minister to effect the necessary corrections needed in its fiscal data.

Mr. Ofori-Atta, in accordance with Section 28 of the Public Financial Management Act, 2016 (Act 921), is scheduled to present the mid-year budget review on Thursday, July 23, 2020.

The Minister is expected to touch on key economic indicators such as growth rate, primary balance, budget deficit, revenue, and expenditure targets among others.

He is also expected to provide to Parliament a clear cut plan on how the government intends to pay back GH¢10 billion it borrowed from the Central Bank to finance the budget deficit as well as the $ 1 billion IMF RCF loan and $ 219 million drawdowns from the Stabilisation Fund and to help deal with the adverse impacts of the Covid-19 pandemic.