As nations around the world attempt to dig their way out of a cataclysmic global recession, Britain is in a particularly tight spot of its own making. The country is in the middle of an economic disaster and a health crisis.

The Bank of England has predicted that the United Kingdom is heading for its worst economic crash in more than 300 years, while its death toll from Covid-19 is the highest in Europe.

Yet the United Kingdom is also racing toward a self-imposed deadline to construct a post-Brexit trade agreement with the European Union, its single biggest market for exports, by the end of the year.

Talks are not going well — raising the possibility of another major shock just as the expected economic recovery gains momentum.

“The whole of the advanced world is in a recession because of the coronavirus,” said Kallum Pickering, senior economist at Berenberg Bank. “But the UK has an additional problem of the UK-EU negotiations in the second half of the year.” 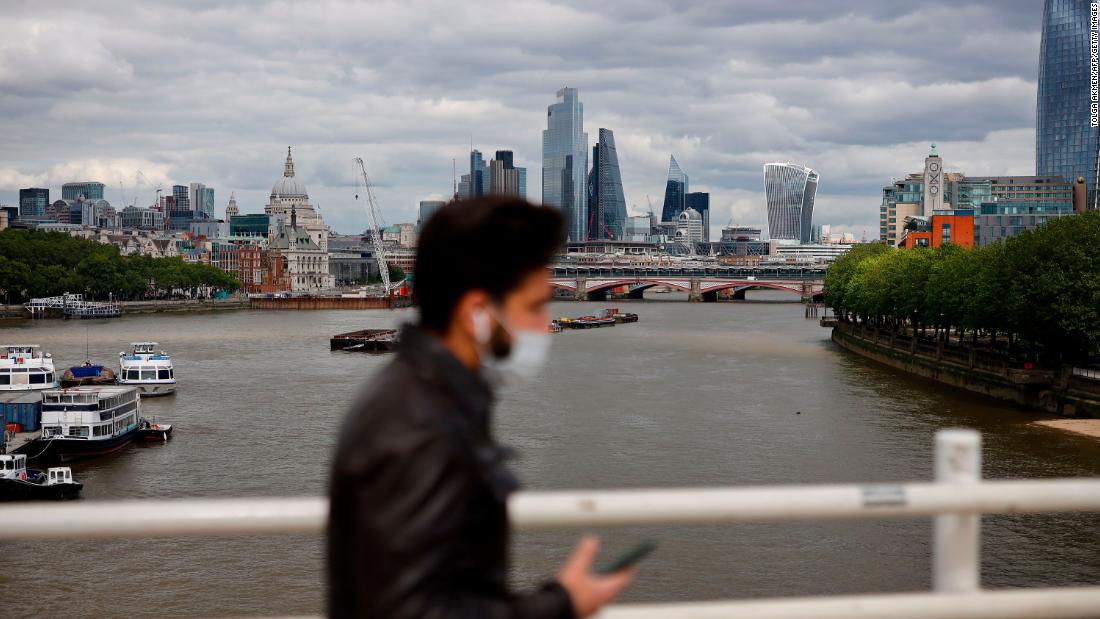 Even without considering the implications of Brexit, the UK economy is in dire straits.

The Bank of England said earlier this month that the economy could shrink by 14% this year.

That would be the biggest annual contraction since a decline of 15% in 1706, based on the bank’s best estimate of historical data. GDP could fall by 25% in the three months to the end of June.

Data released by the UK government in recent days has been harrowing. Claims for unemployment benefits soared by 69% to almost 2.1 million last month.

Inflation in April, meanwhile, declined for its third consecutive month to 0.8%, raising concerns that prices could be entering a damaging downward spiral.

Restaurants and non-essential shops remain closed, and economists aren’t confident that activity will pick up right away once they reopen. 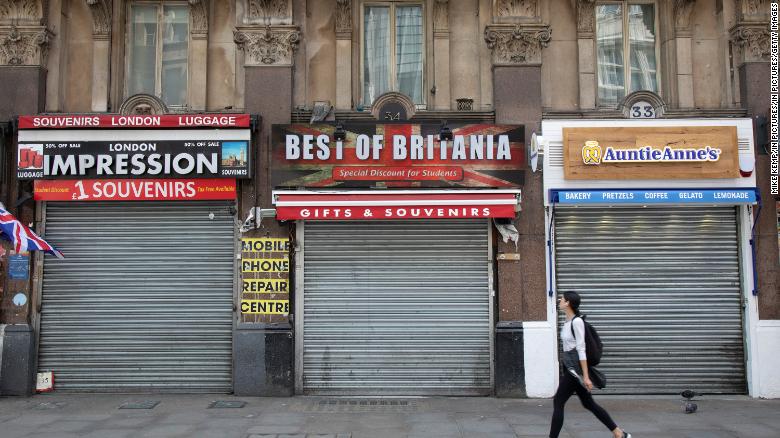 Shutters are down at closed tourist shops in London on May 12.

The grim mood was reflected Wednesday when the UK government sold its first bond ever with a negative yield.

This indicated demand was so high that investors were essentially willing to pay the British government to lend it money.

Gilts, as they’re known, are considered a safe-haven asset, alongside the US, Japanese and German government bonds; elevated demand signals that investors are worried economic growth will remain depressed.

“The markets are reflecting the economic reality, which is that the economy has collapsed,” said Robert Wood, chief UK economist at Bank of America.

The British pound has dropped more than 8% since the start of the year to less than $1.22 and has also fallen more than 5% against the euro. The FTSE 100 (UKX) index in London has lost more than 21% year-to-date, compared to nearly 9% for the S&P 500, while the FTSE 250 index of midsize British companies is down more than 26%.

Attempting to stem the vast economic damage, the UK government borrowed £62.1 billion ($75.7 billion) in April, the highest level since records began in 1993.

The government now projects it will need to borrow £298.4 billion ($363.3 billion) through March 2021, almost twice as much as at the height of the global financial crisis.

And Bank of England Governor Andrew Bailey even hinted this week that official interest rates — currently 0.1% — could go negative for the first time in British history.

His comments have encouraged speculation that the bank could opt for negative rates in 2021, should the economy need another shot in the arm then.

“What the Bank of England has done is remove the floor on policy rates, so you can’t assume they will definitely not cut” below zero, Wood said. “That said, clearly negative rates are one of the last resorts here.”

The risk they may be needed is rising because UK Prime Minister Boris Johnson has committed to nailing down the terms of the UK’s new relationship with the European Union by the end of 2020, following its exit from the bloc in January.

Failure to reach an agreement could subject UK companies to steep new tariffs, threaten their supply chains and make their products and services more expensive at the worst possible moment.

The United Kingdom has until June 30 to ask for an extension to the deadline, but the Johnson government has consistently said it does not want to do this.

Talks are not going well, however. Michel Barnier, the EU’s chief Brexit negotiator, said last week that he was “not optimistic” about reaching a deal with the United Kingdom, adding that the EU will step up preparations for the year to end without new terms of trade in place.

The UK’s chief Brexit negotiator, David Frost, said in a letter to Barnier on Tuesday that the EU was offering up “a relatively low-quality trade agreement.”

Worsening your trade terms with the destination for nearly half your exports will be an economic negative.”

Without a deal, industries that have already been hit hard by the pandemic would be battered even more.

David Henig, a former trade negotiator and director of the UK Trade Policy Project at the European Centre for International Political Economy, said on Twitter Thursday that a 10% tariff on cars shipped to the European Union would kick in if an agreement isn’t reached, threatening at least £15 billion ($18.3 billion) in exports.

Pickering of Berenberg Bank is concerned that the running clock on Brexit talks could create problems for the United Kingdom in the second half of the year when economic growth is meant to be picking back up.

Household spending, which makes up around 70% of GDP in the UK, will determine the trajectory of the UK’s recovery, he said.

As the lockdown ends, the worry is that Britons will keep saving their money due to anxiety about their jobs or a second wave of infections, limiting the impact of government and central bank relief efforts. Uncertainty tied to Brexit will only encourage that excessive saving, according to Pickering.

UK car sales fall 97% in the worst month since 1946Even if the United Kingdom does reach a new trade agreement with the European Union, it won’t be as favourable as the old regime.

Johnson is pushing for a deal that would allow the United Kingdom to also strike an agreement with trading partners such as the United States. In the draft proposal released by the UK government this week, Britain reaffirmed that it does not want to be part of the EU single market, and is instead seeking a deal in line with what the bloc has in place with Canada or Japan.

“Worsening your trade terms with the destination for nearly half your exports will be an economic negative,” Bank of America’s Wood said. “[It’s] another reason to expect the recovery from this crisis to be a very elongated U [shape], and not a V.

“Irish Prime Minister Leo Varadkar echoed this view on Thursday.”Brexit will further complicate matters,” Varadkar said. “As I said a few months ago, Brexit’s not over. It’s only halftime.”

2020 Is Your Retirement Year – Audit Service Board Tells Domelevo