New twist pops up as the alleged son of late former president, Jerry John Rawlings from Israel who was spotted walking with Kimathi Rawlings happens to be his friend from India and not his sibling.

On January 28, 2021, a lookalike man who was spotted at the funeral rite held at Accra International Conference Centre of late Jerry John Rawlings was rumored to be his son.

Many social media users and online news outlets quickly mistook him as the son of former President Rawlings since he appeared in the public domain in the company of Kimathi Rawlings.

The young man who bears striking resemblance to his father landed from Israel and was received by his brother Kimathi who escorted him to the Accra conference centre where the funeral took place.

At the moment, very little is known of this young lookalike friend of Kimathi Rawlings who was alleged to be the son of late Rawlings from Israel who popped up at the funeral rite of the former president.

A new twist which has set indicates that the supposed son from Israel is a friend of Kimathi from India.

The young man widely reported to be former President Jerry John Rawlings’ son from Israel is an Indian.

According a friend, Edzordzi Kofi Dzikunu, who has shared a photo of the supposed son of Rawlings, the young man is only a good friend to Kimathi and not a sibling as being speculated.

Edzordzi Kofi Dzikunu sharing the picture of himself, Kimathi Rawlings and their Indian friend wrote:

He’s not an Israeli nor His Son ….. He is Kimathi’s Very Good friend from India …. Eiii Ghana and “konkonsa” you go believe and even add more to make it sweeter. 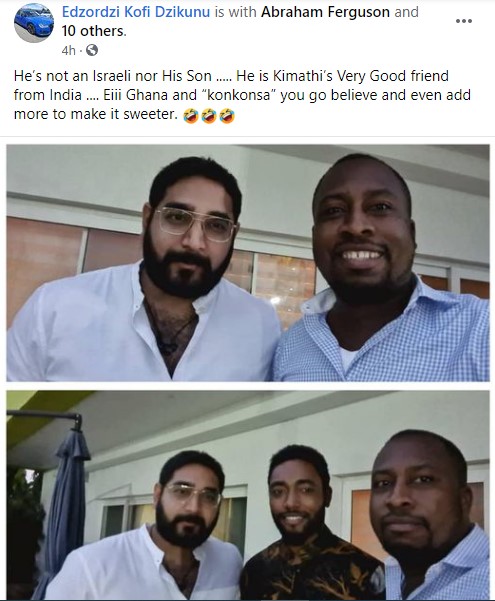