The Vice President in a statement on Friday March 12 denied knowledge of any Ramatu indicating that Samira Bawumia has been his only wife who he has been married to for seventeen years.

The statement said although his religion allows for him to take four wives, he has been with Samira all these seventeen years and is not interested in taking another wife.

But reacting to the statement in a post shared on his Facebook page, Dzifa Gunu indicated that the Vice President is denying something he knows is true just because Samira Bawumia has asked him to.

He indicated that the Vice President will be hot in the coming coming days because there will be several revelations.

“There’s a statement purported to be coming from the office of Bawumia, it seems Samira is fighting Bawumia to deny something he knows is true. Unfortunately Bawumia is gonna be hot in the coming days.”

The conversation about Ramatu came up after the Speaker of Parliament mentioning dignitaries present at the inauguration of Nana Addo Dankwa Akufo-Addo as President for the second term.

The name also featured prominently when the President of Ghana delivered the State of the Nation Address. 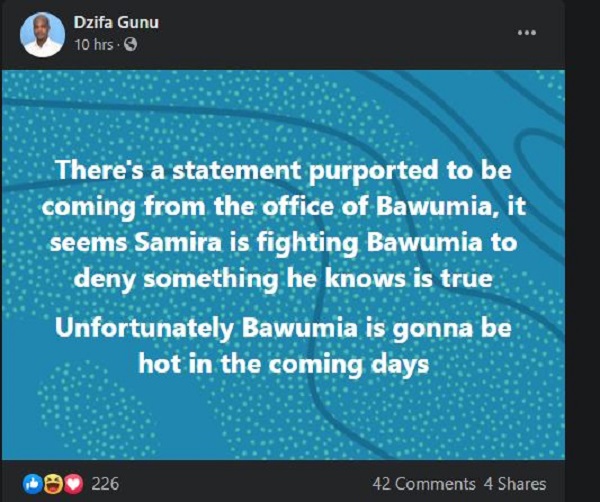