The National Democratic Congress (NDC) and some other opposition political parties recently held a demonstration in Tamale, Northern Region against the Electoral Commissions decision to compile a new voters’ register.

In an address at the 71st New Year School and Conference today (January 14) in Accra, President Akufo-Addo said today there are peaceful demonstrations taking place in Tamale.

Reacting to this at the opening of the New Year school in Legon, Accra, President Akufo-Addo said: “ . . let me state a Ghanaian irony. Five years ago, we had demonstrations in Accra calling for a new, credible register, in which some citizens were maimed and brutalized. Indeed, a citizen, young Justice Adzakuma, lost his eye, and died last year. May God bless his soul. Today, we are having peaceful demonstrations in Tamale, this time protesting against the decision of the Electoral Commission, whose constitutional remit it is to compile an electoral register, to have now a new, improved register. Fortunately, in this new era, there are no casualties. God bless Ghana”.

The 71st Annual New Year School, which will start from Tuesday January 14 to Friday, 17, is on the theme: ‘Ghana Beyond Aid: Prospects and Challenges’.

While the opening ceremony of the three-day event will be held at the Great Hall of the University of Ghana, the rest of the programme will continue on subsequent days at the Cedi Conference Centre of the same university. 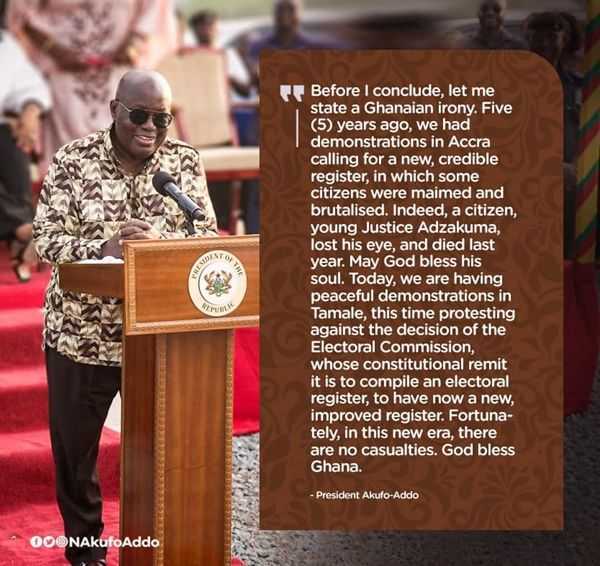