President Trump and his Democratic rival Joe Biden have faced off in their second and final presidential debate of the election campaign.

They traded arguments and accusations on everything from the coronavirus pandemic to the economy and even the “caging” of children of migrants crossing the border from Mexico. Reality Check has unpicked some of the claims.

Trump: “We’ve rounded the corner [on coronavirus] – it’s going away”

Verdict: Coronavirus is not going away – cases and hospital admissions are rising and deaths remain high.

The White House’s top infectious disease expert, Dr. Anthony Fauci, has disputed the president’s assertion that the US is turning a corner, calling the latest statistics “disturbing”.

Around 60,000 new coronavirus cases a day are being reported across the US, up from around 50,000 a day at the start of October, according to the Covid Tracking Project.

Hospital admissions have also increased by more than 30% since the start of October.

Confirmed deaths have remained at around 800 a day through October. 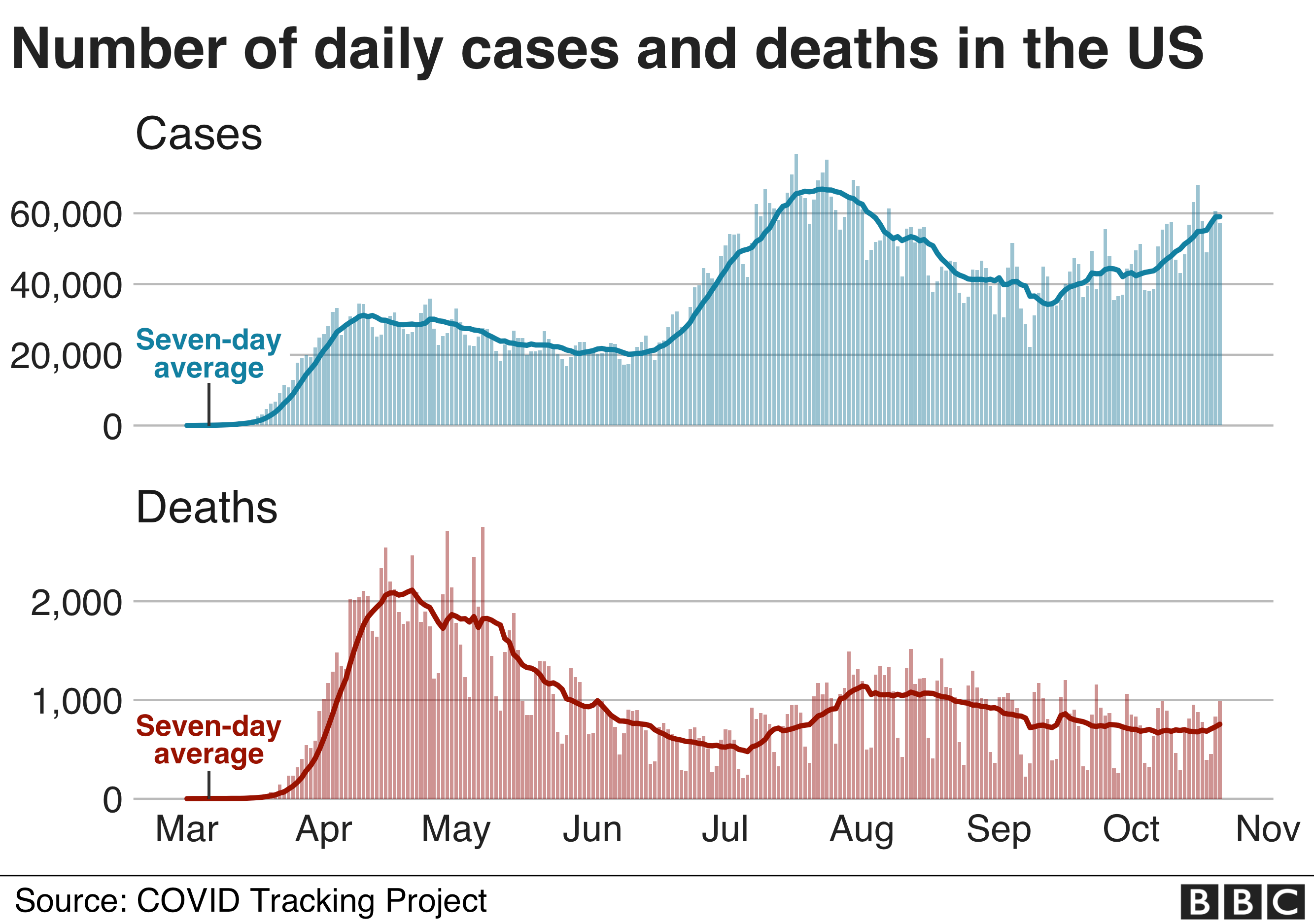 Biden: “The coronavirus spikes are in red states”

Verdict: That’s not right. Coronavirus cases are rising in both Republican (red) and Democratic (blue) states.

The Democratic presidential candidate Joe Biden implied that the rise in infections was centered on Republican-run states.

Covid-19 cases are rising in more than 40 US states and these include both Republican and Democratic-controlled states.

North Dakota, South Dakota, Montana, and Wisconsin have seen the most coronavirus cases per capita over the last week, according to the New York Times.

The Dakotas are run by Republican governors, but Montana and Wisconsin both have Democratic governors – although all of these states voted for President Trump in 2016.

Mr. Biden also pointed to spikes in Republican states in the Midwest – but the midwestern state of Illinois, which voted for Hillary Clinton in 2016 and has a Democratic governor, is also experiencing a spike in coronavirus cases. 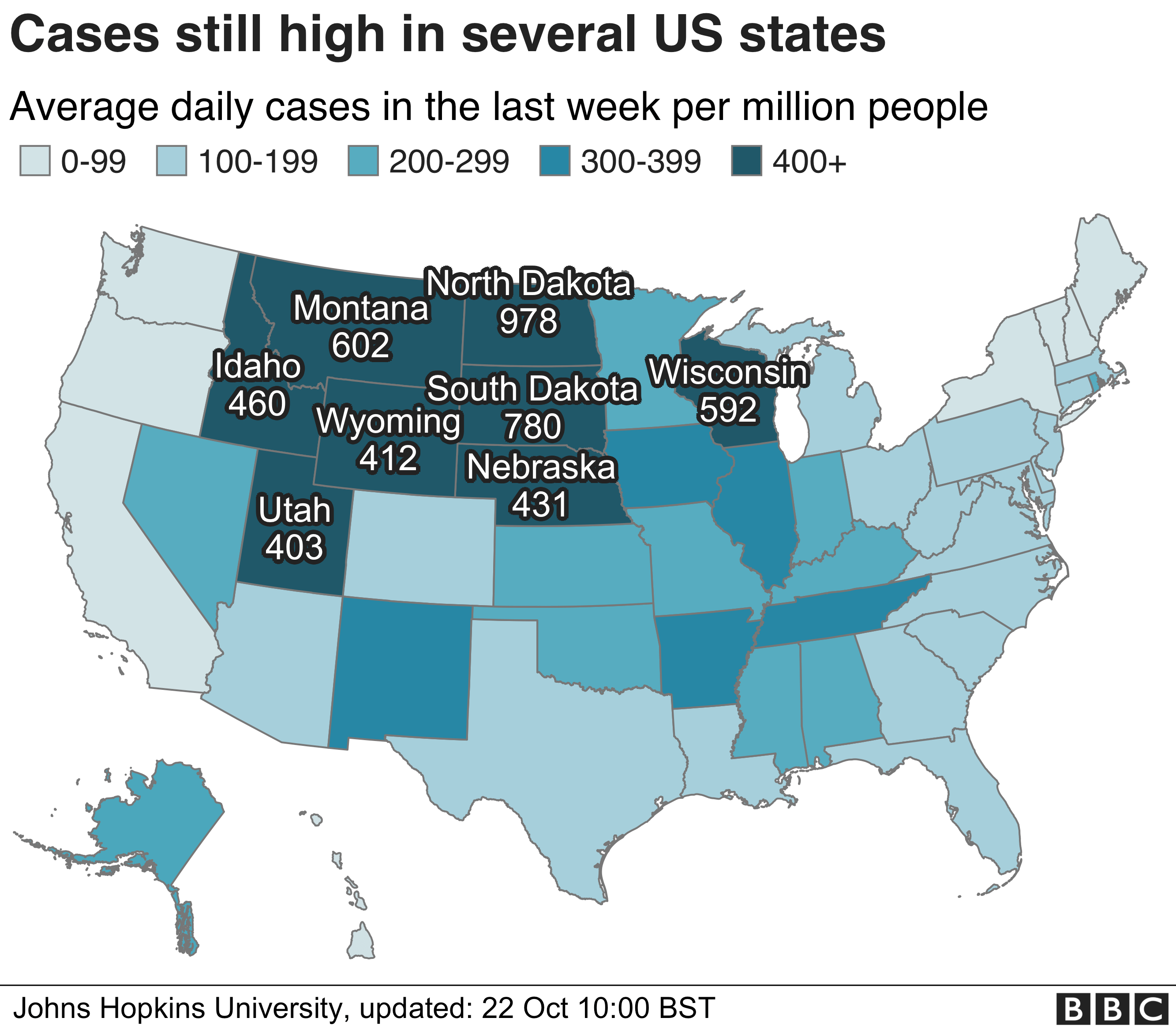 Trump: “2.2 million people, modelled out, were expected to die”

Verdict: This is misleading.

The figure is mentioned in a study published by Imperial College London in March in the case of an “unmitigated epidemic”.

But the study describes 2.2 million deaths from Covid-19 in the US, not as the “expected” number, but instead what would occur “in the (unlikely) absence of any control measures or spontaneous changes in individual behavior”. 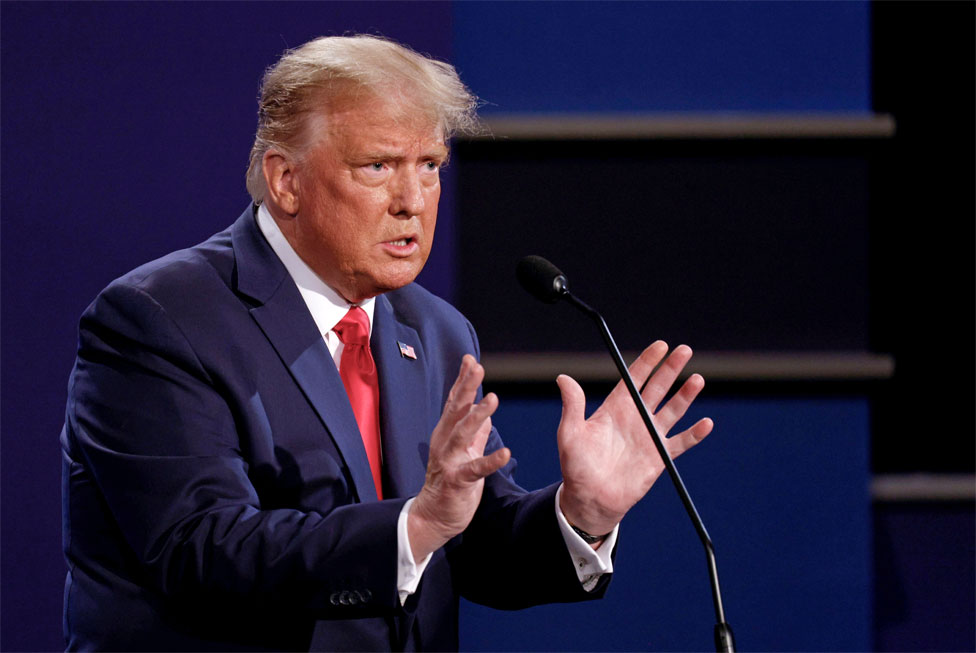 Trump: “I have a plan to help people with pre-existing conditions”

Verdict: President Trump may have a plan to do this but he hasn’t shared it with the American people.

The Affordable Care Act (ACA), passed under President Obama, made it illegal to deny healthcare coverage to people with pre-existing medical conditions.

The Trump administration wants to repeal it and now seeks to dismantle the law in the Supreme Court.

The president has repeatedly said he would replace the act with something better and protect people with pre-existing conditions, but his plan to do this is yet to be published.

In September, President Trump signed an executive order which said: “access to health insurance despite underlying health conditions should be maintained”.

But there is no detail about how this will be done or funded.

Biden: “We commuted over 1,000 people’s sentences…the federal prison system was reduced by 38,000 people under our administration”

Verdict: He’s right about the number of commutations during the Obama administration, but not about the federal prison reduction.

About 1,700 inmates had their sentence commuted (or changed to a less severe one) by President Obama and a further 212 received a pardon. 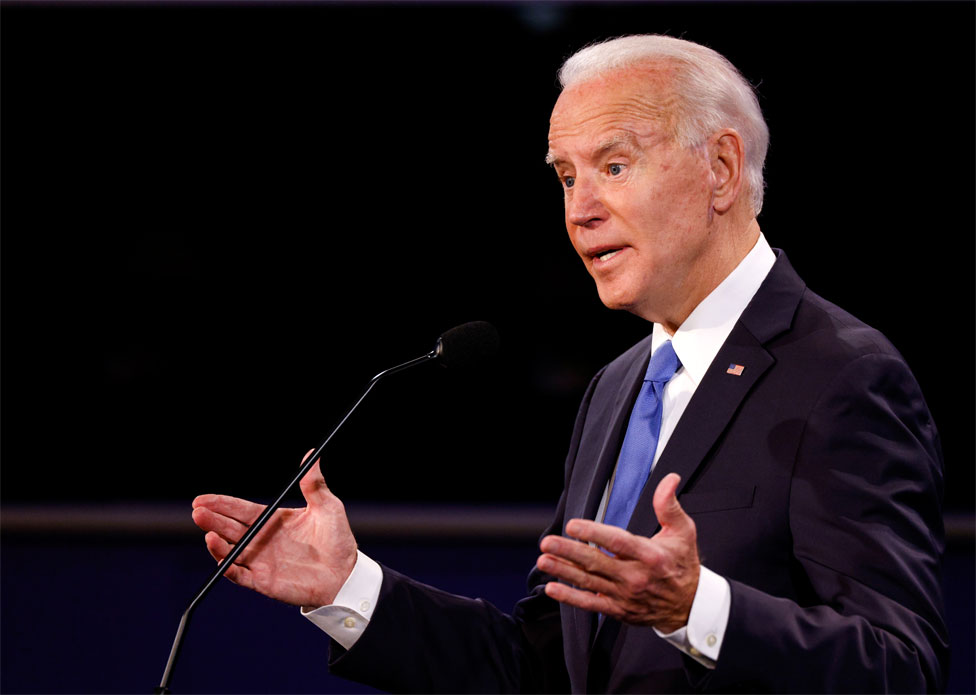 Trump: “I’ve got the Nato countries to put up an extra $130 billion going to $420 billion a year, that’s to guard against Russia”
Verdict: This implies these figures are annual increases – that’s not correct.

Since 2016, European countries and Canada have increased investment in their defence budgets by $130 billion. But this has been over a number of years rather than every year.

Biden: “He [Trump] has caused the deficit with China to go up, not down”

Verdict: That’s not quite right.

After rising in 2017 the trade deficit with China – the gap between imports and exports – fell sharply after 2018, following tariffs imposed by Washington on Chinese goods. 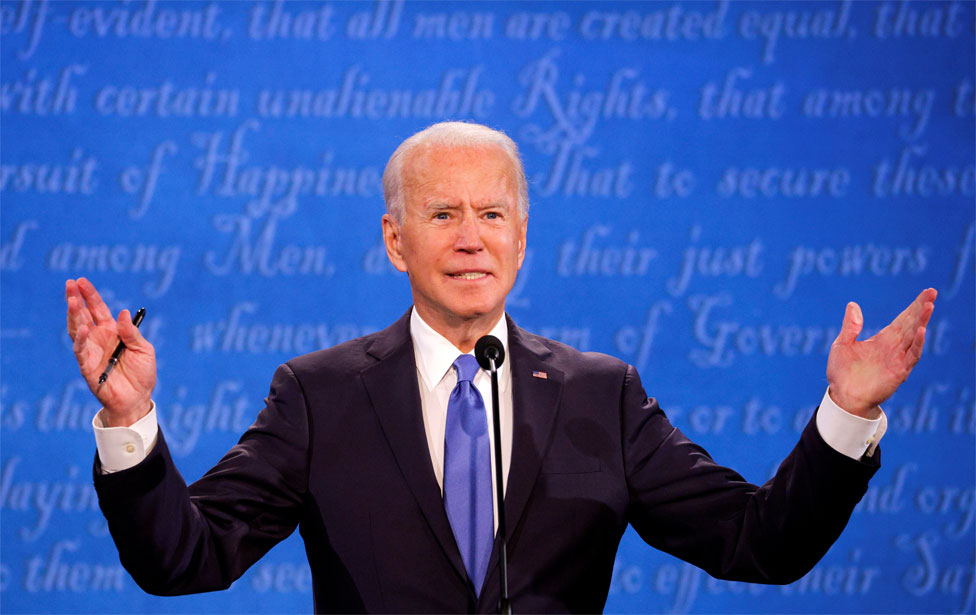 Trump: “They did it, we changed the policy…They built the cages”

Verdict: This needs context. It’s true that some migrant children were detained in sites with chain fences under President Obama, but the law said they couldn’t be held for more than 72 hours.

There were heated exchanges over the controversial policy of the Trump administration that led to the separation of children from their parents at the US border.

Mr. Trump said it was the Obama administration that built “the cages” used to hold them.

When Barack Obama and Joe Biden were in office, facilities with chain link fencing were built to house the high numbers of unaccompanied children who crossed into the US from Mexico, before they were transferred elsewhere.

Jeh Johnson, the head of Homeland Security during the Obama administration referenced this issue in 2019: “Very clearly, chain link, barriers, partitions, fences, cages, whatever you want to call them, were not invented on January 20, 2017, OK.” (This is the date of President Trump’s inauguration).

But he said their detention was meant to be temporary, noting that under the Trafficking Victims Protection Reauthorization Act, children could only be held in those facilities for 72 hours before being transferred to the health authorities. 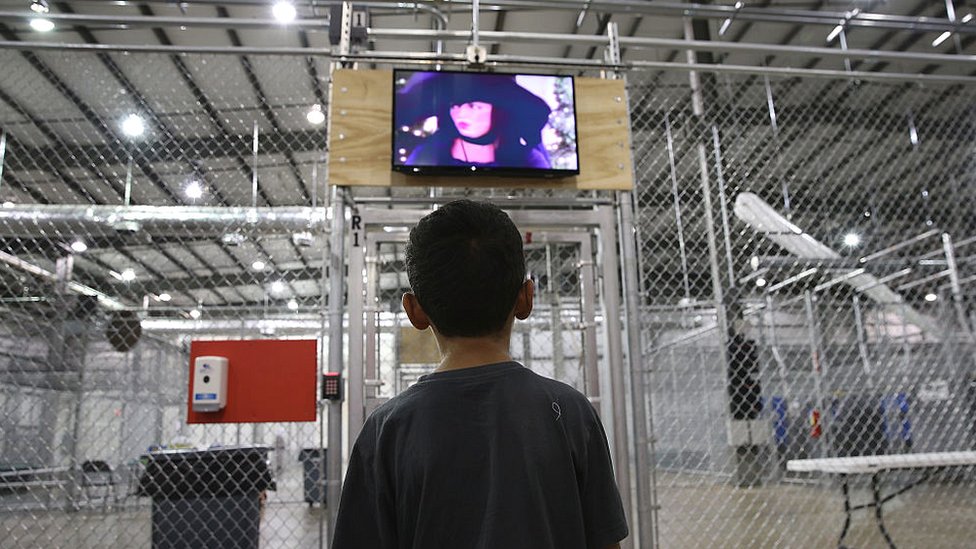 Verdict: He is right about clean air but not about water.

The Environmental Protection Agency (EPA) says the US currently has the cleanest air on record.

Over the past few decades, air quality – a measure of six major pollutants – has improved significantly in the US.

On the water, however, the US is ranked 26th in the world on sanitation and drinking water, according to Yale University.

On this ranking, Finland, Iceland, the Netherlands, Norway, Switzerland, and the UK have the cleanest water. 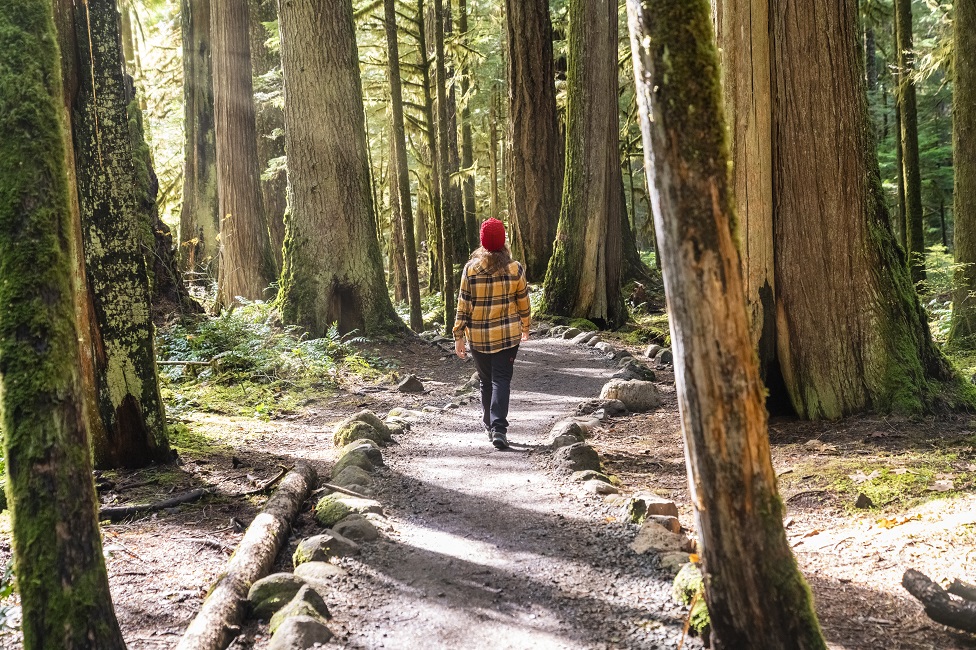 US election 2020: How Trump has changed the world