The death of George Floyd has sparked outrage and protest but some white teens have created a challenge in which they mock his death.

Floyd died on Memorial Day after now-former Minneapolis officer Derek Chauvin placed a knee on his neck for 8 minutes and 46 seconds. He’s since been charged with second-degree murder and the three other former officers involved have been charged as well. The country has been beset with nationwide protests with marchers from all backgrounds, but some teens on social media have been making fun of the 46-year-old’s final moments. The teens, who are mostly white and male, step on the necks of another person, film it and post it to social media as the “George Floyd challenge.”

“Racists are now doing the George Floyd “challenge.” This is what we’re up against, folks. It’s a privilege to make sarcasm about racism instead of experiencing it your whole life,” 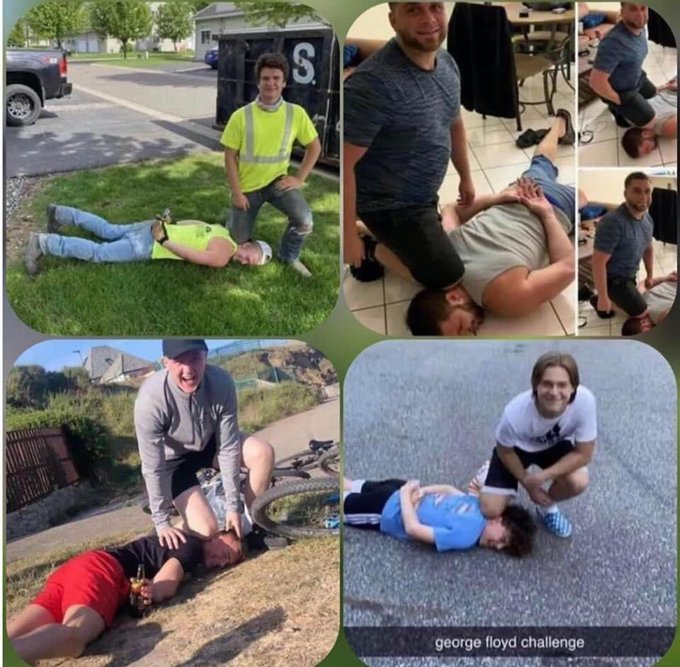 Three teenagers in the U.K. have been arrested on suspicion of sending communications causing anxiety and distress according to the BBC. They’ve been released on bail.

“We can confirm we are investigating after an image was shared on social media which showed two men imitating the recent death of US citizen George Floyd,” a spokesperson said.

In the United States, the students are dealing with repercussions as it relates to their schooling according to NBC News. Marquette University rescinded the enrollment of an incoming freshman after he made a post that made fun of Floyd’s death and compared it to the protests that took place in the NFL.

“Some ppl think it’s ok to f—— kneel during the national anthem so it’s ok to kneel on someone’s head,” the post read, according to The Sentinel. “come at me. y’all brainwashed.

While most of the images featured males, girls were also active participants in the gruesome challenge. In one clip, a girl has her knee on her neck on another who screams that she can’t breathe, a play on Floyd’s last words. The clip continued with laughter and someone cheering them on off-camera.
The seniors were set to attend the University of Missouri and Missouri State University in the fall. However, they have now withdrawn since their actions went viral.

“Given the similarity to the recent death of George Floyd in Minneapolis, the video is both shocking and disturbing,” wrote Mun Choi, president of the University of Missouri System and interim chancellor of MU, in an email to the campus community.“University leaders and I remain committed to combating discrimination and racism in all its forms,”

Revealed! Slain MP begged robbers to follow him home for money before he was killed