Member of Parliament for Hohoe Constituency, John Peter Amewu has listed promises he has delivered to his constituents in his first month of assuming office.

In the area of education, the first time MP outlines that he has been able to secure scholarships for some 50 students in his constituency and has also distributed laptops to teachers and students in the month of January 2021.

Some youths of Hohoe have been secured jobs in the public sector by the MP as indicated on his list.

The first time MP also indicates that his office is conducting final works on some boreholes drilled and yet to be commissioned in the Hohoe Constituency.

Mr Amewu who served as Energy Minister in the first term of President Nana Addo Danwka Akufo-Addo’s government won the Hohoe seat on the ticket of the New Patriotic Party having contested in the 2020 general elections.

He has been nominated as Minister-designate for Lands and Natural Resources by President Akufo-Addo who is currently constituting a new government for his second term.

See below the list of promises delivered by Mr Amewu in his first one-month : 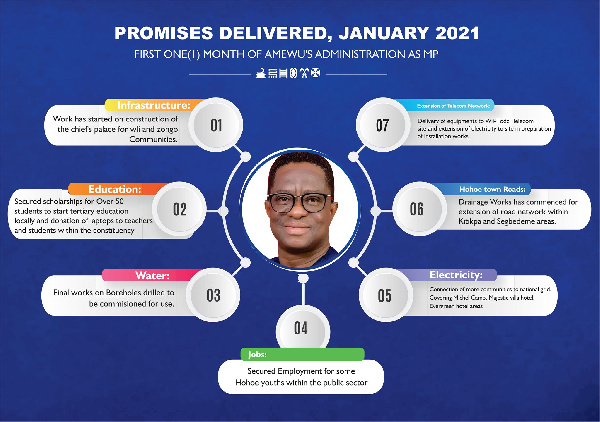 Why ‘trotro’ was exempted from Covid-19 restrictions [Listen]