Daniel Yao Domelevo, the embattled Auditor-General who has been directed to retire compulsorily by President Nana Akufo-Addo, sang the popular hymn ‘Now thank we all our God’ composed by German Lutheran clergyman Martin Rinckart in 1636.

In a post on his Facebook timeline since the letter from the presidency was made public, Domelevo wrote out the song from Methodist Hymn Book (MHB) #10:

“Now thank we all our God,

With hearts and hands and voices,

In whom His earth rejoices;

Who from our mothers’ arms,

Hath blessed us on our way,

With countless gifts of love

And still is ours today.”

A letter signed by Nana Bediatuo Asante, Secretary to the President, on Wednesday, March 3, and addressed to Daniel Yao Domelevo said:

“The attention of the President of the Republic has been drawn to records and documents made available to the Office by the Audit Service, that indicate that your date of birth is 1 June 1960 and that in accordance with article 199(1) of the Constitution, your date of retirement as Auditor General was 1 June 2020.

“Based on this information, the President is of the view that you have formally left office. Mr Johnson Akuamoa-Asiedu will continue to act as Auditor-General until the President appoints a substantive Auditor General.

“The president thanks you for your service to the nation and wishes you the very best in your future endeavours.” 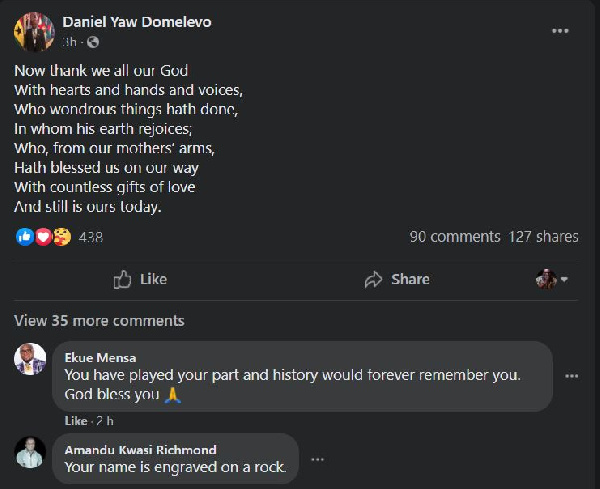 Akufo-Addo is my friend, Mpiani is my in-law – ET Mensah

(PHOTOS): Meet The Beautiful Wives Of 5 Of The Most Famous NPP MPs