Parliament has announced members of the Appointments Committee with both parties represented in the house having 13 slots each.

The last appointment committee had 16 NPP MPs against 10 from the NDC side. The new committee has as chairperson, the first deputy speaker and MP for Bekwai, Joe Osei-Owusu. The vice-chair is Alexander Kwabena Afenyo-Markin.

With no clear majority in the house where both National Democratic Congress, NDC and ruling New Patriotic Party, NPP, have 137 MPs apiece, it took the alignment of independent lawmaker, Fomena MP and second deputy speaker to enable the NPP to be declared the ‘majority group.’

The appointments committee recommends to Parliament for approval or persons nominated by President for appointment as Minister of State, Deputy Minister, Members of Council of State, the Chief Justice and other Justices of the Supreme Court and any other persons specified under the constitution or under any other enactment.

The Business Committee was also constituted with 10 members apiece. That committee is led by leader of the NPP caucus, Osei Kyei-Mensah-Bonsu, with Afenyo Markin as vice-chairperson. 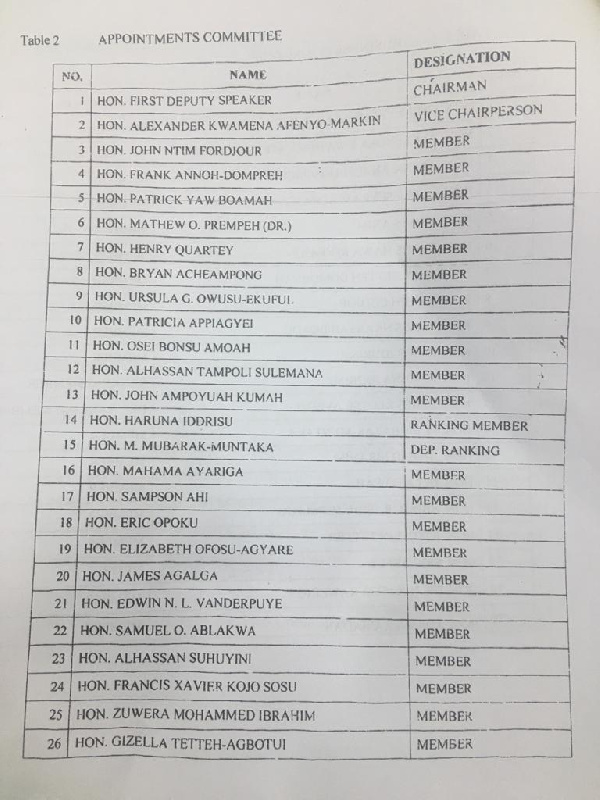