All opposition National Democratic Congress(NDC) Members of Parliament from the Volta Region are set to storm Ketu South constituency on Monday to protest the deployment of heavily armed soldiers to the area.

The Minority in Parliament has accused the government of using soldiers to intimidate residents of the Volta region as the Electoral Commission readies to compile a new voter’s register for the December polls next week.

According to the Minority, the sudden deployment of military personnel to parts of the Volta region is to ensure that the residents feel threatened to come out and register to vote in the elections.

Residents in the Ketu South Municipality which is a major stronghold of the NDC say they are living in fear and panic following the deployment of some heavily armed security personnel into the area.

“There is this erroneous perception that every Voltarian who lives or works in Togo is not a Ghanaian. The truth is that some are dual citizens and they have the legal basis to vote as accepted under our laws,” the Minority Spokesperson on Security James Agalga told Starr News Friday.

In a Facebook post, the Member of Parliament for North Tongu, Samuel Okudzeto Ablakwa said “We have resolved that all MPs from the Volta Caucus in Parliament together with some of our national & regional party leaders shall lead a delegation to Ketu South tomorrow morning.

“We stand in solidarity with the oppressed and we stand in readiness to confront and defeat bigotry.” 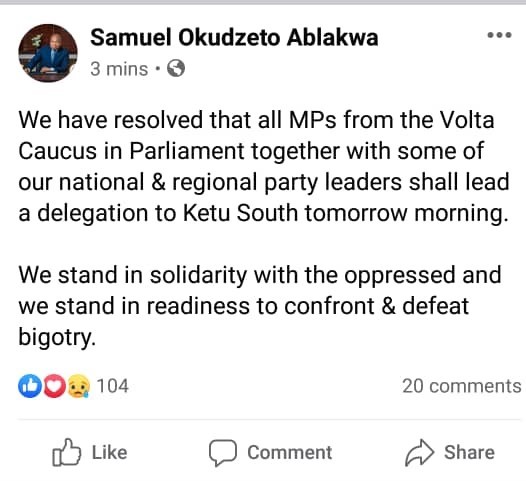 3 new COVID-19 symptoms added to official list; Check them out