There has been pressure on the flag bearer of the opposition National Democratic Congress (NDC), John Mahama, to name his running mate barely six months to the 2020 elections.

Accepting the nomination, Prof. Opoku-Agyemang said her nomination was a recognition of the towering roles women play in the development of the country.

“This historic nomination is not a personal achievement but a victory for inclusive and participatory democracy, which enhances the credentials of our country,” she said in an acceptance statement.

She stressed that her nomination is a victory for Ghana’s democracy.

Read the full statement below: 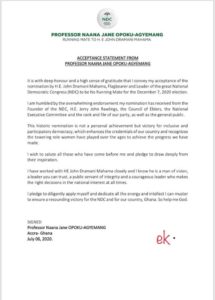 The university don has scored many first already—she is the first Ghanaian woman to be appointed a Vice-Chancellor in 2008.

She would, however, become the third woman to run on the ticket of a political party in Ghana—Cherita Sarpong Kumakuma for the Convention Peoples Party (2012) and Brigitte Dzogbenuku of the Progressive Peoples Party (2016).

Although was born on November 22, 1951, at Cape Coast in the Central Region, she hails from Komenda in the same region.

She was appointed the Minister of Education under the John Mahama administration, a position she held from 2012 to January 7, 2017.

Naana Jane Opoku-Agyemang attended Anglican Girls’ Secondary School at Koforidua and Aburi Presby Girls’ School. She then had her secondary education at the Wesley Girls High School in Cape Coast from 1964 to 1971.

She completed B.Ed.(Hons) in English and French at the University of Cape Coast in 1977 and obtained her Masters and Doctorate degrees from York University in Toronto, Ontario, Canada in 1980 and 1986 respectively.

Professor Opoku-Agyemang taught and worked at the University of Cape Coast, starting in 1986.

She has held various academic positions including Head of the Department of English, Dean of the Faculty of Arts, Warden of Adehye Hall, Valco Trust Fund Post-Graduate Hostel, and Dean of the School of Graduate Studies and Research.

From 1997, she has held the position of Academic Director of the School for International Training in the History and Cultures of the African Diaspora.

In 2018, she broke the jinx of female academics playing supporting roles in administration to become the country’s first female Vice-Chancellor at the University of Cape Coast.

Before then, in March 2007, she was one of five scholars selected to deliver presentations during the 200th Anniversary of the Abolition of Slavery at the United Nations Headquarters in New York City.

In October 2009, she was elected Ghana’s representative to the Executive Board of the United Nations Educational, Scientific and Cultural Organisation (UNESCO).

Ahead of the 2012 general elections, Jane Opoku Agyemang moderated the debate with Kojo Oppong Nkrumah, now the Minister of Information.

When the National Democratic Congress lost the 2016 elections, she returned to academia.

On 26 October 2018, she became the Chancellor of the Women’s University in Africa in Zimbabwe.

She has served on many local and international boards and committees such as the Centre for Democratic Governance, (CDD-Ghana), the Editorial Board of the Harriet Tubman Series on the African Diaspora (Africa World Press Inc. USA), the Africa Initiative in Canada, and the College of Physicians and Surgeons as Eminent Citizen.

Prof. Opoku-Agyeman also chaired the Adjudication Committee, VALCO Literary Awards, Ghana 1993-1998; Board of Governors, Ghana Centre for Democracy and Development (CDD-Ghana) since its founding in 1998; and Board of Governors, Wesley Girls High School 1994-1998.

In recognition of her outstanding contribution to the development and promotion of quality education in Ghana, the Ghana Women of Excellence Award has conferred her.

She was twice honored for outstanding performance in advancing international education by the School for International Training/World Learning, the USA in 2003 and 2007.

Prof. Opoku-Agyeman was honored with honorary degrees from the University of West Indies and Winston Salem University.

She also received an award for Global leadership from the University of South Florida in Tampa.

She researched and published extensively in areas including Literature by women from Africa, Oral Literature in Ghana, and on issues relating to Higher Education in Ghana and Africa as well as on the Trade in Enslaved Africans.

Prof. Opoku-Agyeman attended numerous international conferences in Africa, North America, the Caribbean, and Europe, on many occasions as Keynote Speaker.

She was one of the five eminent scholars invited to address the United Nations General Assembly in New York during the commemoration of the 200th Anniversary of the Abolition of Slavery in March 2006.

Interestingly, all of Prof Opoku-Agyemang’s three children are Ph.D. holders.

Get ready for the fire ahead – NPP tells Naana Opoku-Agyemang