A misunderstanding that erupted at a drinking spot at Sabon Zongo in the Greater Accra has landed one in court and another at the Korle Bu Teaching Hospital.

The misunderstanding resulted in the stabbing of one man in the abdomen and another charged with causing harm.

Narrating how it happened, the prosecutor Chief Inspector Emmanuel Halligah, said on October 18, this year, at about 1:00 am, the first complainant, Richard Nunoo, and his friend Suleimana Alpha went to the said drinking spot.

According to the prosecution, the two friends met another friend who offered to buy them drinks.

The three friends drank to the fullest and decided to leave.

When they were about leaving, Chief Inspector Halligah said “Suleimana Alpha, who happens to be the witness in the case poured a small quantity of the beer in his disposal cup away.”

“One man who was at the spot asked the witness why he did not give the remaining drink to him. In response, the witness stated that what was left was too small.

“The accused person who was also at the scene asked the witness what nonsense he was saying. The witness replied that he was not talking to him as such he should mind his business,” Chief Inspector Halligah told the Accra Circuit court.

This, the prosecution, explained was the genesis of the problem. 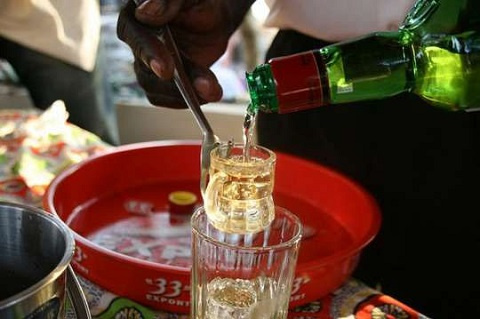 According to the prosecutor, the accused person took offense to the complainant’s remark and attacked the first witness.

“Richard Nunoo in an attempt to separate them pulled the accused backward but to his dismay, the accused stabbed him in the abdomen with a jackknife.

“He cried out for help and was immediately rushed to the Korle Bu Teaching Hospital for treatment. He also cut the second complainant on the arm with an unknown object,” he narrated.

The 31-year-old Salifu Awudu was subsequently arrested by members of the community and brought to the police station.

He was further remanded by the Accra Circuit Court. He was accused of causing harm — a charge he has pleaded not guilty to.