President Akufo-Addo has expressed immense satisfaction at his choice of replacement of Finance Minister Ken Ofori Atta following the latter’s unavailability to present the 2021 Budget statement to the floor of Parliament.

Taking to his social media platform, Facebook, the president was full of praise toward the Majority Leader and Minister for Parliamentary Affairs, Osei Kyei-Mensah-Bonsu for his seamless delivery of the budget.

“Osei Kyei-Mensah Bonsu read the Budget as if he does it every year!” he wrote in reaction to a post by his vice, Mahamudu Bawumia after he posted comments about the budget presentation.

The 2021 budget, titled the “WON YA WO HIEE BUDGET!” was on the theme, “Economic Revitalisation through Completion, Consolidation & Continuity”.

The over three-hour-long budget spoke largely on the effects of the coronavirus on the economy, with the government seeking Parliament’s approval to expend GHs113billion against the GHs105billion that was expended in 2020.

Prior to President Akufo-Addo’s choice of the caretaker Finance Minister, reports were rife about the selection of Vice President Bawumia as well as Trades Minister Alan Kwadwo Kyerematen to present the budget statement.

But about 48 hours to the D-day, the president settled on the veteran Member of Parliament for Suame to mount the platform and present the budget statement for his second term in government. 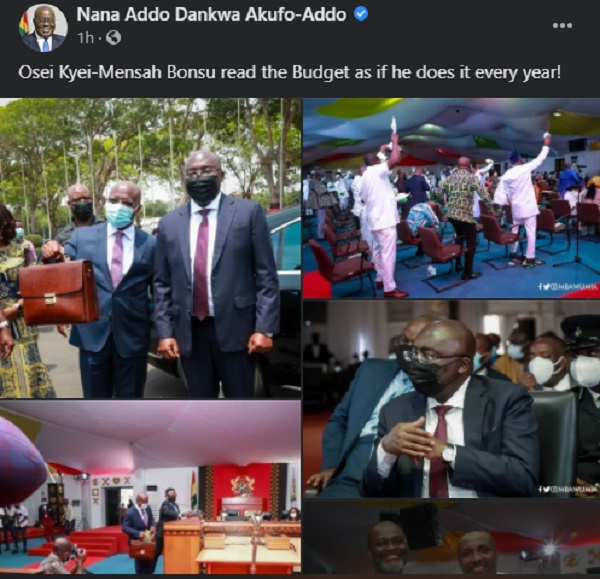