He fumed with rage and threatened to walk out of the studio over a question he was asked about his estranged wife but rescinded his decision after the host apologized. Koku Anyidoho now salutes Nana Aba Anamoah for her conduct during their encounter on Starr Chat, Wednesday.

Sharing a photograph he took with the popular broadcaster on his social media handle, Mr. Anyidoho said: “Nana Aba, you reminded me yesterday that I did not tweet congratulating women on International Women’s Day. Nana Aba, salute you for being a woman of strength. Yesterday, your inner strength was at play, I respect you deeply. You have won my extra admiration my dear.”

What happened on the show?

On her maiden edition of the Starr Chat show, March 10, 2021, a smooth conversation nearly ended abruptly when Nana Aba Anamoah asked Koku Anyidoho if a message was sent from his end to his estranged wife on International Women’s Day.

This was after Mr. Anyidoho had said he wished some female friends he could reach a happy Women’s Day.

“I will walk out of the studio, don’t annoy me. If you want me to disturb you, I will go. If you want to see the other side of me, you will see it. I don’t take no hostages…” he fumed while trying to make his way out.

“You can sit down; I apologise for that”, said Nana Aba Anamoah, an apology which was well received by Mr. Anyidoho as he sat for the interview.

Jennifer Abena Boahemaa, wife of Mr. Anyidoho told GhanaWeb she had been sacked from their matrimonial home and also accused her of being the cause of the death of their daughter, Sitsofe, who died in an accident. 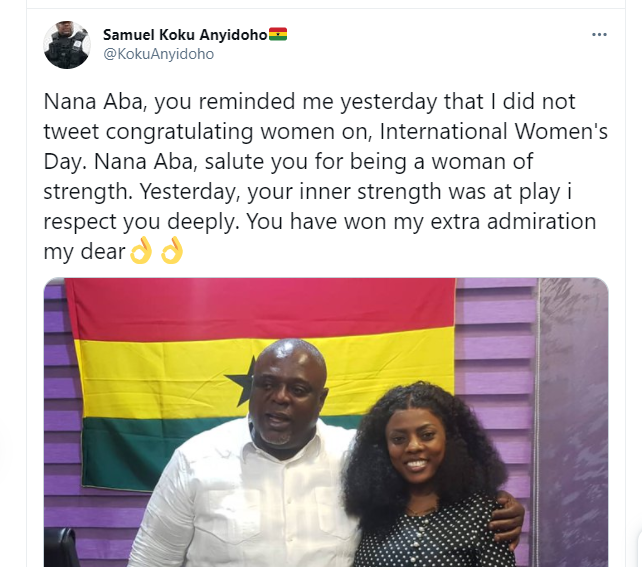