Former Vice President Joe Biden has secured the delegates needed to win the Democratic Party’s presidential nomination on the first ballot at the August convention, crossing the threshold of 1,991 delegates.

Associated Press reported that Biden who took a commanding delegate lead in mid-March and after Vermont’s Senator Bernie Sanders dropped out of the race in early April, confirmed this in a statement released on Friday night.

Folks, tonight we secured the 1,991 delegates needed to win the Democratic nomination. I’m going to spend every day fighting to earn your vote so that, together, we can win the battle for the soul of this nation.

It was an honour to compete alongside one of the most talented groups of candidates the Democratic party has ever fielded and I am proud to say that we are going into this general election a united party. 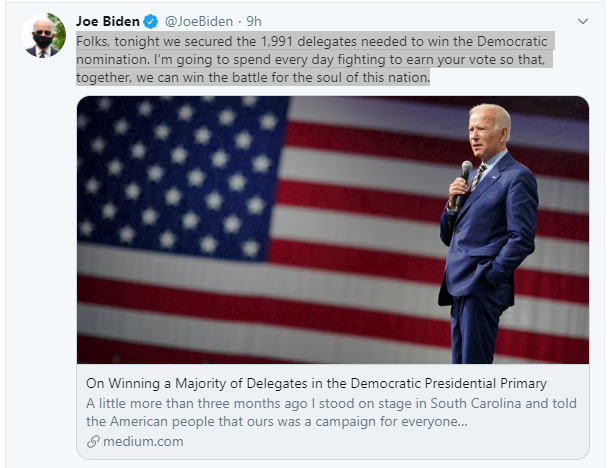 The 78-year-old who served as Delaware’s Senator for decades before becoming United States vice president during Barack Obama’s administration, will be taking a shot at the presidency for the third time.

Obama had endorsed Biden in April, saying in a video that he had “all the qualities we need in a president right now”. President Trump on the other hand has disclosed that he is eager to take the fight to Mr Biden who he derides as “Sleepy Joe”.

The milestone comes as the nation faces compounding crises wrought by the Coronavirus pandemic, soaring unemployment and a wave of protests over racism and police brutality. Biden enters the November 2020 general election in a strong position, with polling showing him ahead in a number of key battleground states.

Mario Balotelli ‘sacked' by his club Brescia, this is why