The Member of Parliament for Tamale Central, Alhaji Inusah Fuseini is expected to report at the Headquarters of the Criminal Investigations Department (CID) later today.

This follows an invitation extended through the Speaker of Parliament to him to assist in investigations over some comments he made in a recent television programme.

The legislator is alleged to have called for the NDC to run its own government, parallel to the Akufo-Addo-led government.

A portion of the police’s letter to the Speaker of Parliament seeking Inusah Fuseini’s release for investigations said the CID is currently investigating the case in which the Member of Parliament is heard saying that he is advocating for John Mahama to form a parallel government.

“The CID is investigating a case in which the Member of Parliament for Tamale central, Alhaji Inusah Fuseini on Pan African Television show made some comments that; “I have said and I have advocated that the National Democratic Congress (NDC) Flagbearer, John Mahama and former President of the Republic of Ghana declares himself President and forms a parallel government,” the letter read,

The letter said Inusah Fuseini is expected at the CID headquarters at 10am.

“It would be appreciated if you could release the aforementioned Member of Parliament to report to Director Operations/CID Headquarters, 2nd floor, Room 2 on 24/12/2020 AT 1000hours to assist in investigations,” the letter further read.

Below is the statement released by the Police 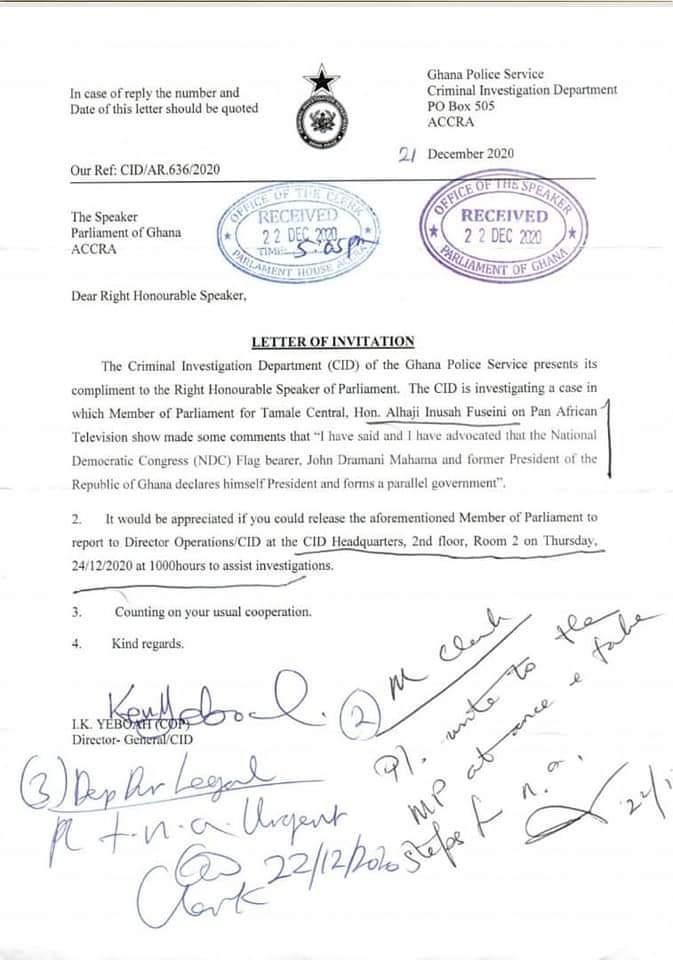 Inusah Fuseini, like other members of the NDC are challenging the results of the just ended elections, insisting that its candidate, John Mahama was denied victory.

The party is yet to indicate its next line of action to register their disquiet and seek redress.

The party has so far staged various demonstrations in different parts of the country over the election results.