Shadrack Osei Boateng, University for Development Studies (UDS) overall 2020 best student narrates his story on how he managed to set record in UDS with a CGPA of 4.94 although coming from a poor background.

Shadrack Osei Boateng, a brilliant young Ghanaian student from the University for Development Studies, graduated as the overall best student at the university.

Osei graduated with a CGPA of 4.94 although he was part of the first batch of engineering students and he happens to be a record setter since the school was set up.

Shadrack Osei Boateng had A+ throughout with a few A’s in his academic records in University for Development Studies (UDS). Sharing his life story, Shadrack Osei Boateng revealed he lived all his life in Kumasi, in the Ashanti Region where he had his primary, junior high and secondary school education.

Shadrack started his basic education from a low class school which he says is not in existence at the moment called Just One World International school at Santasi.

In class two to three, Shadrack narrated that he stopped Just One World International school and attended State Experimental Basic School where he completed his Junior high school education with grade 6 from his Basic Education Certificate Examination results and was expecting to attended his dream school, Opoku Ware but was placed at Kumasi Senior High, his second choice in 2012.

At Kumasi Senior High, Shadrack pursued a General Science course and he was privileged to be the overall best Science student in form 2.

Shadrack revealed that he had a brilliant friend who was his studies partner, Sekyere Michael. Sekyere and Shadrack were the National Science and Maths Quiz contestants for Kumasi Senior High in 2015.

Shadrack graduated Kumasi Senior High with 6As and 2Bs and was not picked initially for the courses he chose in KNUST but later the school called him to come and pursue doctor of pharmacy course however, since there was a delay, he had finished paying his fees in University for Development Studies (UDS) to pursue a Mechanical engineering course. According to Shadrack, he struggled with finances at UDS but old students of Kumasi High funded it and bought him a laptop in addition. 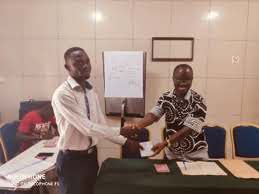 Shadrack revealed his father is a sales attendant and his mother is a petty trader and thanked them for their supports.