A distraught husband has filed a five million Cedis suit against the Ridge Hospital in Accra for alleged medical negligence in the death of his wife and baby at the facility.

In a 5-page writ filed on June 1, 2020, at the Accra High Court, Mr Mohammed Mustapha, the husband of the deceased, Akua Nyarko Osei-Bonsu, alleges that the medical officers failed to appropriately treat and manage his wife’s condition during and after a Caesarean Section (CS).

The suit states that the failures, negligence and careless acts and omissions of the medical officers who performed the surgery at the hospital caused and/or contributed to her death.

The Statement of Claim stated that during the deceased’s routine antenatal care, the medical officers requested for a Doppler Scan. After the scan, the deceased was diagnosed with severe Intrauterine Growth Restriction (IUGR) with an Abnormal Umbilical Artery Doppler, a condition which pointed to placental insufficiency.

Based on the diagnosis, the deceased was scheduled for an emergency (CS) in order to save her life and the baby. Notwithstanding the CS which was conducted on December 16, 2019, the baby did not survive and in less than 24 hours, Mrs Osei-Bonsu developed a condition called thromboembolism which eventually led to her death.

The complaint states that Dr Frederickson Pobee, a medical doctor who led a medical team at the hospital to attend to the wellbeing and healthcare of Mrs Osei-Bonsu failed to administer an important medication after the surgery.

“Although the 4th Defendant’s own protocols or standard practice demands that every patient who undergoes CS, is given a prophylactic anticoagulant therapy (PAT) after 12 hours of the CS, the 4th Defendant did not even include this therapy in the management plan of the deceased.

“The 4th Defendant, in fact, did not administer any prophylactic anticoagulant therapy notwithstanding that it was aware that the deceased was susceptible to pulmonary thromboembolism, by reason of her weight, condition and the surgery,” the complaint said. 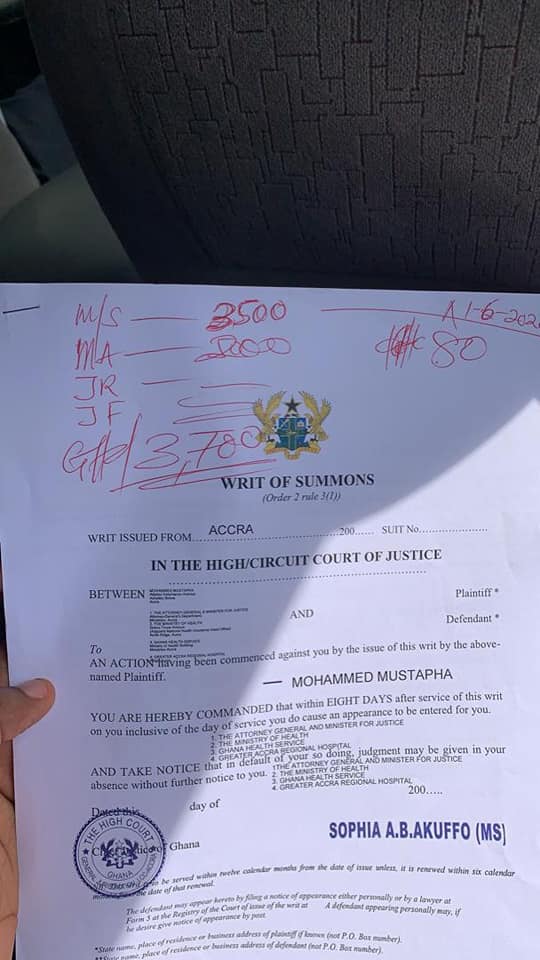 However, a report dated February 26, 2020, on the deceased medical history at the hospital stated that all the protocols and procedures required in administering healthcare to the deceased were followed.

“In summary, the medical team took the right decision to perform the caesarean section even though the baby did not survive on account prematurity and severe IUGR. The development of a thromboembolic phenomenon within 24 hours after the caesarean section was unfortunate. The protocol of the department is to administer prophylactic anticoagulant therapy after 12 hours of caesarean section. Unfortunately, the Husband did not procure the said medication even though it was prescribed before surgery. Even after surgery, the staff impressed upon him to procure the drug but he failed to procure the medication until the unfortunate thromboembolic complication happened. A review of the management processes of the team on duty when the woman experienced the sudden onset of breathlessness showed appropriate steps,” the report said.

Mr Mustapha has since denied thee claims saying it is an attempt by the hospital administration to implicate him, in order to cover up their gross negligence.

“The drug, Fragmin, which could have prevented the situation was bought but was not administered,” Mr Mustapha said.

Since the unfortunate incident, Mr Mustapha has launched several actions demanding justice for his wife.

a. A declaration that the death of the deceased arose from the negligence of the Defendants and/or their agents.

b. A declaration that the manner in which the deceased died breached the strategic objectives of the National Health Policy adopted since 2007 and also Ghana’s commitment to the Sustainable Development Goals on Maternal Health and mortality

c. General damages for negligence assessed at the sum pleaded in paragraph 21 of the statement of claim.

Mr Mustapha is electing for a full trial, according to the lawsuit.

HOT VIDEO: Beenie Man hospitalised after he fainted at his mother’s funeral