The case of Farouk Adams, the Aduana Stars defender involved in the alleged hit and run of a young police officer, has been transferred from the Wamfie Magistrate Court to the Sunyani High Court, according to information available to DGN Online.

This is as a result of the nature of the case which reportedly falls outside the jurisdiction of the Wamfie Magistrate.

Over the weekend, police launched investigations to arrest a suspected hit-and-run driver who reportedly knocked down a policeman on Ashotiano and Asuhyiae stretch in the Dormaa East District of the Bono Region.

The officer, General Constable Amos Maatey Nigaoko, number 56637 of the Wamfie Police Station was said to have asked permission while on duty to buy a mosquito repellent when the incident occurred on March 1, 2021.

On the said day at about 7 pm, Constable Amos who was on snap check duty at Nsesresu with some other policemen called Sergeant Ibrahim Karim when he asked permission to go to town to buy mosquito repellent. 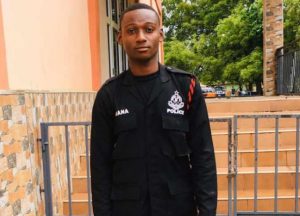 After several minutes of waiting he was not returning when phone calls were made to friends to warn him to return to his duty point but to no avail.

However, the subsequent day March 2, 2021at about 7 am, information reached the police that there was a body lying by the roadside between Asuotiano and Asuhyiae suspected to be an accident victim.

Police proceeded to the scene only to identify the deceased as Constable Amos.

Police got intelligence that the deceased was hit by an unknown vehicle which escaped but was later arrested and detained.