The seven-member panel of the Supreme Court hearing the 2020 presidential election petition, following a lengthy argument by counsels on Friday, ruled to strike out 7 paragraphs in the petitioner’s witness statement.

The statement was that of the General Secretary of the National Democratic Congress, Johnson Asiedu Nketia, who is the first of two witnesses of the petitioner, John Dramani Mahama.

Lawyer Akoto Ampaw, counsel for the second respondent (President Akufo-Addo) was the first to raise objections, asking the court to strike out ten paragraphs in the witness statement. According to him, they were “not based on the pleadings of the petitioner, unduly prejudicial and scandalous”.

He was opposed by the petitioner’s lead counsel, Lawyer Tsatsu Tsikata, who argued that the objections were preposterous.

Consequently, the Supreme Court justices ruled to maintain three out of the ten paragraphs objected to, and ruled to expunge the remaining seven.

Read from the statement of the witness the expunged paragraphs as well as the maintained ones below: 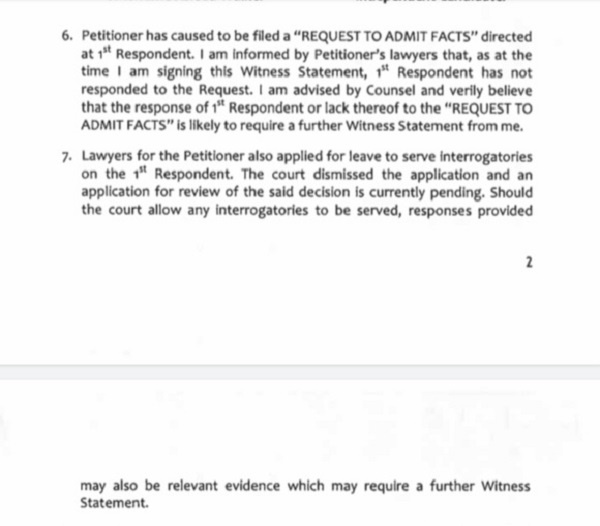 Read Below excerpts of the court’s ruling on the matter:

The 1st and 2nd respondents have raised objections to portions of the witness statements of Mr. John Asiedu Nketia who has been sworn in this court as PW1.

We find paragraph 21 as a matter which has its foundation in the pleadings and same is accordingly maintained.

As regards paragraph 25, we find out that part and that paragraph is hereby struck out as not based on the pleadings.

In respect to paragraph 26, the court is of the opinion that the statement is also struck out on the basis that it has no foundation in the pleadings.

As regards paragraph 28, it is not borne out of the pleadings and same is accordingly struck out.

In respect to paragraph 30, the court is of the view that it has no foundation in the pleadings as it just refers to C.I. 127 which the witness cannot testify on the statutes.

As regards paragraphs 32 and 33, we find that they are based on the pleadings and therefore maintained to be part of the witness statements.

In respect to paragraph 37, we find that it is just an inference to be drawn and not evidence and therefore proceed to struck it out.

The court, therefore, orders that the paragraphs referred to offends the law and are hereby expunged from the witness statement of PW1.