It has emerged that the Government of Ghana is misleading Ghanaians with a high number of figures which is considered as the number of cases tested so far.

President Nana Addo Dankwa Akufo-Addo, on Sunday, April 19, 2020, through his televised broadcast noted that Ghana has so far tested 68,591 people for the Coronavirus.

He explained: “There is, thus, a backlog of some 18,000 tests whose results are yet to be received. The overwhelming majority of these contacts have been established in the last three weeks of the partial lockdown in Accra and Kumasi. Out of this number, 1,042 persons, i.e. 1.5%, have been confirmed as positive, with 67,549, i.e. 98.5%, testing negative; 99 persons have recovered and have been discharged; and 930 persons, who have been isolated, are responding to treatment either in their homes or in treatment facilities.”

Meanwhile, Ghanaians are being told that for patients to be discharged, they need to be tested at least thrice to prove that they are negative before they could be discharged.

Situating this argument with the number of people recovered, namely, 99 patients, it implies that the 68,591 government is claiming to be the number of patients tested so far is false.

Therefore, if the 99 patients who have recovered were tested three times (99 by 3 =297), and add that to the number of tests so far, the total number of tests conducted since the outbreak of the novel Coronavirus in Ghana will not be the 68,591; here it is inflated but in reality, it must be less. This implies that the figures are not a true reflection of the actually less number of people tested.

Prof Agyeman Badu Akosa on Citi TV had raised concerns about the data on the Ghana Health Service website.

According to him, in a situation where 12,000 outstanding tests which results are yet to be received rather saw a sharp increase in numbers to 1042.

“Surprisingly on April 13, 2020, that was the number that had been positive and reported on the Ghana Health Service official website but somehow, that number only came out from the President’s address on Sunday.

“In a sense, I am seeing that the results, probably are coming, but somehow results are being managed in a manner that might look suitable,” he said.

Prof Akosa further stated that even though the health officials were quick to remove the said figure from the official website, the graph on the website indicated that Ghana had attained a 1042 case count before the televised announcement by the President.

But Dr Bernard Okoe-Boye, the Deputy Minister for Health admitted that indeed the figures do not give a true reflection but rather they aid the statistics of the health workers.

He added even the numbers appear to have been increased to create a certain impression per critical analysis, they give a significant number if the actual figures are used.

Dr Okoe-Boye explained that “if you’ve tested 50,000 of which some have to be tested two or three times, the figure [50,000] is needed for your statistics. Remember without that number of tests, you couldn’t have recorded the said figure…

“There are two ways to look at it…you look at it from the number of tests you’ve done, to show that you are investing resources into the number of the testing regime but in terms of the coverage I admit it if you want to take it out to have a true reflection.”

Ghanaians are already doubting the figures that are being recorded on the official COVID-19 website managed by Ghana Health Service.

On the website, the graph representation shows that already the data is flattened without any number of data from April 14 to April 19, 2020. As to what that means the health officials need to explain further. 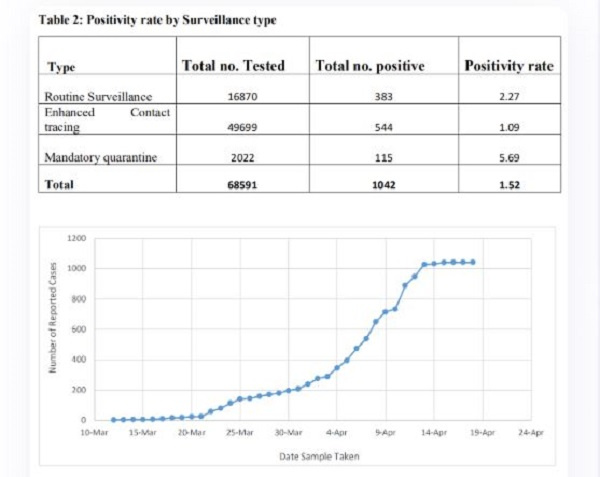