Ghana began its fight against the novel coronavirus on an impressively sound note that earned commendations from international agencies and experts.

The World Health Organization is on record to have praised the government for the timely and spread-controlling measures it instituted to deal with the virus.

At the heart of this feat was an effective collaboration between the citizenry and the government.

President Akufo-Addo’s ‘I can bring back the economy but can’t bring back lives,’ was at the time not just a mantra but backed by his actions as well as those of his appointees.

While encouraging citizens to strictly adhere to the safety protocols, government officials were leading by example and setting the pace for the populace to follow.

However, the actions of the President and some of his appointees in the last few months appear to be eroding the remarkable gains made at the early stages of the ‘war’.

From the NPP Primaries to Carlos Ahenkorah’s act of ‘callousness’, GhanaWeb brings you four instances state officials acted in contravention to the Covid-19 protocols.

“Yes, I have COVID-19 but on the first day of the registration, there was a problem at one of the centres. But knowing my status that I am asymptomatic, I visited only one centre to check on the issue. I acted maturely and never got in the midst of people,” these are the words of Carlos Ahenkorah who until this afternoon was a government appointee.

The deputy Trade Minister resigned following pressure from Ghanaians. Ahenkorah who tested positive for the virus and was fully aware of the isolation protocols went about his duties brazenly and saw nothing wrong with visiting a centre for the new voters register, despite cautions by his doctor for him to self-isolate.

The Tema West MP may have resigned but his bold show of nonchalant is seen as a representation of the lax in the Covid-19 fight. 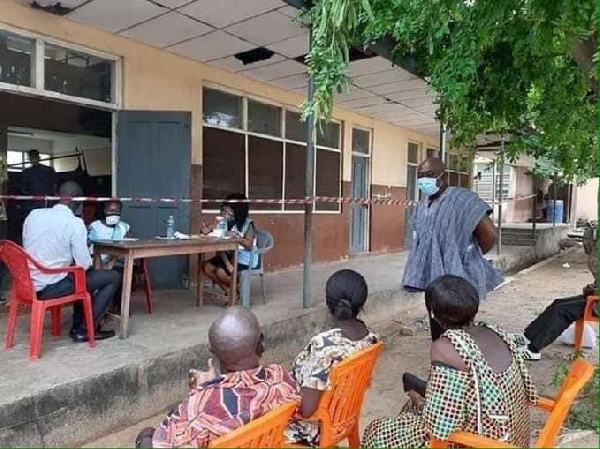 The President on Thursday, July 2 toured some registration centres to assess the process.

In some of the photos published on the president’s social media pages, Nana Akufo-Addo is seen acknowledging cheers from an overly excited crowd were clearly more than the 100 advised and had thrown social distancing cautions to the wind.

But it appears the President was more interested in ‘collecting fans’ than advising the overly excited crowd to be wary of the times and respect the measures.

In some of the photos, the President and some members of his entourage were seen to be closer than he has advised and also some of the EC staff were not wearing the face masks.

In one of the photos, the distance between the President and the closest person is less than the one-metre mark. 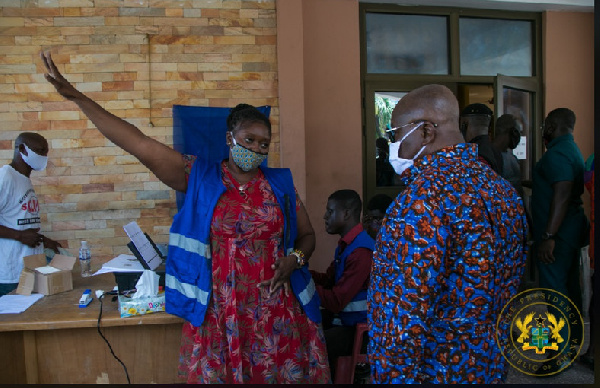 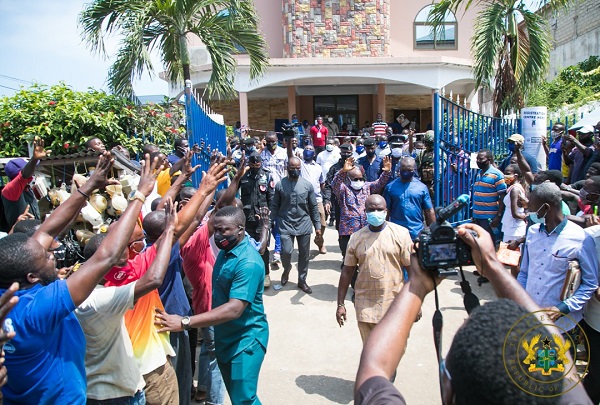 In the conditions for the return of religious activities, President Akufo-Addo allotted only one hour for the holding of services.

This move according to the President is based on advice by health professionals.

Also point 10 and 19 of the government’s guidelines was the avoidance of confined air-conditioned rooms and no waving of handkerchiefs respectively.

However, at Nana Akufo-Addo’s acclamation on Saturday January 27 at the Alisa Hotel, the ceremony lasted for over an hour in a fully airconditioned conference room.

The President’s favourite ‘Oye’ song and other songs were played with party members dancing and displaying NPP-branded handkerchief and flags.

Photos and videos and from the NPP Parliamentary primaries sent shocks down the spines of many people. MPs, candidates and supporters blatantly disobeyed the protocols.

Some candidates and their supporters were seen dancing and making merry with no adherence to the social distancing protocols.

Some of them were also seen interacting without face masks

Their punishment for breaching the law was an expression of regret by the President.

Meanwhile, some forty Ghanaians are standing trial for not wearing masks.

WATCH VIDEO: Fella Makafui Nearly Slips And Fall As She Wears New High Heels For A Photo Shoot; Medikal And Others Laugh At Her

JUST IN: “I haven’t stated that NPP has a majority in Parliament” -Speaker Alban Bagbin Clarifies | Video

38-year-old Bobi Wine has shaken up Ugandan politics: Four things worth knowing about him