Is Ghana’s premier health-care facility, Korle-Bu Teaching Hospital overwhelmed with patients? That is the claim being made by Facebook page, Twene Jonas TV.

In a Facebook post on February 15, the page that has more than 300,000 followers shared some images with one showing several patients sitting on the floor in a hallway, and another showing a ward that had hit its limits with some patients lying on hospital beds while others laid on mattresses on the floor.

According to the page, the pictures were evidence of the “current situation” at the Korle-Bu Teaching Hospital, the reason why the country’s Finance Minister nominee Ken Ofori-Atta travelled to the USA for “a special medical review”.

The Facebook Page has deleted one of the pictures earlier shared after it emerged it was originally taken at the 37 Military Hospital and not Korle-Bu, a simple view of the edit history of the post shows.

The now-deleted picture was first flagged by Journalist, Mabel Aku Baneseh who could be seen in the image and in a rejoinder said:

“I’m the one in the highlighted picture. I had knelt to interview a relative of a patient who was then on admission at the 37 Military Hospital in September 2016. That’s definitely not Korle-Bu Teaching Hospital as captured in the Twene Jonas TV Post.”

A reverse image search of the picture shows it was originally published by graphic.com.gh on September 27, 2016, and captioned “some of the relatives of patients on admission at the 37 Military Hospital sharing their experiences with Mabel Aku Baneseh.”

Using reverse image search, it was found out that the other two images shared by Twene Jonas TV are also not new and have been online since 2015 and 2018 respectively. 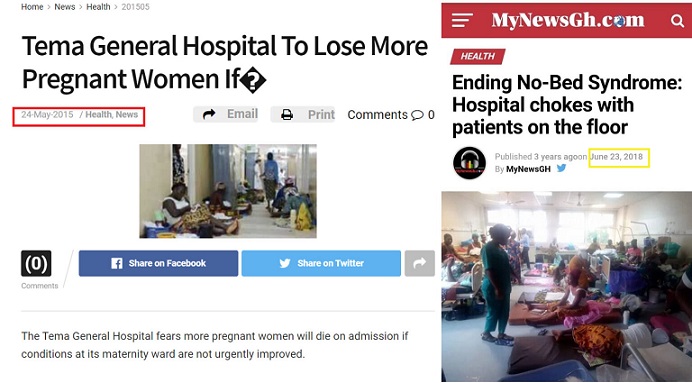 WATCH VIDEO: Social Media Users Call for Stonebwoy to Be Arrested After Allowing His 3-Year-Old Daughter to Drive Him in Town

Another Daughter Of Osei Kwame Despite Pops Up - Photos

2020 Is Your Retirement Year – Audit Service Board Tells Domelevo