~**LIONIZING THE PROMINENT KING WHO IS RESUSCITATING THE INCLINATION OF VISIONARY BODACITY,PLANNING THE FORTUNE FOR POSTERITY AND EXHIBITING THE ACT OF ALTRUISM ._*  ADMINICULAR PANEGYRIC FROM THE COMMUNICATION DIRECTORATE OF THE CLUB-ADUANA STARS F.C(OGYA).

The world was in acute regaling and exhilaration when an astute man was born.Due to his human dexterities,he was prognosticated to be a great brand of person.He scaled to educational ladder as being a high court judge.This was a graphic ipso facto of his opulent and auspicious man.He was also born and bred in a royal family and a heir to Dormaa-Ahenkro throne.Enthusiastically, he ascended the Dormaa throne after the demise of his grand uncle:the late Osagyefo Oseadeeyo Agyemang – Badu I in 1998.
This august day commemorates the birthday of such phenomenal king in Ghana and beyond tout court.

To quote chapters and verses of his kingship epoch-he was enstooled on June 7,1999 ,while Odeneho Fima* II,the Queen who succeeded her late mother Nana Akosua Nsuaa I,was enstooled on January 31,2000.
Until his enstoolment his moniker was Justice* Daniel Mensah (emanated from being a judge) but he aped from his de jure father’s throne name Osagyefo Oseadeeyo Agyemang Badu II (I.e the intuitive throne Orthodox nomenclature).

This sui generis king has channeled n infused his indefatigable work ethics to every developmental department in our life routine.Inter alia,he has introduced unprecedented peace,reconciliation and stability in our kingdom, which has engineered the rapport of cooperation among Chiefs and people at every nook and cranny.He has dealt with contentions and chief discordances at Dormaa,Akwamu,Aboabo Number 4,Chiraa,Nsuhia and many others.During the festivity of his 20th anniversary celebration of his enstoilment,Barima Ansu Gyeabour,the Krontihene of Dormaa and of Wamfie opined,”Osagyefo’s anniversary celebration is worthwhile and we will be grateful to him”.This depicts his chronic efforts he has showcased to his entourages and the country at large.

On education, the Dormaaman Traditional Education Endowment Fund (DORMEF),precipitated to subsidize the impecunious and brilliant students had eventuated scholarships to more than 2000 students in the area at various levels of education. His propensity for education in his kingdom fomented to his facilitation of the establishment of the school of Agriculture,and Technology and School of Geoscience of the University of Energy and Natural resources in Dormaa-Ahenkro.This enterprise has skirted parents who are woebegone to aid their wards due to their penury.

Last and more importantly, his passion for sports is inimitable. He has contributed mastodonically to Sports enhancement in the country.Aside the assistance he proffers to the Ghana Football Association, and the Premier League Board,Dormaa king has also founded the Aduana Football Club in 1985.Aduana stars have won the Ghana Premier League title two times.They annexed the flagship title in 2009-10 when the team ended the season as the fewest scoring side in the league,setting a world record for least productive champions with 19 goals in 30 matches which amassed them with 53 points.With an average of 0.6333 goals per match,they ravaged the all-time chronicle set by Trabzonspor

The Turkish Super Log side became Champions in 1978-80 with 25 goals in 30 matches (average of 0.8333).The second triumph was 2017 after the team had finished s runners-up in the previous year.It became the ninth club to win the Ghana Premier League in its 54-year-old momentous team career.

Under the aegis of Osagyefo Oseadeeyo Agyemang Badu II-exercising his monetary acumens.
The team have procured a stupendous and prodigious accolade;
*won super cup and Ghalca G6 cup on one occasion.
*Have appeared two times in CAF Champions League in 2011,which they ended in Preliminary round and 2018 also quitting in First round.
Another competition fronts are;

CAF Confederation Cup,which they honoured it in 2018 but haplessly omitted in the Group Stage.
*WAFU Club Championship, where they have appeared one,relegating them in the first round.

This is the reminiscent of the rattling good work our esteemed king,Osagyefo Oseadeeyo Agyemang Badu II has actualized.

MAY GOD IMBUE INTO U INEFFABLE KNOWLEDGE TO STEER YOUR TOWN,THE TEAM,SO AS GHANA WITH YOUR RESILIENT SPIRIT.
KUDOS OSAGYEFO OSEADEEYO AGYEMANG BADU II

THANKS GIVING AND ACKNOWLEDGEMENT

Dormaahene Dr.Osagyefo Oseadeɛyɔ Agyeman Badu ll is 21yrs.on the great stool.Nana therefore, received good will messages from the traditional council and other well wishers including the IGP

Mr.James Oppong-Boanuh, COP Mr.Edward Tabiri and top officials of Dormaa Divisional police at the Abanpreduase palace.The IGP praised Dormaahene for his good counseling and support for the

police in the area.Mr.Oppong -Boanuh wished Osagyefo all the best of God’s guidance and wished him long life. The Dormaahene commended the IGP for his service to duty saying he has been

following his performance .He urged him to continue his good and he and Nananom will always remember him in prayers .The IGP and his delegation presented assorted drinks and an undisclosed

In 1999, a heated succession race for the Dormaa Stool ensued following the death of Osagyefo Oseadeeyo Dr Agyemang Badu.

There were four contestants and in the final analysis, a 33-year-old private legal practitioner in Sunyani, Mr Daniel Mensah, was chosen and enstooled as the Omanhene with the stool name, Osagyefo Oseadeeyo Agyemang Badu II.

What a scene it was when the chiefs of the Aduana Clan in the country led by the then Esumejahene, Odeneho Oduro Numapau II (now deceased), introduced the young lawyer to a gathering of chiefs and people.

Twenty years on, tomorrow, Saturday, December 21, 2019 in the historic town of Dormaa Ahenkro, Osagyefo Oseadeeyo Agyemang Badu will not only celebrate his 20 years on the stool with a grand durbar, but will be doing so alongside his sister and Queenmother of the Dormaa Traditional Area, Odeneho Akosua Fima II, who is also 20 years on the stool.

In the words of Osagyefo Dr Agyemang Badu, the Omanhene of the Dormaa Traditional Area, “Dormaa has a unique and complex history and we can say with certainty that it is the only traditional state in Ghana whose migration in search of settlement took a longer distance than any other clan in West Africa”.

Historical records say the search for the settlement of the Dormaas covered a long distance and took a long period of time running into a quarter of a century.

According to www.dormaaman.com, the Dormaas formed part of the Akwamu Empire which for some time became the most powerful kingdom in the Gold Coast.

The Dormaas, then Akwamus, first settled in Cote d’Ivoire from where they moved to establish their first capital town at Twifo Heman to the north-west of Cape Coast.

Finally, they settled at Warn Pamu which was renamed Dormaa-Ahenkro in 1949.
As at now Dormaa comprises about 140 towns and villages located in six administrative areas in the Bono and Ahafo regions 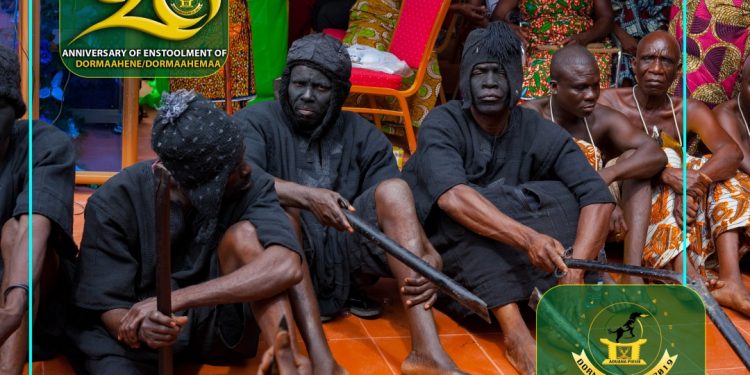 Generally, the Omanhene has been able to maintain peace and stability in the Dormaa state. This is very key because once he did that, it propelled him to do other things to help his people.

Among chieftaincy disputes he has settled includes one at Dormaa Akwamu, Aboabo Number 4, Nsuhia and Chiraa.

“Presently with the exception of Bomaa where the people say they don’t like the chief, I can say that there is no chieftaincy dispute in the kingdom,” the Dormaahene told me during an interaction at his palace in Dormaa Ahenkro last Saturday.

Judicious use of resources

On ascending the stool in 1999, Osagyefo Agyemang Badu instituted the Dormaaman Educational Endowment Fund (DOMEF). To date, the fund has supported about 4,000 people with bursaries and scholarships.

“If you support brilliant needy students, you spur growth,” he emphasised.

He admits that the central government alone cannot do all so the traditional council, of which he is the President, has given support to educational institutions in the form of cement, computers and other materials.

He had also applied resources of the traditional council to construct water closets in some of the schools in communities such as Wamfie and Dormaa Ahenkro.

Osagyefo Agyemang Badu is a traditional ruler who strongly believes that the occupant of a stool should try and map out strategies that will improve infrastructure in his domain because the central government alone cannot do it all.

“Of course we are partners in development, and the fact is that we hold the land in trust for our people. The land is not for us so we should use the resources to better the lives of the people.

“The Dormaa state has a lot of resources. Even if you go to Sunyani, a good chunk of the land there belongs to our stool, so the revenue that comes to the stool, we try to use it judiciously so that we will be able to provide some of the infrastructure for our communities,” he said.

Last week, a new divisional police headquarters which was financed with stool land revenue was handed over to the Ghana Police Service.

The Dormaahene is a champion of preservation of forests. He has planted a lot of timber species and placed an embargo on mining, whether small scale or large scale in his traditional area.

He says until the nation is able to fashion a system where Ghanaians will get an appreciable chunk of the proceeds from mining, he would not allow mining in his area.

“My land is full of gold, right from Bomaa to Dormaa; it is full of gold deposits. Bomaa shares a boundary with Newmont Mines but I won’t allow anyone to come to my area to mine unless I know how much Ghanaians are going to get and know that the mining won’t affect my people, their livelihoods, their water, the air and the environment,” he said.

Aware of the fact that sports is one area of interest for the youth and which generates employment, the Dormaahene, in conjunction with the district assembly, has instituted measures to develop sports infrastructure.

A stadium that can seat 6,000 spectators and with a doping centre has been constructed at Dormaa Ahenkro. It is the home ground of Aduana Stars FC, a premier division team belonging to the traditional council.

Within nine years of Aduana Stars’ participation in the Ghana Premier League, they have won the league two times.

June 4 Revolution: Testimonies of people who lived in the moment