In a now-viral “Termination of appointment” letter reportedly from the HR of the company to terminated staff, the affected staff were instructed to stop work as at today, 19th June, 2020 without any strong reason.

The company promised to pay them one month basic salary in lieu of notice.

See a copy of the said sack letter below.. 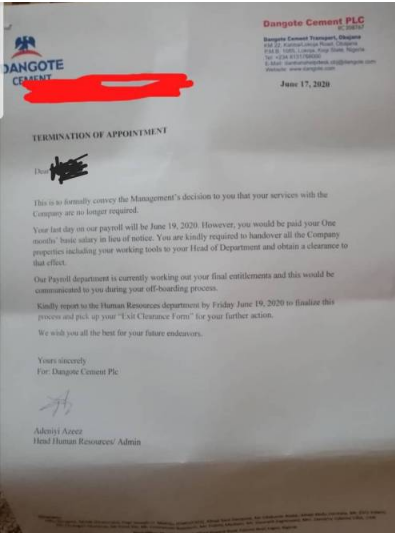 According to Sahara Reporters,  a source in the company said they continued to work in overtime during COVID-19 restrictions placed on all businesses due to Dangote’s association with President Muhammadu Buhari.

Recall that the government had shut down the operation of every business within the country due to the Coronavirus  outbreak with exemptions for food processing and manufacturing companies only.

Dangote Cement is not an agricultural company or food processing organisation but continued to operate.

Despite the violations of this guideline put in place by the President, the company recalled staff in the middle of a pandemic to work, the source said.

A victim of the mass sack told SaharaReporters on Friday that he was at his duty post working like usual when he was called and forced to sign a letter of termination of appointment without prior warning or notice.

He said, “As I speak to you, more than 3,000 people are being sacked. You will be at your duty post and they will call you and give you a letter, nobody knew, no prior notice.

“As a matter of fact, after the appraisal at the start of the year, many of us were given recommendations to be promoted to manager and other positions within the organisation.

“I was at my duty post, I got a call from the admin and when I got there, they gave me a letter and said I should sign the original collected by me, you cannot argue with anybody.

“As a matter of fact, the Head of Materials and Maintenance, Engr Basil, he has only nine people in his unit. He force them to cover the whole of the facility because they have to create evaluations for materials and make reservations for maintenance so when was asked to submit the names of nine people in his department to sack, when he refused explaining to upper management that he was already understaffed and taking out anyone will make the work to suffer. They gave him an ultimatum of 24 hours to submit names from his team for sack and when he refused to do it after it elapsed, he was sacked along with his team.”

Reacting to this news, Nigerians took to social media to drop their opinions. See some below…

“After pledging 1billion naira, did anybody ask him to support the government?”

“Richest man in Africa, be assured nothing will be done”

“Buhari has nothing to do here. All the things he sell and produces were allowed production during the lockdown. Esencial commodities which includes foods items were given passes. Construction sef.”