An Ashaiman based charcoal seller and mother of 3, Mariama Alhassan, has revealed a touching story of how the Government intervened to rescue her brilliant who had A1 in six subjects in the 2019 WASSCE from being a school drop out.

Mariama’s son, Alhassan Muntari was one of 40 students from deprived and Zongo communities granted a scholarship by the government to study medicine in Cuba, and the single mother revealed that the circumstances under which her son was selected among the 40 students was a divine intervention through the Vice President.

“My son is very brilliant and he did so well in secondary school but due to financial constraint, his dreams of pursuing further education had been dashed until we got a surprise call from the Office of the Vice President Dr Mahamudu Bawumia. I was very surprised, but that changed everything for us,” the mother said during an emotional interview.

Her son, a day student who attended the nearby Chemu Senior High from their base in Ashaiman, recorded one of the best results in the 2019 WASSCE.

His remarkable record included A1 in Mathematics, Elective Mathematics, Integrated Science, Biology, Physics and Social Studies Studies. But inspite of his incredible academic brilliance, young Muntari remained could not go to the University last year as his mother struggled to raise enough money to send her boy to school.

“He wanted to go to the university to become a captain but there was nothing I could do because I didn’t have the money and I am the only one who takes care of him and his two other siblings,” said Mariama Alhassan.

“I tried my best to seek help but I didn’t get so he had to be at home and I was worried because he had done so well but there was nothing I could do. Some of his friends and people he knew who were aware of what he has achieved were also concerned so a took his results around trying to get assistance for him.”

The mother revealed that through the efforts of this friend, her son’s WASCCE results slip was sent to somebody who also posted in on Facebook to solicit for support and that got to Dr Bawumia who responded swiftly after one of his aides drew his attention to it. 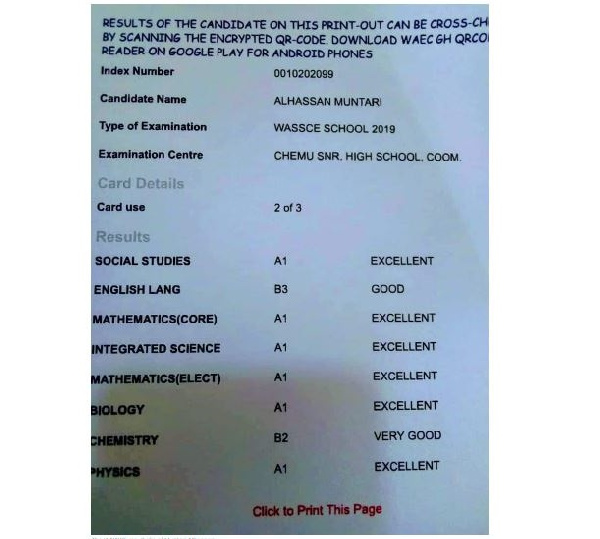 “I was there and I had a call and the person said he was calling from the Office of Dr Bawumia. The person asked if I’m the mother of Muntari and when I answered yes, he said Dr Bawumia has asked for details of my son and that the government wants to support him by giving him scholarship to go and study abroad.”

“I was really surprised because I don’t know any big man to think that person has done this for me. I was so surprised I wasn’t even sure it was true. But it turned out to be true and it has changed everything for us and given us hope again.”

Her son, and 39 others in similar situations from other Zongo and deprived, have since left Ghana for Cuba to start a new life; a six-year course in medicine to become medical doctors. The course will be fully paid for by the government through the Zongo Development Fund, a special fund established by the Nana Akufo-Addo government to oversee the development of Zongo communities.

The mother was full of praise for Dr Bawumia for his intervention, as well as President Akufo-Addo and his government for initiating such policies to give “people like us” hope.

“The selection of my son was divine and I thank Allah for that,” she said.

“I can’t thank Dr Bawumia enough for what he has done; coming to our aid when he doesn’t even know us. I still can’t believe it and I don’t want to talk much. I can only pray to Allah to continue to bless Dr Bawumia so that he can continue to do more for many other families in need and the whole country.”

“I also thank Nana Akufo-Addo and his government for coming up with such a policy to give people like us hope. How could I have sent my son to school abroad without this support by the government?.”

“My second child is also in SHS 1 enjoying free senior high school. I didn’t pay anything so I must say that I am really happy and thankful.”

“May God continue to bless Nana Akufo-Addo and Dr Bawumia so that more people in similar situations like us can also benefit from such support from the government.”

“I also pray for all the children who have been sent to Cuba to be successful so that they can come back safely to serve Ghana.”

Watch Video: “If You Are Pregnant For Kwesi Arthur, Please Don’t Abort It” – Kwesi Arthur’s Father To Slay Queens (Video)

Mahama calls for meeting of ECOWAS leaders to strategize against coronavirus

Ghanaian SMEs to get GH¢1bn, other relief packages to mitigate coronavirus losses.