Scores of supporters of some opposition political parties on Tuesday besieged the Central Regional offices of the Electoral Commission (EC) in protest of the compilation of a new biometric voter register.

The red-claded and placarded members took to the streets of the Cape Coast Metropolis and converged on the premises of the EC, where its leader, Lawyer E.K.T Addo, delivered a petition from the group to leadership of the Commission.

Members of the group which included political party members from the National Democratic Congress (NDC), the People’s National Convention (PNC), the Ghana United Movement (GUM) and other parties later handed over the petition to the Deputy Regional Director of the EC, Philomina Edusei, who promised to send the petition to the appropriate quarters for redress.

Some of the placards read: “The New Register is a waste”, “New money for roads, hospitals, schools not new register” , among others.

In their petition, the group described as “senseless” to spend huge amounts of money for a new biometric register.

They accused the Akufo-Addo-led administration of scheming to rig the upcoming general elections.

“We have come here to register to protest. We are part of Ghana. We want to remind the EC that we shall continue to oppose this new register until sanity prevails”, said the Central Regional Chairman of the NDC, Lawyer EKT Addo.

The group, therefore, asked the EC Chairperson to withdraw the policy to salvage her image and save Ghana from unnecessary waste of resources.

This development comes after the leadership of the Inter-Party Resistance Against the New Register announced a resumption of its mass action in protest of a new voter register.

This is as a result of what it says the bad faith shown by the Electoral Commission as it announced a new date for a mass registration exercise despite a planned meeting with the Eminent Advisory body of the EC.

Led by the biggest opposition NDC, the group had earlier staged series of demonstrations in Tamale in the Northern Region dubbed “Tikusayi demo” and Kumasi in the Ashanti Region also dubbed, “Yempini demo” 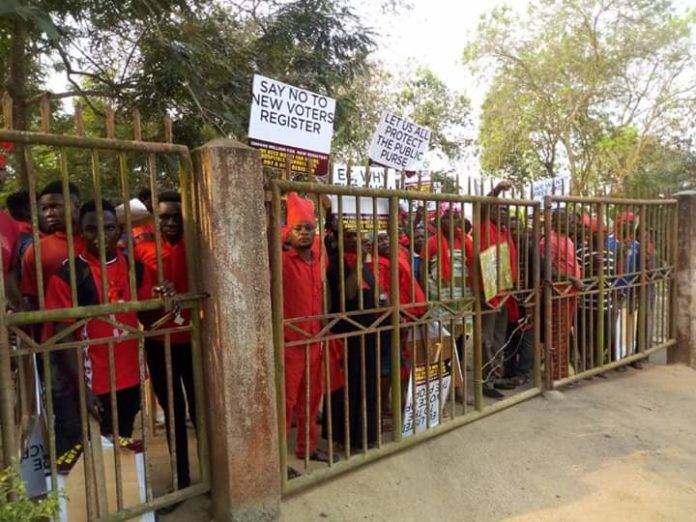 “In view of the conduct of the EC, the Resistance wishes to announce our inability to oblige with the earlier announcement of the momentary suspension of our public manifestations and further declare that, we shall proceed with the series of mass actions earlier outlined”, the opposition parties said in a statement last week.

Ghanaian boxer, Patrick Allotey destroys the face of a Kotoko fan with punches & a technical knockout for jubilating over their win (VIDEO)