Popular Instagram blogger, Cutie Julls who was cursed by Medikal has reacted and has proved that he still stands by his allegation.

Cutie Julls alleged that Medikal has impregnated another lady and she will soon deliver to the rapper’s second child.

This allegation was spotted on the blogger’s Instagram page on Thursday, 3 December.

Shortly after the news was broke by the blogger, Fella Makafui jumped on her Twitter page and screamed in shock as she reacted to the allegation.

Ghanaian rapper Samuel Adu Frimpong popularly known as Medikal has finally responded to allegations that he’s expecting a child with another lady.

The blogger who was among those who alleged that Medikal and Fella were expecting their baby and indeed it was true has hit back at Medikal.

According to the blogger’s reaction, he was not afraid by Medikal’s curses on him but he still stands with his allegation.

He advised Medikal to protect himself if he doesn’t want any child and wants to mess around with other women.

The blogger said the screenshot of Medikal’s curse and wrote:

@amgmedikal, I wanted to ignore you but let me clear this.

Just like the way your wife Fella ranted and blocked this account when we announced that she was pregnant, guess what? She gave birth and we all witnessed her childbirth to the glory of God.

Medikal, I don’t curse but at this point we are only saying your words should manifest in your life if you as much try to let the innocent girl come close to abortion just to make this gist look otherwise. HIV is real. Bro, if you can’t cut down with the women, its fine cuz even David in the Bible had his way with his clique’s wife but please We love you so we are saying, Bra please eyaa use condom wai 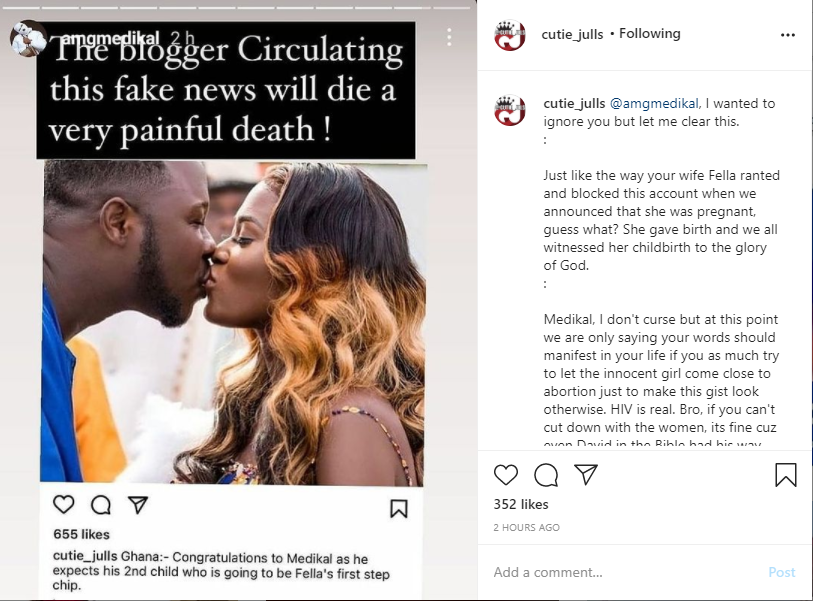 WATCH VIDEO: Moment a small plane crashes into a moving SUV in emergency landing on a highway