(CNN)The streets of Ecuador’s western city of Guayaquil are deserted, with few residents in sight — and a few dead, as bodies are being left in the streets of this overwhelmed place.

The coronavirus pandemic is overloading the public services in the country’s most populous city to a point of collapse. Hospitals have no beds left to accept sick patients, and morgues, cemeteries and funeral homes are straining. With no place left to put them, some residents say they have no choice but placing them outside.
It’s unclear how many of the deceased are dying because of Covid-19. Many families say their loved ones had symptoms of the virus, while others only know the ill were unable to be treated at Guayaquil’s overwhelmed hospitals.
“We have been waiting for five days,” Fernando Espana said in a video obtained by Reuters on March 30, as he complained about the struggles to have authorities come pick up his family member.
“We are tired of calling 911 and the only thing they tell us is to wait, they are working to solve this,” he continues as he moves the camera through a window to show a black plastic-wrapped shape inside the home, with two fans blowing on it. 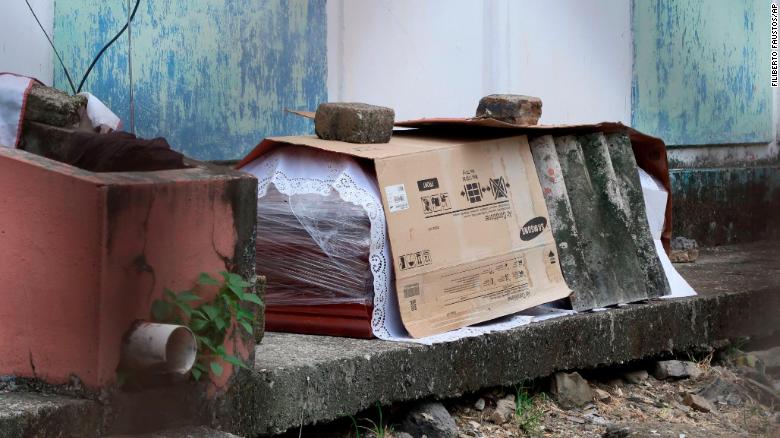 A coffin containing the body of a person who is supposed to have died from Covid-19 lays wrapped in plastic and covered with cardboard, outside a block of family apartments in Guayaquil on April 2.
The smell is too much to take. “It’s the odor from the body that one can no longer handle,” Espana’s neighbor, Glenda Larrea Vera says in the same video, from across the street and behind a mask. “And we also have neighbors that are elderly. I have my mother who is 80 who is also having respiratory problems.”
Video surveillance from last week obtained by CNN shows a motorcyclist abandon a body in the street. Hours later, a group of people, dressed in special hazmat suits are seen picking up the deceased, then driving off in a vehicle.
In another video obtained by CNN, a group of people remove a body from a car. Covered in face masks, they wrap the body in a what appears to be a black tarp when a police vehicle approaches minutes later. A conversation takes place and the group puts the body back into the car. Police tell CNN they could not offer details about the video.
National figures show that Ecuador’s authorities have collected more than 300 bodies from private homes in the city — which has 2.99 million residents, according to the CIA Factbook — between March 23-30.
The city is on the Guayas River and is the nation’s major port. Brittanica.com calls it the country’s most economically important city.
Jorge Wated, head of a joint military task force created to deal with Ecuador’s coronavirus crisis, in a televised interview on Wednesday said that his task force had gone from “taking away 30 deceased per day to 150” over the past three days. Wated added that this was “independent of the hard work reactivated by the private funeral homes and graveyards in the country.” 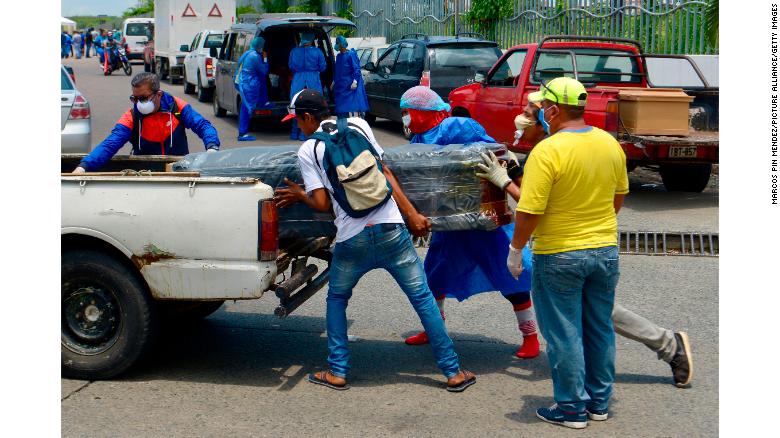 Men with protective suits load a coffin into a car in front of a Guayaquil hospital.
Guayaquil’s mayor Cynthia Viteri has desperately begged for help from the national government in a video posted to her Twitter account last week. “What is happening in the country’s public health system? They are not taking away the dead from houses, they’re leaving them on the sidewalks, they’re falling in front of hospitals. No one wants to pick them up,” she said, adding later, “we need to know the causes of why people are dying in their homes.”
“What happens with our sick too?” she adds. “The families roam throughout the city knocking on doors so they can be taken care of or that a public hospital receives them where there are no more beds and they close the door and leave them outside.”
With hospitals beyond capacity, some people are dying as they wait for medical care. One Guayaquil woman died in a wheelchair at a hospital while waiting to be seen in an emergency room. According to a hospital source who asked not to be identified, there were no beds available and her body was left out for almost four hours before it was taken away. The cause of death has not been determined.
As of Friday, Ecuador’s National Service of Risk and Emergency Management Department reports 3,368 confirmed coronavirus cases and 145 fatalities nationwide, of which 102 are registered deaths in Guayas province, where Guayaquil is located. But some citizens are concerned that confirmed positive cases of infection are higher than what is being reported by the Ecuadorian government, and they are demanding action, something happening in other countries too as delays and lack of testing cause frustrations. 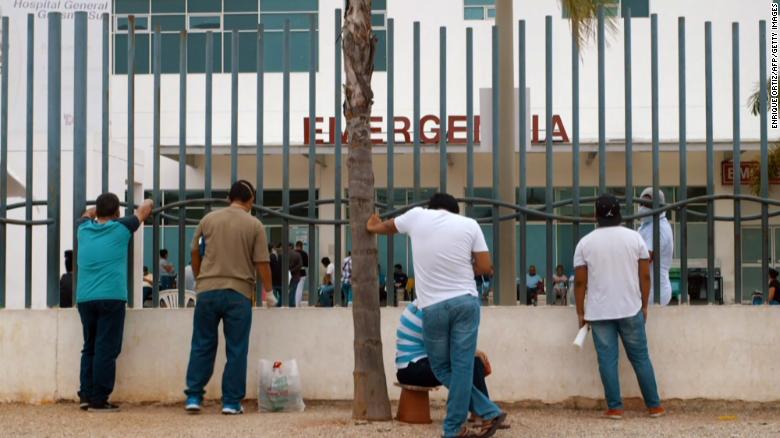 Relatives wait outside of a hospital for information on family members infected with Covid-19 in Guayaquil on April 1.
President Lenin Moreno during an address to the nation Thursday called for transparency at all levels of government regarding the numbers caused by the crisis. “It’s important to tell the truth,” Moreno said, adding that in “both the number of cases and deaths, the records fall short.”
Wated, the task force chief, has said that experts expect between 2,500 and 3,500 deaths in the coming months in Guayas alone.
Several containers have arrived in Guayaquil to serve as temporary morgues to accommodate the influx of bodies, and authorities say they plan to create space for “dignified burials.”
But for now, some of the living in Guayaquil remain trapped in a nightmare, with no way to mourn their loved ones, not even through a proper burial.

Loading...
Tags
Bodies are being left in the streets in an overwhelmed Ecuadorian city.

You Stand A Higher Chance Of Contracting Covid-19 If You Have Hypertension, Diabetes Mellitus...

Sèx Before Marriage Is The Best, Because Most Men Of Today Are Lazy In Bed – Afia Schwarzenegger | Video