Forcefully-retired Auditor-General Daniel Yaw Domelevo has described as “preposterous”, a formal request sent to him by the Audit Service Board that he officially hand over to his Deputy, Mr Johnson Akuamoah Asiedu.

Mr Domelevo replied the request indicating he handed over to Mr Asiedu in June 2020 when he was forced by President Nana Akufo-Addo to go on leave for 167 days.

Upon his resumption of work on March 3, Mr Domelevo said Mr Asiedu did not hand over to him before the President ordered him (Domelevo) to go on retirement the following day. 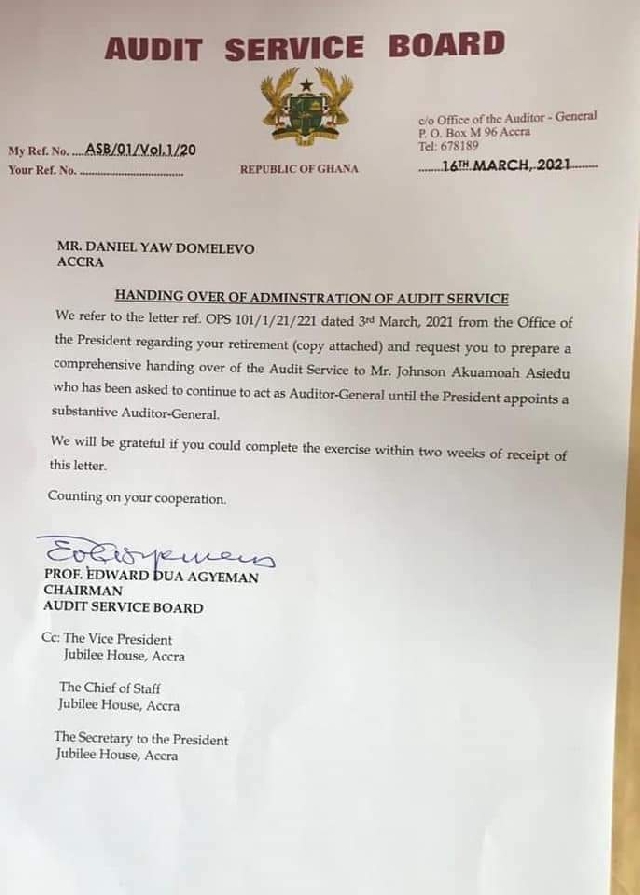 “I prepared a handing-over note and handed over to the Acting Auditor-General on 30th June 2020 and he has been in charge for over 8 months”, Mr Domelevo said in his reply to Professor Dua Agyeman, the Audit Service Board Chairman, adding: “When I resumed work on the 3rd of March 2021, Mr Johnson Akuamoah Asiedu did not hand over to me with the excuse that the handing-over note was not ready”.

He nonetheless said: “If you so wish, please direct the Acting Auditor-General to hand over to me and I will thereafter handover to him”. 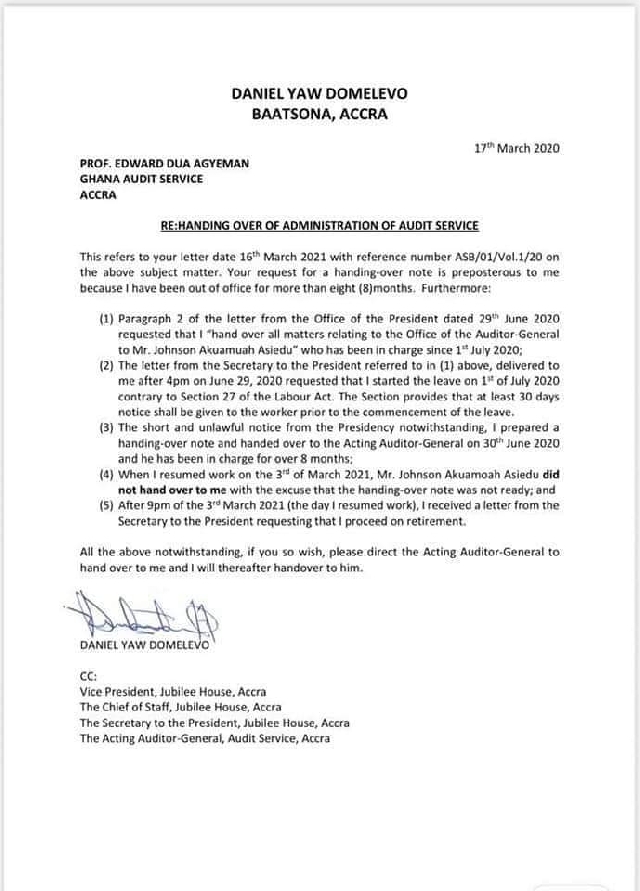 President Akufo-Addo asked Mr Domelevo to go home since, according to him, he had passed the compulsory retirement age of 60.

In a letter dated 3 March 2021, the President, through his executive secretary, Nana Bediatuo Asante, said: “The attention of the President of the Republic has been drawn to records and documents made available to this Office by the Audit Service, that indicate that your date of birth is 1st June 1960, and that in accordance with article 199 (1) of the Constitution, your date of retirement as Auditor-General was 1st June 2020.”

The Board wrote to him the day before challenging his Ghanaian nationality and age.

The Board said his own Social Security and National Insurance Trust records show he is a Togolese and not a Ghanaian and also due for retirement.

The Board, in a series of correspondence with Mr Domelevo, said he was born in 1960 per his own records and, thus, should have gone on retirement mid-2020.

In a letter dated, 26 February 2021, the Audit Service Board said: “Records at the Social Security and National Insurance Trust (SSNIT) completed and signed by you indicate your date of birth as 1st June 1960 when you joined the scheme on 1st October 1978. The records show that you stated your tribe as Togolese and a non-Ghanaian. That your home town is Agbatofe.”

“On 25 October 1992, you completed and signed a SSNIT Change of Beneficiary Nomination form, stating your nationality as a Ghanaian and your home town as Ada in the Greater Accra Region. The date of birth on your Ghanaian passport number A45800, issued on 28th February 1996 is 1st June 1961. That place of birth is stated as Kumasi, Ashanti Region,” the letter said.

In his reply, Mr Domelevo explained that his grandfather, Augustine Domelevo, was a native of Ada in the Greater Accra Region but migrated to Togo and stayed at Agbatofe.

“Either my father wrongly mentioned Agbatofe in Togo as his home town to me, or I misconstrued it at the time”, Mr Domelevo explained, adding: “My mother is also a Ghanaian”.

Concerning his date of birth, Mr Domelevo said he noticed that the 1960 date of birth was a mistake when “I checked my information in the baptismal register of the Catholic Church in Adeemmra.”

“The register has Yaw as part of my name and also provides my date of birth as 1st June 1961 – this corresponds with Thursday or Yaw – the day of the week on which I was born.”

The Audit Service Board, however, said: “Observation of your responses and explanations contained in your above reference letter make your date of birth and Ghanaian nationality even more doubtful and clearly establishes that you have made false statements contrary to law.”

“Records made available to the Board indicate that your date of retirement was 1st June 2020 and as far as the Audit Service is concerned you are deemed to have retired,” it noted.

“By a copy of this letter, the Board is informing the President, who is your appointing authority, to take necessary action. Additionally, the Board is making available to the President all the relevant documents at our disposal.”

A statement released by the office of the President and signed by the Director of Communications, Mr Eugene Arhin, on Monday, 29 June 2020, said: “The President’s decision to direct Mr Domelevo to take his accumulated annual leave is based on Sections 20(1) and Labour Act, 2003 (Act 651), which apply to all workers including public office holders such as the Auditor-General.”

Mr Domelevo was said to have taken only nine days of his annual leave.

But reacting to the directive from the president in a letter addressed to Nana Asante Bediatuo, the Secretary to the President, Mr Domelevo said: “My knowledge of recent labour and practice in the country is that no worker is deemed to have accumulated any leave on account of their having failed, omitted, neglected or even refused to enjoy their rights to annual leave, which the law guarantees for their benefit, not the employer.”

He stated that to the best of his knowledge, therefore, “wherein any given year a worker fails, omits, neglects or even refuses to take their annual leave such leave is deemed forfeited with no corresponding obligation on the part of the employer to enforce the workers right to take their leave by assuming, deeming or declaring the forfeited leave accumulated.”

“I am also informed that by law, every person is entitled in some in very limited circumstances, to wave what the law has ordained for their benefit, in this case, a worker’s leave. Be that as it may, the directive that I proceed on leave and hand ‘over all matters relating to the office to Mr Johnson Akuamoah’ with all due respect has serious implications for the institutional independence of the office of the auditor general,” the letter said.

A petition presented to the office of the President, signed by some 1,000 Ghanaians living abroad and led by Lolan Sagoe-Moses and Korieh Duodu, with regard to Mr Domelevo’s leave directive, asked that the directive be reversed, noting that it would make him incapable of acting as Auditor-General.

The petition stated: “We question how the public is expected to consider such a decision as made in good faith, in circumstances where the Auditor-General is essentially being asked to make himself well-rested and refreshed for the commencement of his retirement. Mr Domelevo’s absence, during this 167-day period, would mean he will not be able to actively execute his Constitutionally-prescribed role as protector of the public purse during the crucial 6 month period before the general election, a period.”

However, responding to the petition from the Ghanaians abroad, Secretary to the President, Nana Asante Bediatuo indicated that President Akufo-Addo’s stance on the leave directive had not changed.

E/R: Timber falls from truck; one dead, another in critical condition

Ayisha Modi Promises To Give Ghc2000 To Akuapem Poloo’s Son, Mother And A Plot Of Land When She Returns Home