Member of Parliament for North Tongu constituency, Mr. Samuel Okudzeto Ablakwa has alleged that the NPP government is planning to restrict MPs from freely voting for their own choice of candidate for the Speaker of Parliament position.

According to him, the government in a bid to impose its own Speaker of Parliament is plotting to violate Article 104 (4) and Order 9 (1) by seeking to inspect ballots of MPs in their respective caucuses on behalf of the ruling party.

In effect, the North Tongu MP has charged all Members of Parliament to passionately oppose any form of intimidation and insist that the secret ballot rule which is employed when appointing a Speaker of Parliament is religiously adhered to.

“Article 104 (4) of the 1992 Constitution and Standing Order 9 (1) demands that the election of Speaker shall be done by secret ballot. It is absolutely imperative that this constitutional requirement is strictly complied with to enable MPs of the 8th Parliament vote freely and according to their conscience. We must all begin a spirited campaign to insist that the secret ballot rule is religiously adhered to.

MPs-elect in good standing must start sending a clear message to those plotting to violate Article 104 (4) and Order 9 (1) by seeking to inspect ballots of MPs in their respective caucuses ostensibly on behalf of party officianados as has happened in recent times that their manoeuvres will be fiercely resisted. It is my hope that the current Clerk to Parliament, Mr. Cyril Nsiah, a man I have enormous respect for, would ensure that the sanctity of Ghana’s Constitution and Parliament’s Standing Orders are resolutely preserved.” He stated in a Facebook post on December 28, 2020.

Notwithstanding, Mr Ablakwa stated that history is about to repeat itself as the last time two persons were nominated for the position of a Speaker by both the NDC and the NPP concurrently was in 2005 when Mr John Dramani Mahama and President Nana Akufo-Addo were members of the House.

“As we approach midnight of January 6, 2021; I am reminded of Karl Marx’s famous edict: “history repeats itself, first as tragedy, second as farce. Quite fascinating to observe that the only time since the inception of the Fourth Republic that two persons were nominated for the position of Right Honourable Speaker by both the NDC and the NPP concurrently was in 2005 when John Dramani Mahama and Nana Akufo-Addo were members of the august House.

15 years down the lane, these two who were later to both ascend the presidency are most likely to lead their respective sides to repeat the historic development of January 7, 2005, albeit this time from outside the chamber and with more competitive numbers,” he wrote. 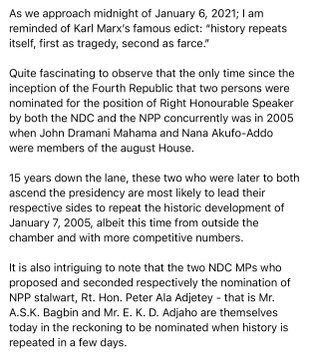 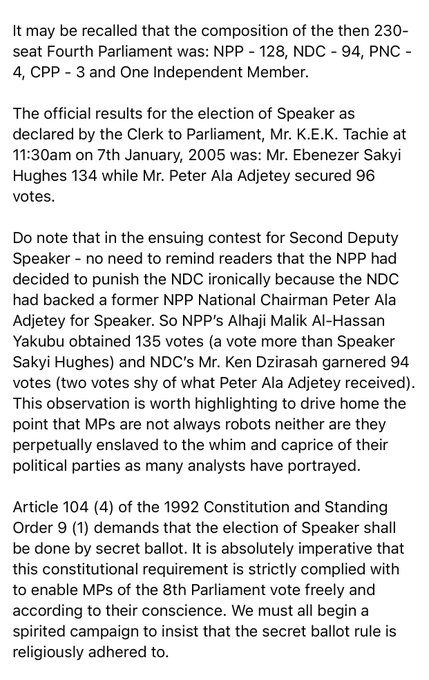 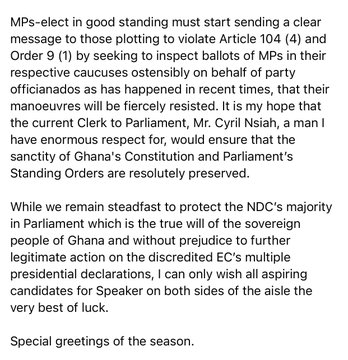 There was no Results Collation in Techiman South – Samson Ayenini confirms